Heat waves are replacing drought as the deadliest climate disaster

Share All sharing options for: Heat waves are replacing drought as the deadliest climate disaster

In the 1980s, droughts were one of the world's deadliest natural disasters, triggering food shortages and causing at least half a million deaths in Ethiopia, Sudan, and Mozambique alone.

But according to a new report from the World Meteorological Organization, the number of deaths attributable to drought appears to be declining over time. (Update: Though see the note at the bottom for a few caveats here.*) One possible factor here? Many countries have become more adept at staving off famine during dry spells. 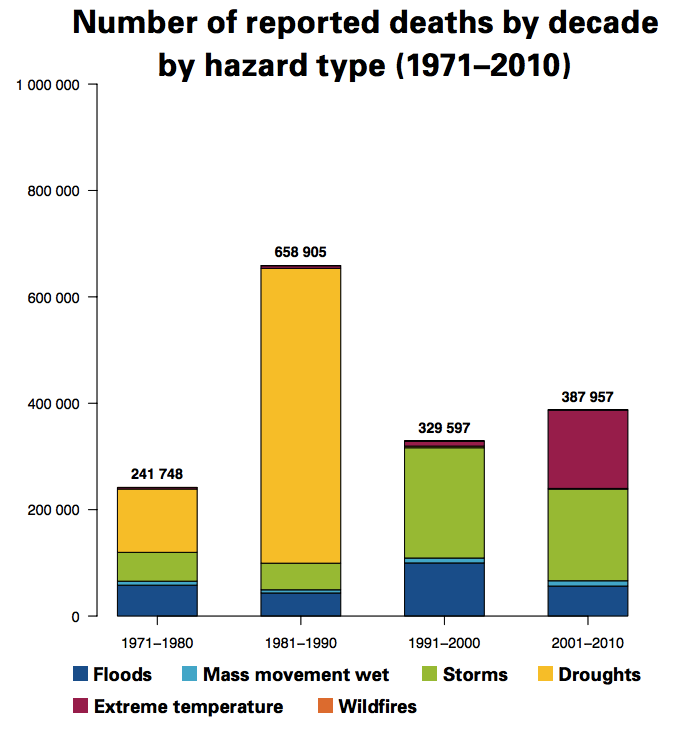 The WMO report looked at climate and weather disasters between 1970 and 2010. (Note, that the data ends in 2010, so it doesn't include the recent Somalia famine, which killed many thousands and was triggered by a mix of drought and violent conflict.)

It's possible for vulnerable countries to adapt to natural disasters

Among other things, the WMO argues that weather-related disasters — including floods, storms, droughts, heat waves, and wildfires — have become more destructive overall since the 1970s. That's partly because heavy rain and floods appear to have become more frequent. But, as previous reports have cautioned, it's also because the world is growing and there are more people living in disaster-prone areas.

The chart above does suggest one bright spot here, however — it is possible for vulnerable countries to adapt and reduce the damage from natural disasters, as countries like Ethiopia have done with drought since the 1980s. Given that extreme weather is expected to become more common as the planet warms, these sorts of adaptation efforts will become increasingly crucial. 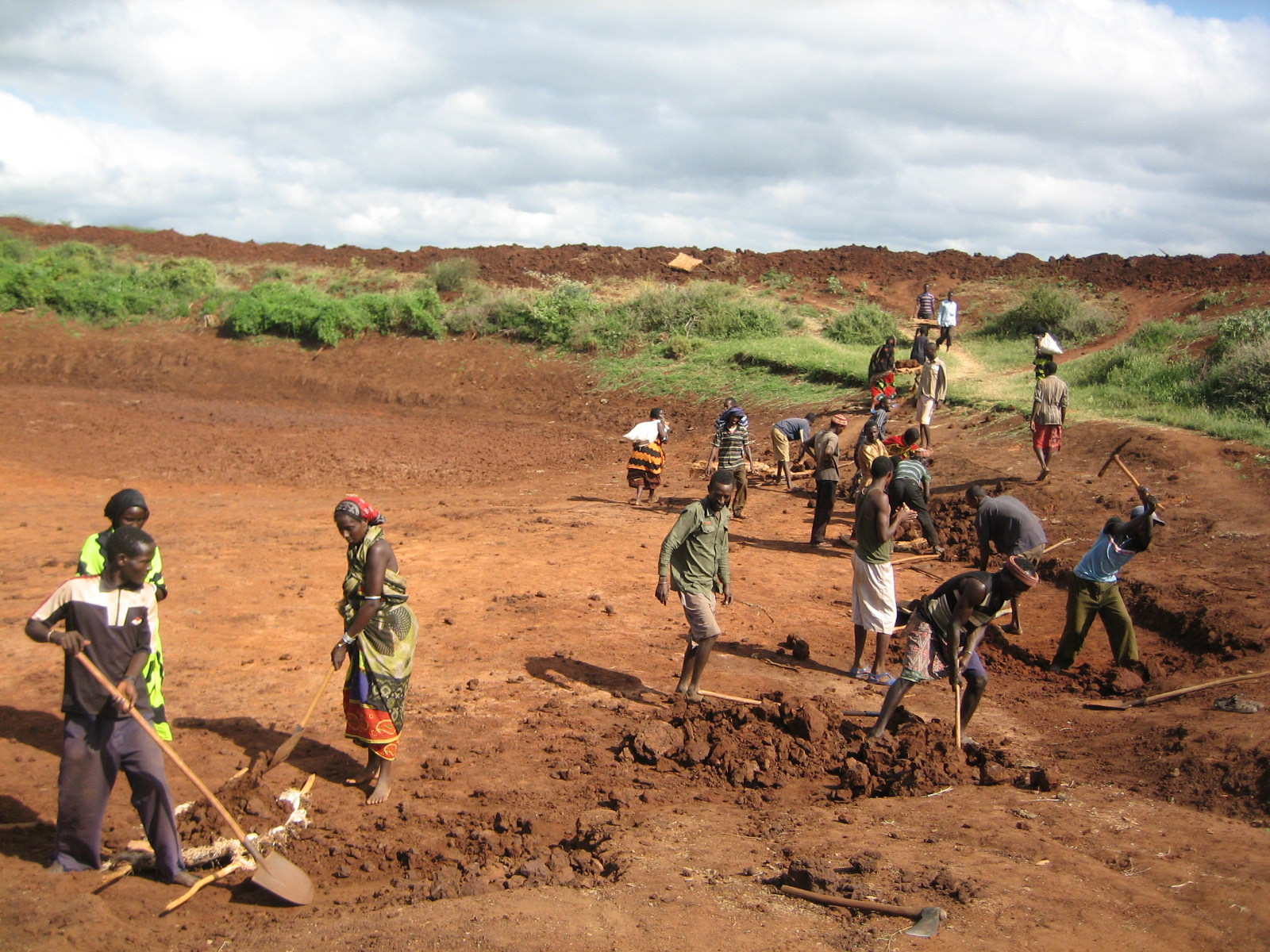 Workers digging an artificial pond. The pond is one of many initiatives supported by UNDP to bring water and temporary work to the drought-affected region of Borena in the Oromia region of Ethiopia. UNDP Ethiopia

Ethiopia is a good case study here: Back in 1983-85, several consecutive years of low rainfall triggered by a strong El Niño led to a widespread famine that killed at least 300,000 people in the northern part of the country.

But this wasn't entirely a "natural" disaster. The famine that followed was exacerbated by a slew of man-made factors — including an ongoing insurgency and civil war in the country, a slow response from international donors, and a government that was re-directing food away from civilians and toward its own militias.

In the decades since, Ethiopia has taken a number of steps to better prepare for drought. Crucially, the country now has an early-warning system that helps prepare for shortages in rainfall beforehand. That helps give a better sense of where to distribute food aid — rather than scrambling after the fact.

The results were notable: In 2003, Ethiopia had yet another severe drought that left more than 13 million people in need of food aid — but a major famine was avoided.

Droughts are obviously still a big and costly problem around the world — and there's some evidence they've become more frequent in Europe and West Africa in recent decades. But droughts seem to have become significantly less deadly in some places (with some notable exceptions like war-torn Somalia in 2010-2012). It's a striking illustration of how adaptation can help reduce the impact of natural disasters.

For more on this subject, see this excellent post by Ed Carr on why drought does not have to equal famine.

Can we adapt to heat waves, too? 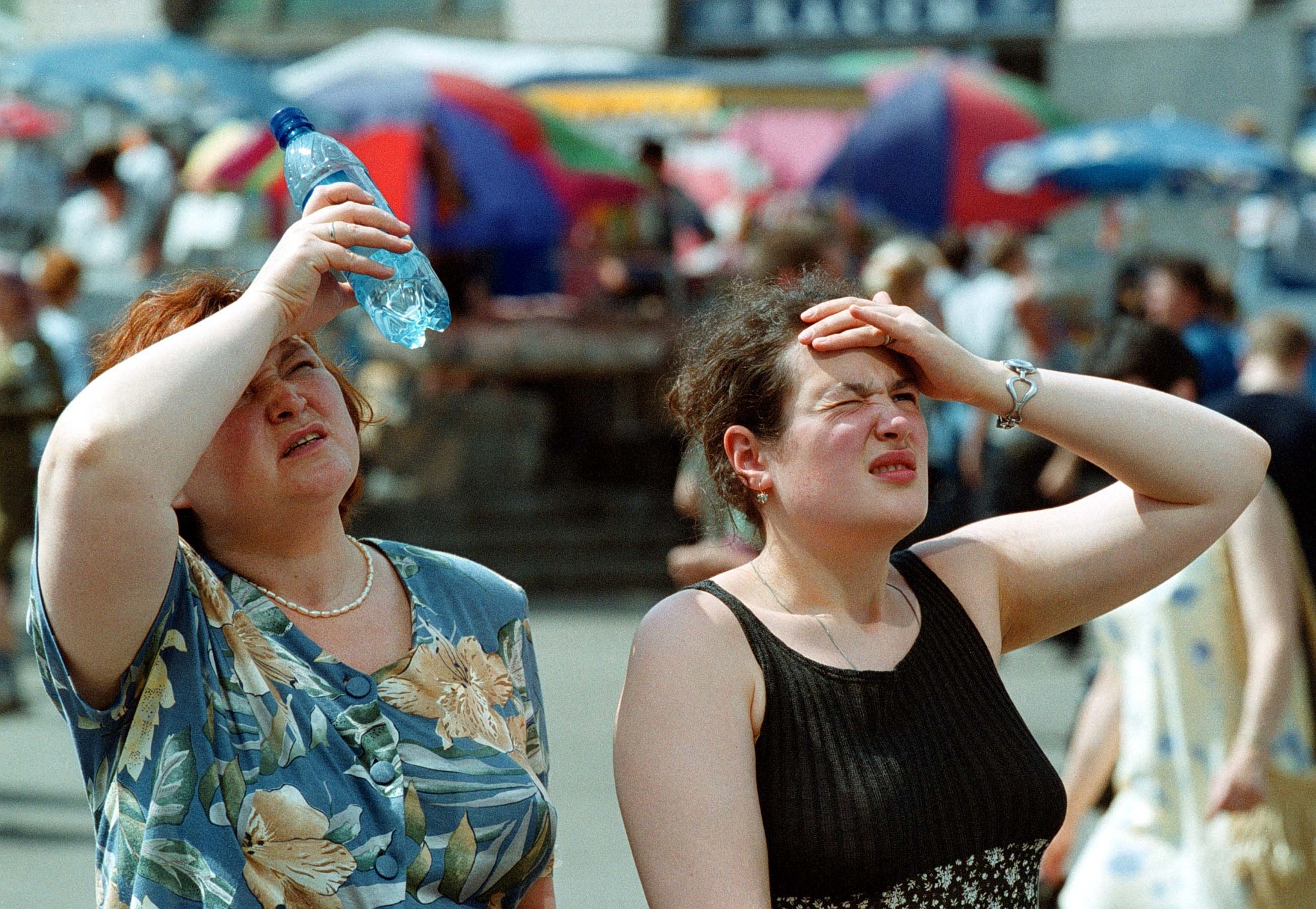 Two women wipe their brows July 19, 2001 in Moscow, Russia as the capital city continues to experience an unusual heat wave, with temperatures exceeding 30 degrees Celsius over the past weeks. Laski Diffusion/Getty Images

Here too, though, efforts are already underway to adapt. In Europe, for instance, researchers have noted that many of the deaths in the 2003 heat wave occurred among the elderly with weak social networks and poor health care. (The heat wave followed right on the heels of a nasty flu outbreak.) Better public-health infrastructure and monitoring might help here.

Likewise, scientists have observed that the urban heat island effect tends to exacerbate heat waves. Because of all the buildings and cars and black pavement, cities tend to be even hotter than their surroundings. But there are ways to mitigate that. One study found, for instance, that introducing more green spaces into a city could reduce the need for medical assistance during scorching heat waves by 50 percent.

If natural disasters continue to become more destructive — either due to global warming or changes in population (or both) — these sorts of adaptive measures will become increasingly vital.

* Update: On Twitter, Jeremy Konyndyk of the U.S. Office of Foreign Disaster Assistance offered a few important caveats to the WMO's numbers. For one, he noted, it's often more difficult to attribute deaths from drought the way we often can with other natural disasters. "Rather," he wrote, "drought aggravates other vulnerabilities, contributes to increased death toll — but not as sole factor." So the WMO may be understating the toll from drought. He offers a few examples, such as Somalia in 1992-93 or the Horn droughts in 2008 and 2011.