More states have workplace protections for smokers than LGBT workers

Share All sharing options for: More states have workplace protections for smokers than LGBT workers

The differing protections speak to how slowly lawmakers are adapting to changes in public opinion and state laws. More Americans support LGBT rights and marijuana legalization than ever, but in many states only users of the deadliest drug in the country have more legal protections.

Smoking workers are protected in 29 states 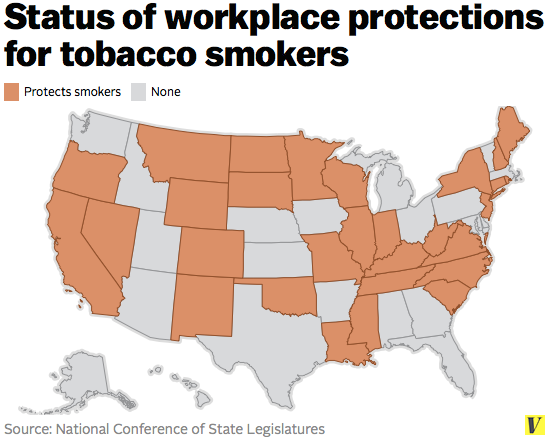 Twenty-nine states protect smokers from discrimination in the workplace, meaning workers can't be fired or refused employment for smoking tobacco.

an employee who smokes costs an employer nearly $6,000 a year

These protections actually force employers to take on more expensive workers. A study from an Ohio State University researcher found an employee who smokes costs an employer an average of nearly $6,000 a year, due to the loss of productivity from smoke breaks and health-care expenses that exceed insurance costs for nonsmokers.

LGBT workers are protected in 21 states 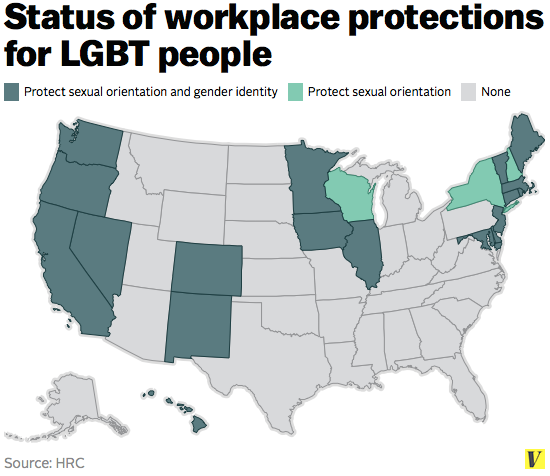 About 9 percent of openly gay, lesbian and bisexual people were fired or denied employment

The lack of protections can have serious repercussions for LGBT workers. About 9 percent of openly gay, lesbian and bisexual people were fired or denied employment based on their sexual orientation and 38 percent were harassed on the job because of their sexual orientation or gender identity over a five-year period, according to a 2011 study from the LGBT-focused Williams Institute at UCLA Law School.

Some LGBT advocates argue that existing laws, particularly the Civil Rights Act of 1964, could be used to protect LGBT employees. But until courts or Congress back the interpretation, it remains on shaky legal ground. So far, Congress has refused to act on a proposal that would create workplace protections for LGBT people — and some LGBT groups abandoned the proposal due to its wide exemptions for religious employers. 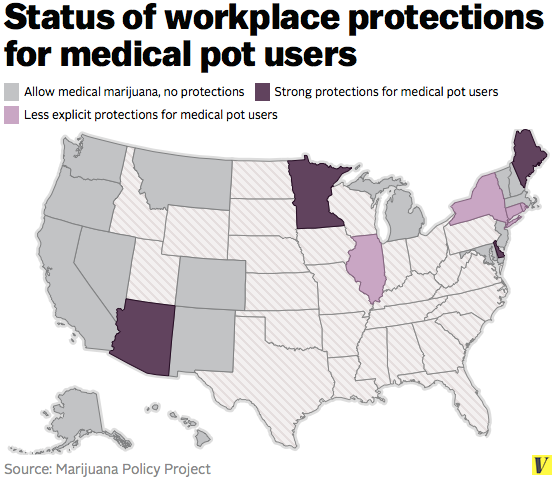 Neither of the states that allow recreational marijuana (Colorado and Washington) apparently have workplace protections for pot users, even if they only use the drug outside of work. (An appeals court ruled that Colorado's law protecting legal activities outside the workplace doesn't apply, since the state's marijuana laws conflict with federal laws.)

The lack of protections for marijuana users has led to some high-profile employers cracking down on the drug. Wal-Mart, for one, fired a worker with cancer for his use of medical marijuana, even though the employee says he never used it on duty. The NFL also tests and suspends players for using marijuana, even if they live in states that allow the drug for recreational or medical purposes.

For now, that's not the case. Instead, people who use tobacco have more workplace protections than LGBT people and legal marijuana users.