Share All sharing options for: 3 reasons the teen summer job is vanishing

The idea of spending a summer bagging groceries or taking movie tickets as a rite of passage may be a fiction at this point. July is the peak of the summer job season, but that peak has been getting smaller and smaller — and the decline predates the recession.

The share of teens who are working in any given July has been on the decline since 1990. And while recessions may hasten this loss of jobs, it never seems to rebound afterward. 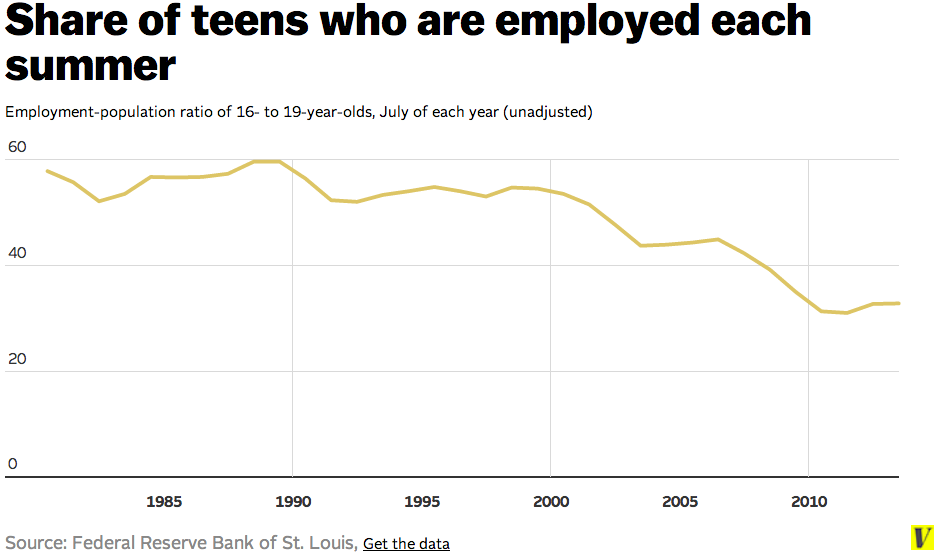 The teen labor force participation rate shows a similar trend. What is behind the slow death of the teen summer job? Here are three possibilities

1) They're being shoved to the back of the line.

Plain and simple, it's a tough job market out there for a lot of people, and teens face some of the worst of it. 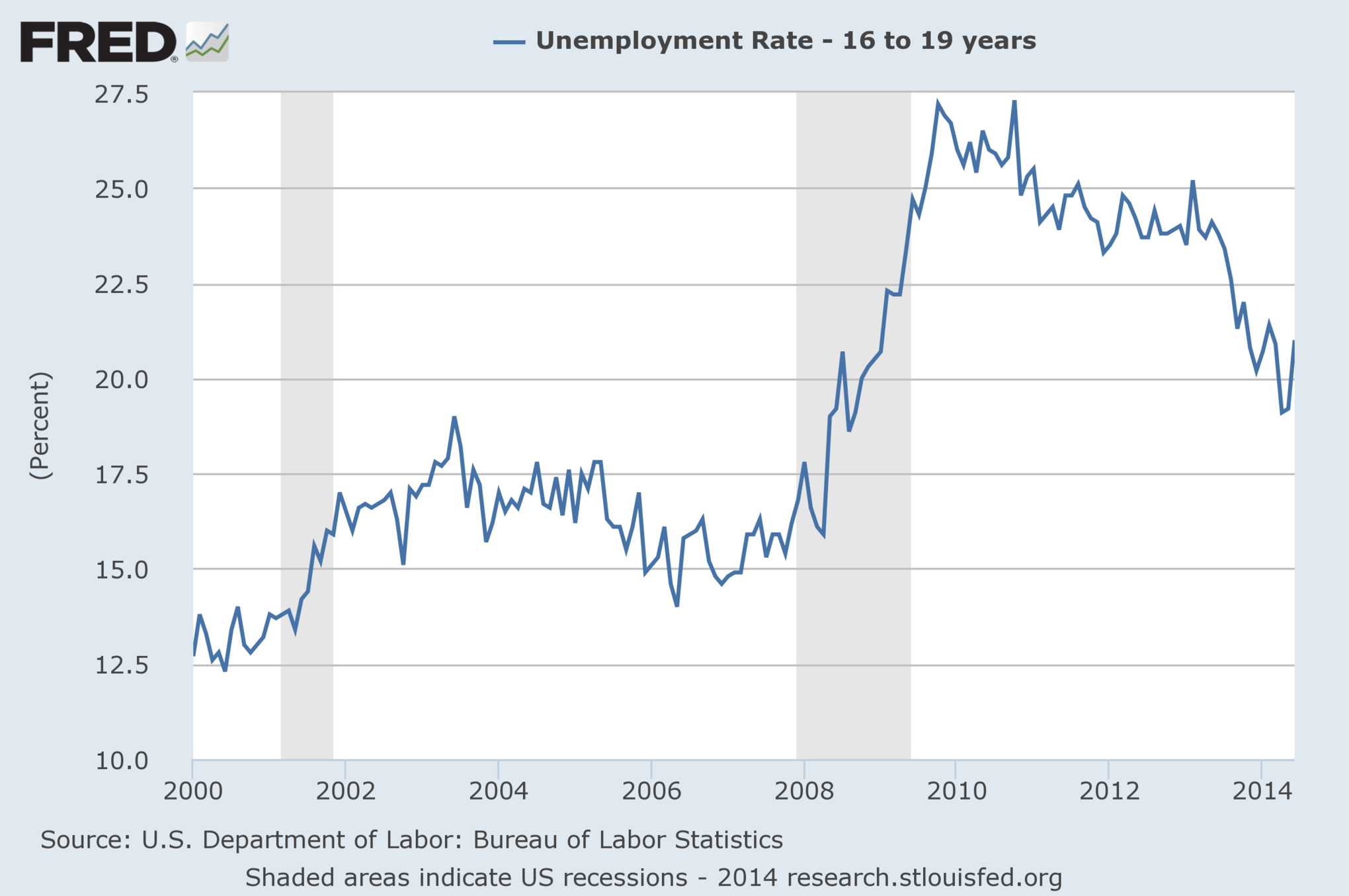 The teen labor force participation rate may have fallen, but there is still clearly an elevated share of teens looking for work who can't find it. As recently as 2000, the teen unemployment rate was as low as 12.3 percent. Today, it's 21 percent (seasonally adjusted). That rate only counts people looking for work who can't find it, meaning there is still plenty of labor market healing to go for teen workers of all stripes.

Many teens age 16 to 19 are by definition entry-level workers, which is a big reason why they can't get jobs now, says Ishwar Khatiwada, associate director of the Center for Labor Market Studies at Northeastern University who recently studied teen labor trends for the Brookings Institution. And that unemployment burden is borne particularly heavily for teens from low-income families. 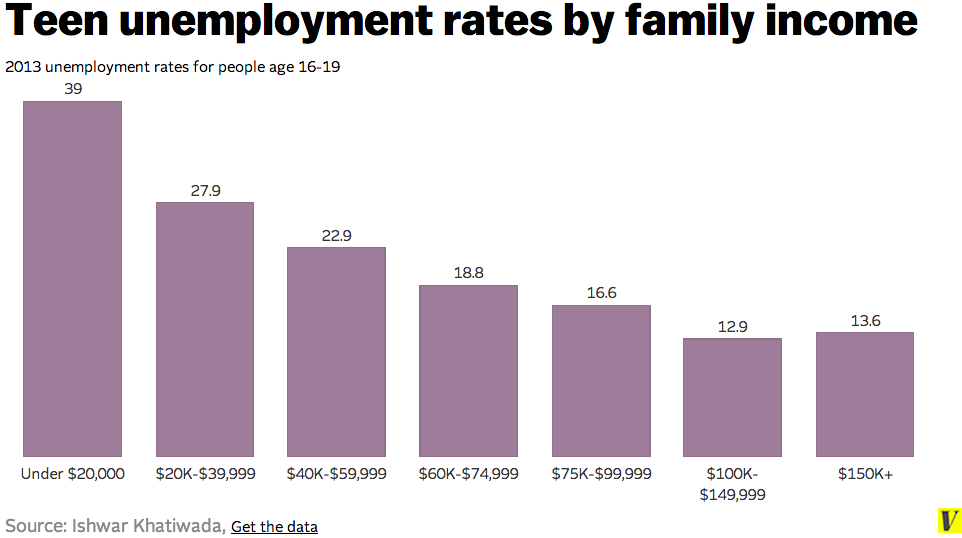 "The job market is very, very weak for teens," he says. And given the choice, he adds, "[Employers] will not pick teens. They will pick some older adults — 20, 24 years old." And he points out that that unemployment rate may not capture discouraged workers. Poorer teen workers are also employed in smaller shares than ones from richer families.

This idea that teens are undesirable workers is similar to how people often speak about the long-term unemployed — even when a teen might otherwise look like an attractive worker, employers will shuffle them to the back of the pack. For example, teens have been crowded out of fast food work. Today, teens make up only 16 percent of fast food workers, compared to 25 percent 10 years ago, as NerdWallet has reported — which may suggest that older workers are taking jobs teens formerly snapped up.

All of this means it may take a massive improvement in the labor market for that teen unemployment rate to go down.

Many teens may well be struggling in the workforce, but there's also evidence teenagers also just don't want to work as much as they used to, as MarketWatch pointed out in a recent article. The Bureau of Labor Statistics found this trend in a 2010 report, as did outplacement firm Challenger, Grey, and Christmas in a recent report. 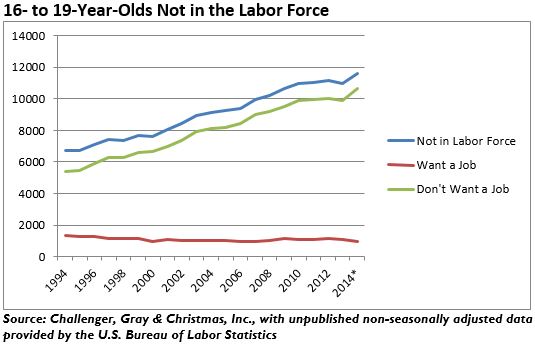 That upward trend in teens not wanting a job clearly had nothing to do with business cycles. While the teen unemployment rate remains elevated, it would be much higher if there weren't this growing trend away from teen work.

A couple of things could be at work here. One is that there are a bunch of teens out there who simply don't want jobs because they don't want jobs. But it's also possible that teens have looked around at their choices and decided college is a better path to long-term prosperity. Kids may be less interested in making money right now and more interested in what will look good on college applications. Which may mean there's another factor involved:

The number of teens enrolled in summer classes has been on the rise while that share of teens saying they want jobs has fallen, as the Bureau of Labor Statistics found in its 2010 report. 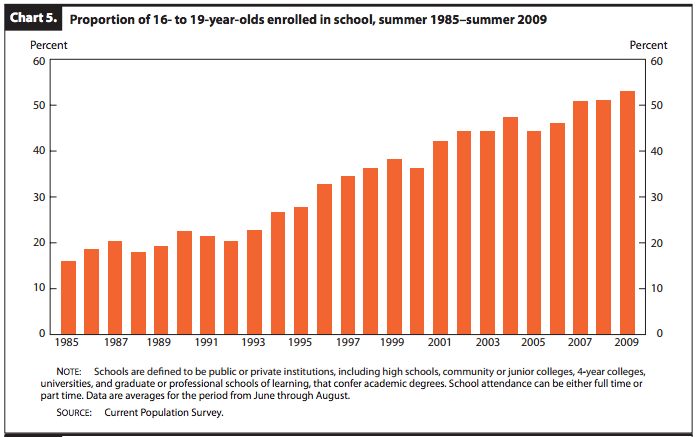 But the very act of getting into college — or even graduating form high school — may also be yanking teens out of work. The BLS writes that the share of students enrolled in summer school has been steadily on the rise. That in part is due to higher and higher high school graduation requirements, the report notes, not to mention students doing activities like summer "pre-college" programs to boost their chances of getting accepted.

In other words, there are a bunch of teens out there who would like to work but have prioritized other things over working.

That points to an irony in educating students better. As schools get more rigorous to prepare student for college and the workforce, and as students rack up volunteer and summer learning experiences to pad their college applications they are missing out on summer earnings and work experience. It is well documented that earnings and work experience early on lead to higher employment and higher wages later on in life.

That's not to say high schools should dial back their standards. But there are tradeoffs in how teens spend their time, and we've increasingly decided other things, like education, are more valuable for a teen's future than actual work experience."