Share All sharing options for: The real reason only rich people can afford to live in Silicon Valley

As Badger points out, this has created something of a vicious cycle. Opportunities are disproportionately being created in high-cost cities, boosting the incomes of the already affluent people who live there. That pushes rents higher, making it even harder for less skilled workers to live in America's most dynamic cities, pushing many of them to leave.

Badger blames rising demand for the high cost of living in these cities. But the real culprit is strict regulations that make it almost impossible to expand the housing stock in most parts of these cities.

Since 1990, the San Francisco Bay Area has grown more slowly than the nation as a whole

You can see this if you compare San Francisco today to Detroit a century ago. San Francisco is in the midst of a boom driven by information technology, just as Detroit was in the midst of an automobile-driven boom in the early 20th Century. Yet these booms have had dramatically different effects on the cities where they occurred.

In 1900, a few years before Henry Ford founded his auto company, the Detroit metropolitan area had around half a million people. By 1920, the population had almost tripled to 1.4 million, and it grew to 2.5 million people by 1940. Thanks to the booming auto industry, Detroit grew a lot faster than the nation as a whole. Those extra 2 million people weren't just workers on Henry Ford's assembly lines — they included barbers, schoolteachers, doctors, janitors, waitresses, and others providing services to the growing population of middle-class auto workers.

Since 1990, the San Francisco Bay Area has been experiencing a similar economic boom. Google, Facebook, and hundreds of other new technology companies are creating thousands of new jobs. Increasingly affluent engineers want haircuts, restaurant meals, remodeled kitchens, medical care, schools for their children, and so forth, just as auto workers did a century ago. Ordinarily, you'd expect workers across the income distribution would flock to the Bay Area to provide these kinds of services. The population of the Bay Area should be swelling.

But that mostly hasn't happened. Since 1990, the San Francisco Bay Area has grown more slowly than the nation as a whole. Strict housing regulations make it difficult to expand the housing stock. So rather than creating a tide that lifts all boats, Silicon Valley's millions have pushed housing prices up and non-wealthy San Franciscans out. Over the last two decades, a lot of them have left the area for fast-growing places like Phoenix and Las Vegas. The job opportunities there aren't as good, but you can afford to buy a house on a middle-class salary. 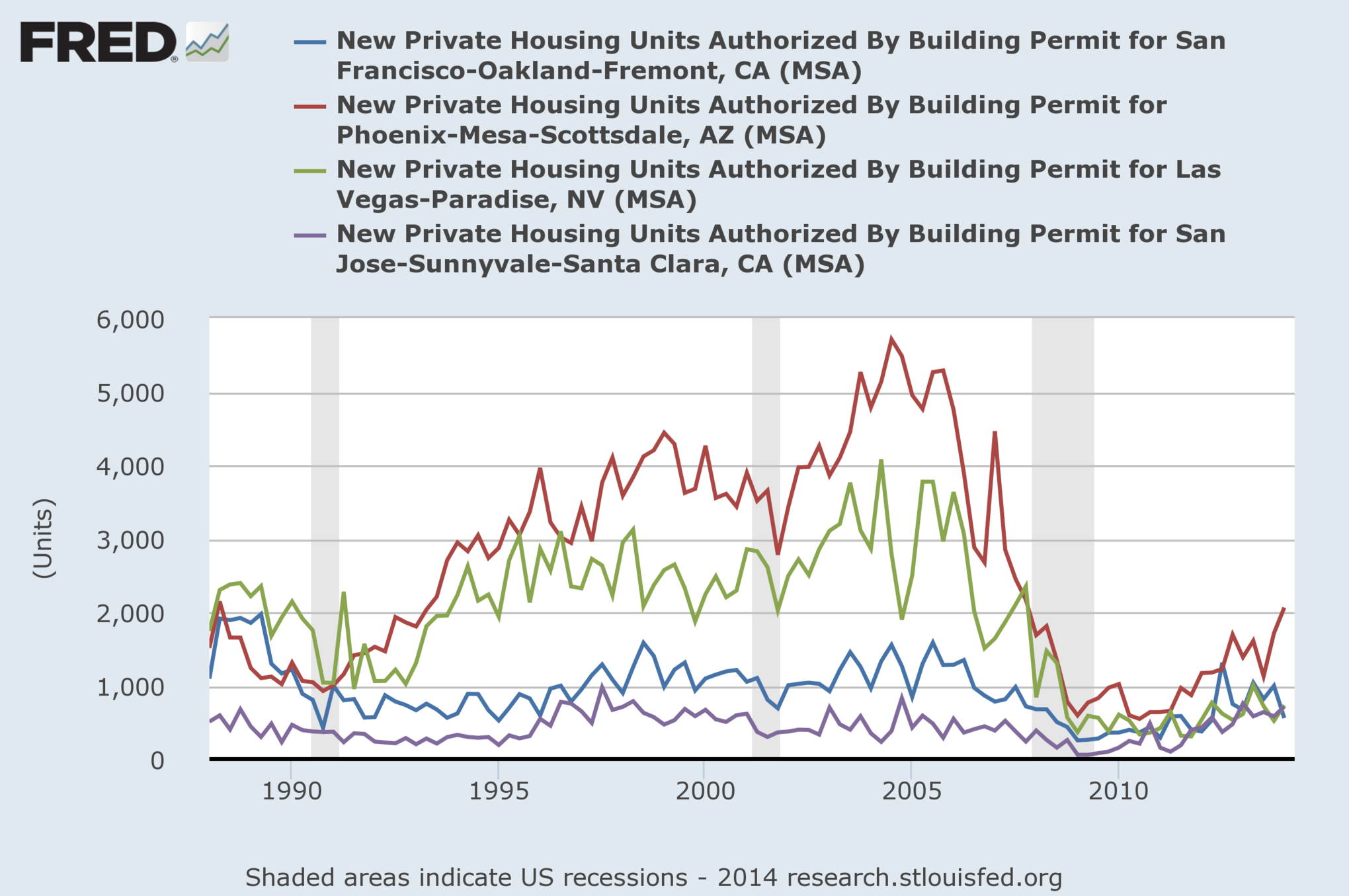 This graph shows a big part of the reason. The blue line is San Francisco and Oakland, purple is Silicon Valley. The green and red lines are Las Vegas and Phoenix.

In 1990, the San Francisco Bay Area was bigger than the Phoenix and Las Vegas metropolitan areas. Yet the latter allowed dramatically more construction during the 1990s and 2000s.  Little wonder that the Bay Area has seen slow population growth and rising rents.

It doesn't have to be this way. The Bay Area has plenty of room for more housing. San Francisco is less than half as dense of Brooklyn. Surrounding communities are a lot less dense than that. If housing regulations were relaxed, developers would make room for millions of new residents, creating thousands of construction jobs in the process. That would alleviate the severe housing shortage currently plaguing the city. And it would create opportunities for millions of non-wealthy people to live near the opportunities and amenities of America's high-tech capital.

And the same point applies to Boston, Washington DC, Los Angeles, and New York itself. We have the technology to build a lot more housing in all of these cities. That would make them more affordable to residents who are not wealthy. Instead, overly strict regulations have created a severe housing shortage, hampering the growth of some of America's most productive industries.