Jose Antonio Vargas is almost certainly the most famous unauthorized immigrant in America. But on July 15th, he was detained at the airport on his way out of Texas. Vargas was taken to the McAllen Border Patrol Station, according to Lara Drasin of Define American, and questioned by Border Patrol agents. He was released later that day.

Here's why Vargas' detention was a big deal: he is, by his own admission, probably the most visible unauthorized immigrant in the country. He's an established journalist with a Pulitzer Prize under his belt. And he chose to "come out" in the most public fashion imaginable: an essay in the New York Times. Just a few weeks ago, CNN broadcast his autobiographical documentary, Documented, on a Sunday night in prime time.

Vargas knew that, because he's famous, he was less likely to get ICE officers knocking on his door. "I've been the most privileged undocumented immigrant in the country," he wrote in Politico Magazine when he was in South Texas. "The visibility, frankly, has protected me." 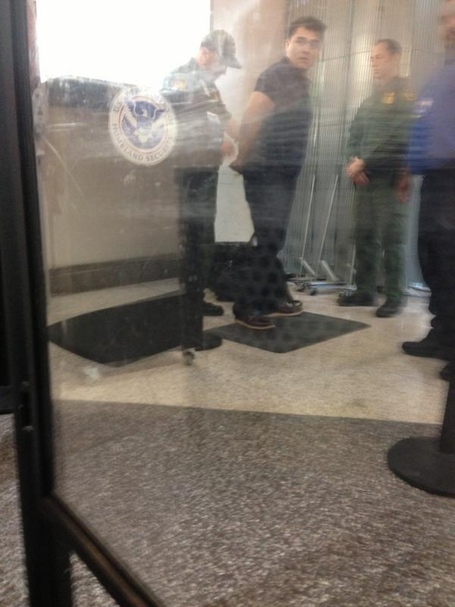 The government probably won't deport him

It's not surprising that Vargas got released by Border Patrol within a day. And while it's possible the government could still try to deport him, it's extremely unlikely.

The government has "prosecutorial discretion" to determine what to do with unauthorized immigrants. That means it can decide whether or not to put Vargas into deportation proceedings in immigration court.

vargas doesn't fit any of the obama administration's enforcement priorities

The Obama administration has said, repeatedly, that its focus is on deporting unauthorized immigrants who fit its administration "priorities": convicted criminals, "recent border crossers," and people who have been deported and returned to the US. 98 percent of all people deported last year fit into one of those priorities. Vargas doesn't meet any of those criteria.

In fact, two years ago, Vargas all but tried to turn himself in to immigration officials — and they didn't come get him. As he wrote in an essay for Time, in 2012 Vargas called Immigration and Customs Enforcement, and asked what the government wanted to do with him. ICE said, "no comment." They didn't come to his door or ask him to bring himself in to be deported.

If the government does decide it wants to deport Vargas now, even though it didn't choose to do so before, it's going to have to give him a hearing in immigration court. But immigration courts are massively overloaded, and hearings take months or years.

And in order to deal with the influx of children and families from Latin America into the United States, the government has announced that immigration judges are going to have to make room for hearings for children and families who have just entered the country — and push back hearings for everyone else. So the wait in a court in South Texas for someone like Vargas would easily be two years or more.

Of course, the government could choose to attempt to deport Vargas. But it would go against everything the Obama administration says it's doing to unauthorized immigrants, and it would take a very long time.

Why Vargas got apprehended in South Texas

Vargas traveled to McAllen, Texas, to witness how Americans are responding to the child migrant crisis. Only after he arrived, as he wrote in Politico, did he realize it would be difficult for him to get back.

The problem is that the security procedures Vargas had to go through are much stricter in South Texas than they are in most of America. Here's what he was up against:

You might not get through airport security, where Customs and Border Protection (CBP) also checks for IDs, and you will definitely not get through the immigration checkpoints set up within 45 miles of this border town. At these checkpoints, you will be asked for documentation.

Vargas has valid ID — it's just not American. His Filipino passport has been able to get him onto planes so far — but he was always just a few seconds of inspection away from a TSA agent noticing he didn't have a valid visa on his passport, and sending him over to CBP.

The only IDs I have for security: Philippine passport and my pocketbook US Constitution @DefineAmerican & @MAC_UTPA pic.twitter.com/IFH0Vb4oX7

That's what happened on July 15th. That morning, he tweeted that he was about to go through airport security. A few minutes later, Lara Drasin of Define American (Vargas' organization) emailed reporters saying that Vargas had been detained trying to leave Texas, and was headed to the McAllen Border Patrol Station.

It might have been worse if Vargas had traveled by road within 45 miles of McAllen, where he would have run into a roadside checkpoint.

At border checkpoints, officers routinely stop all cars and ask if the occupants are citizens. The people in the car don't have to answer that question, but, according to a Border Patrol spokesperson, "they will not be allowed to proceed until the inspecting agent is satisfied that the occupants of vehicles traveling through the checkpoint are legally present in the U.S."

"if the person were found to be not here legally, the vehicle would be seized and the driver would be arrested"

A public affairs officer at the Border Patrol station for the Rio Grande Valley sector — the sector Vargas is currently in — confirmed to Vox, in a hypothetical, that an immigrant with a foreign passport but no proof of legal status wouldn't be able to make it through a Border Patrol checkpoint.

These checkpoints aren't specific to South Texas. They're located along both the southwestern and northern borders of the US, in what the ACLU calls the "Constitution-Free Zone": the 100 miles within the United States border where Border Patrol can legally do things that, anywhere else in the country, would be considered violations of the Fourth Amendment. That includes the questioning of all drivers at interior checkpoints.

The ACLU estimates that two-thirds of Americans live within the "Constitution-Free Zone." That includes a large portion of the unauthorized population of the United States as well — like Tania Chavez, a youth leader who Vargas writes about in his essay:

Even though she graduated from University of Texas-Pan American and has two master's degrees, she is trapped, literally and figuratively, her life in limbo, her dreams on hold. She's 28. Like many undocumented Mexicans who live near the Texas-Mexico border, she can't return from Mexico if she goes, and she can't travel outside of a 45-mile radius in her home in Texas.