LeBron James startled the sports world today by announcing in Sports Illustrated that he'll be taking his talents to Cleveland, Ohio rather than resigning with the Miami Heat.

When James initially opted-out of the final year of his contract with the Heat, it was generally interpreted as a power play to restructure the team's contracts and attract some fresh talent. But as days went by without Miami succeeding in securing any firm commitments to add major new help, rumors grew that James was considering a return to his original team. Now it's happening. Here are five reasons why.

1) The Cavaliers are about as good as the Heat

NBA player evaluation is a controversial subject, but different metrics reach a pretty broad consensus that LeBron James is personally worth about 20 wins in the NBA (here's Nate Silver's preferred metric, here's one I like developed by economist Dave Berri) which is slightly larger than the gap in wins between Cleveland and Miami last season.

In other words, the Heat were a lot better than the Cavs solely because the Heat had LeBron James and the Cavs didn't. Add LeBron to the Cleveland roster, and the team is just as good. Except Cleveland, unlike Miami, has some young talent on the roster. 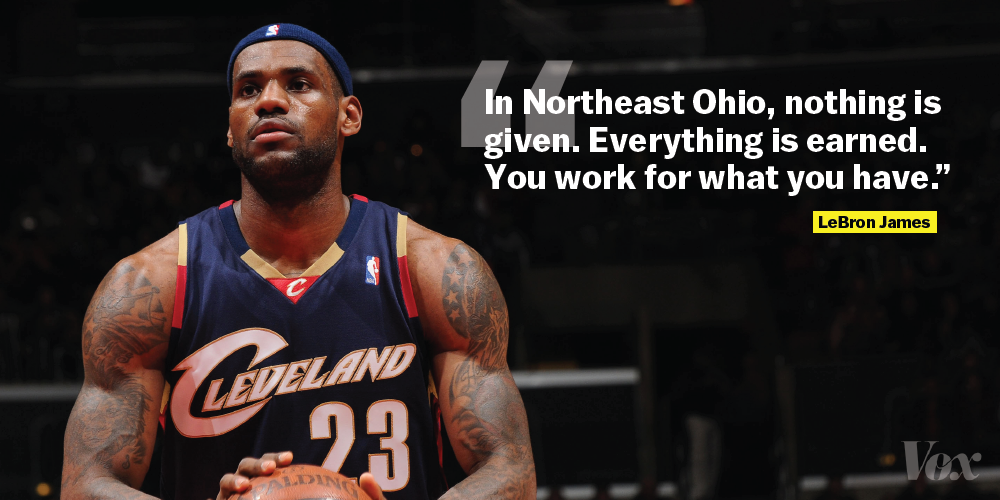 He grew up in Akron, not far from Cleveland. And he went directly from playing high school ball in Ohio to playing professionally for the Cavaliers. His wife is also from Ohio. He has no real personal or family connections in South Florida or anywhere else other than the Cleveland area.

3) The Eastern Conference is really bad

One major factor for James in deciding what to do this offseason is maximizing his chances of winning future championships. This decision is complicated by the fact that currently the teams located in the Western Conference are much much stronger than the teams located in the Eastern Conference. Last season, six of the top eight teams by point differential were in the West — including three of the top three.

That means that to maximize his odds of playing for the very best team in the league, LeBron would likely have to go West. But to maximize his odds of reaching the NBA Finals again, it makes the most sense to stay in the East. Speaking strictly in terms of probabilities, that makes the Eastern Conference attractive. And since the Eastern Conference is lacking in high quality teams, Cleveland looks about as good as any other destination. Stacked up against some potential Western suitors, the roster is unimpressive. But as we've seen, it's just fine compared to Miami's.

4) Nobody likes the Atlanta Hawks

Based purely on logical considerations, the best destination might well have been the Atlanta Hawks. Their record last season was slightly better than Clevelands, and their team also suffered a number of serious injuries that are unlikely to recur. They had the cap space to sign LeBron, and also play in a bigger media market that's still in the Eastern Conference.

And yet the Atlanta option never appears to have garnered substantial consideration from James or from any other high-profile free agents in recent years. It's not entirely clear why this is, but the city of Atlanta has gained a reputation for possessing indifferent sports fans who don't like to turn out for even reasonably successful teams.

5) If LeBron wins in Cleveland he'll be a hero

This is probably the most important consideration. When James decamped for Miami, he had aspirations of building a historic dynasty that would rival the Chicago Bulls teams that Michael Jordan led in the 90s or the Boston Celtics teams that dominated the NBA in the 1960s. It's clear by this offseason that it isn't going to happen. The James-led Heat mini-dynasty had an impressive four-year run, but not a historic one. Even if he won another ring there over the next three years, it wouldn't substantially change his legacy.

By contrast, winning even a single championship in Cleveland would be a huge deal. The Cavaliers have never won an NBA championship. The Cleveland Indians last won the World Series in 1948. The Cleveland Browns won a championship in 1964, two years before the inauguration of the Super Bowl. Any star player who leads any of these three teams to a championship, will be a sports hero to several generations of people in Northern Ohio. For a native son of the region to do it, would be especially special.

James has reached a point in his life and career where doing things that are truly special is what matters most to him and that means trying to win in Cleveland.