Congress needs to scrounge up $16 billion before August or the United States will start running out of money for roads. Worse, no one can agree where that money should come from.

Well, with one odd exception. Both the House and Senate are in favor of a provision that would divert $1 billion from a fund set aside to clean up "leaking underground storage tanks" and use it for roads.

But there haven't been many news stories that explain what's actually going on with these bills. Where did this bizarre LUST fund come from? Why is there $1 billion just sitting around?  Does this mean there might be leaking storage tanks that no one's cleaning up? So... let's explain.

The origins of the Leaking Underground Storage Tank fund 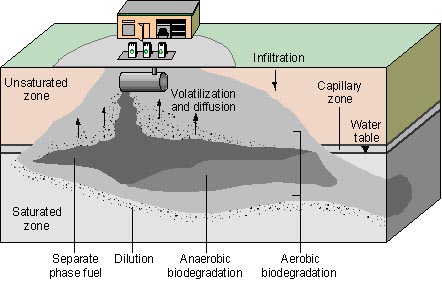 Back in the 1980s, policymakers realized that many of the nation's 2.2 million underground storage tanks — including petroleum storage tanks at gas stations — were leaking and threatened to contaminate groundwater supplies.

So, starting in 1984, Congress passed a series of laws to tighten standards for these tanks and clean up leaks, all paid for by a 0.1-cent-per-gallon tax on motor fuels. That money went into the Leaking Underground Storage Tank Trust Fund, or "LUST fund." (And kudos to whatever staffer found a way to sneak in that acronym.)

Over the years, the EPA and states used this money to enforce and fund cleanup operations. By 2009, nearly 80 percent of the nation's 488,000 leaking tank sites had been cleaned up, with a backlog of about 100,000 remaining. Later on, Congress also required the EPA to use some of that money for leak prevention, as well.

Why Congress is now raiding the fund

But even though cleanup efforts have slowed in recent years, the tax on motor fuels is still in effect, and the Leaking Underground Storage Tank fund keeps accumulating a tidy surplus: about $1.4 billion as of June 30, 2014.

That surplus is expected to keep growing in the years ahead: the fund now earns about $300 million a year from fees and interests and only pays out roughly $100 million per year.

So Congress has decided to take money from the fund for other purposes. And, since the fund is financed by a tax on motor fuels, they reasoned, it makes sense to use that money for transportation.

In 2012, lawmakers transferred about $2.4 billion from the fund to help pay for its two-year transportation bill. (At the time, the LUST Fund had a $3.7 billion surplus.)

Two years later, the Highway Trust Fund — which is used to finance federal spending on roads, bridges, highways, and transit — is facing yet another shortfall. So, both the House and Senate have put forward bills that would take another $1 billion from the LUST Fund and raise $9 billion elsewhere to keep road spending going until next May.

Are there problems with taking money from the fund?

It seems to be a popular option among lawmakers. Right now, the LUST Fund keeps bringing in more money than lawmakers spend on cleanup and leak prevention. So, they argue, there's no real harm in raiding the fund.

That said, a handful of outside groups have countered that Congress should leave the fund alone — and, if anything, spend more on cleanup and enforcing standards to prevent future leaks.

Back in 2012, the Petroleum Marketers Association of America made this argument when Congress first began taking money from the fund: "The transfer of three billion dollars from the fund would cripple important programs and ultimately harm marketers who have paid the tax and built the fund over the past 25 years," the group said. "Equally significant and inequitable, states are likely to increase tank fees to account for the federal LUST Fund shortfall; therefore, imposing a second/double tax on petroleum marketers."

At the time, a few senators — including Sen. Tom Carper (D-DE) and Ben Cardin (D-MD) — tried to find alternative ways to fund highways rather than raiding the LUST Fund. But those efforts never succeeded.

Over the years, some environmentalists have likewise argued that current underground tank cleanup efforts are underfunded and still inadequate. One 2007 report by the GAO found that it would take nearly $12 billion to fully address leaks from the nation's most severe leakage sites. Likewise, in 2005, the Sierra Club argued that the fund was too hobbled by bureaucracy and disbursing money for cleanup efforts too slowly.

More recently, some states still appear to have a sizable backlog of petroleum leaks. In Michigan, for instance, progress on cleaning up contamination from nearly 9,000 leaking underground tanks has slowed in recent years. (One oft-cited explanation for that, however, is that the state legislature has been raiding a separate state cleanup fund to plug various budget holes.)

For more on these issues, this 2010 report from the Congressional Research Service is a helpful overview.