Share All sharing options for: Boehner is suing Obama so he doesn’t have to impeach him

Consider what happens if Speaker John Boehner wins his lawsuit against President Barack Obama: the court will order Obama to implement the Affordable Care Act's employer mandate without further delay. Which, given that Obama only delayed the mandate until 2015 and court cases can take a long time to wind their way through the legal system, might mean the court will order Obama to do something he has already done.

It's as if Pat Riley was suing LeBron James to force him to begin playing for the Cleveland Cavaliers sooner. 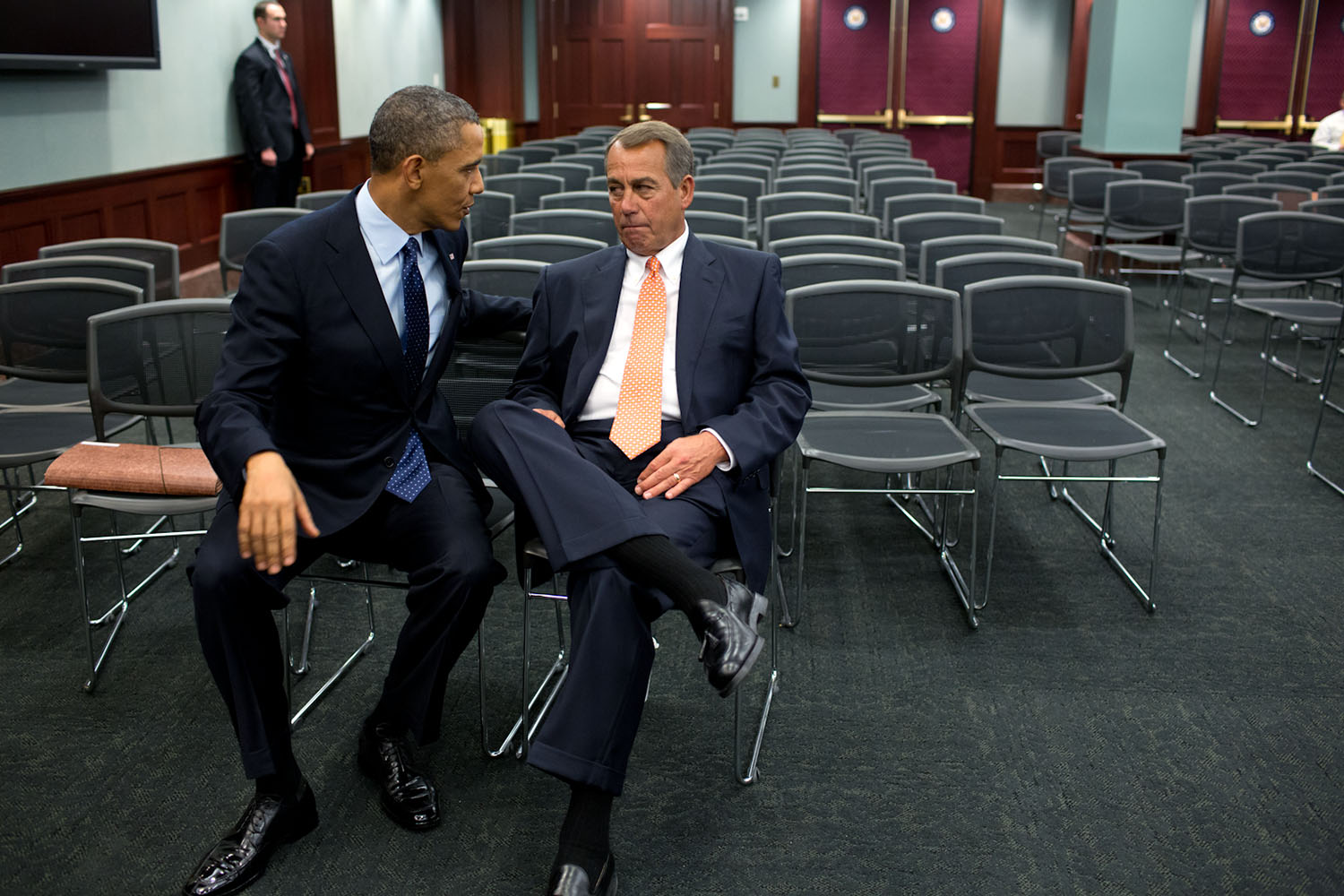 Boehner's argument is that this isn't about the mandate at all. It's about the Constitution. "In 2013, the president changed the health care law without a vote of Congress, effectively creating his own law by literally waiving the employer mandate and the penalties for failing to comply with it," he wrote. "That's not the way our system of government was designed to work. No president should have the power to make laws on his or her own."

Boehner's argument is that this isn't about the mandate at all. It's about the Constitution.

The point of the lawsuit, in other words, is to set precedent ensuring neither Obama nor any future president can choose to riff on the laws passed by Congress. The case is so narrowly tailored because that's what gives it the best chance of success.

Boehner's concern is confusing given that he was House Majority Leader in May 2006, when President George W. Bush chose to waive Medicare Part D's penalties for low-income and disabled seniors who signed up late. "Officials determined that collecting the fees from poor beneficiaries would cost more than the penalties themselves," reported McClatchy. The article goes on to suggest that the Bush administration's move was partially motivated to make sure Congress did not pass legislation permanently removing the late-enrollment penalties.

Which isn't to say Boehner isn't sincere — or even that he's wrong. People are much better at identifying executive overreach in presidents from the other party, and much angrier once they find it. But this lawsuit is optional for Boehner. It's a bit hypocritical. It's almost certainly going to fail. And if it succeeds and Republicans win in 2016, it might be a disaster for the next Republican president.

Boehner needs a good reason to take this on. 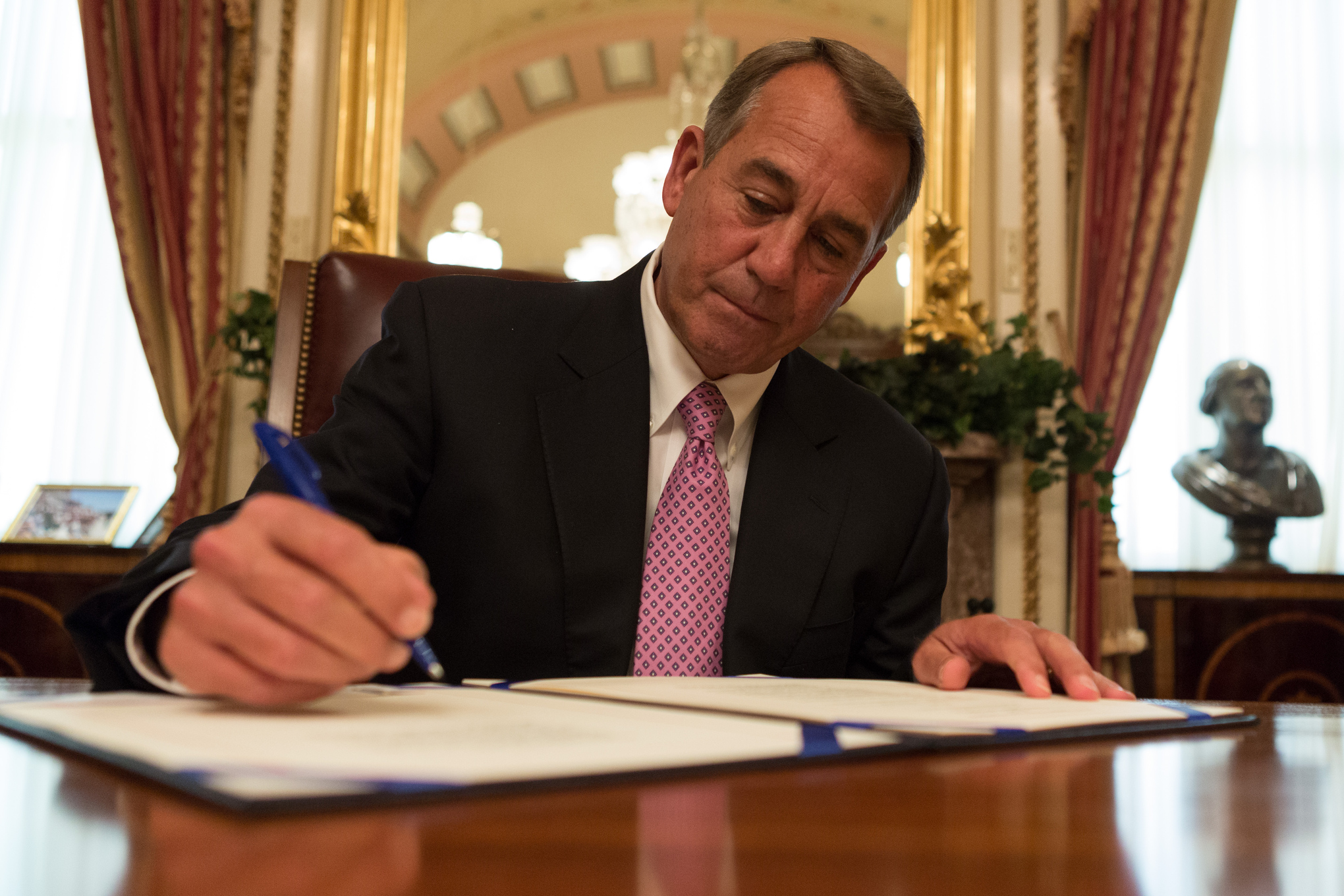 You do not want this man’s job. (Caleb Smith/Boehner’s office)

There's another possible reading of Boehner's lawsuit. Under this theory, Boehner's lawsuit isn't so much about reversing what Obama has done as it's about stopping what Republicans might do.

The Republican Party is growing angrier and more obsessed by Obama's executive actions every day. "Serious as the policy disagreements roiling Washington are, none is as important as the structural distortion threatening constitutional equilibrium," wrote George Will. "Institutional derangement driven by unchecked presidential aggrandizement did not begin with Barack Obama, but his offenses against the separation of powers have been egregious in quantity, and qualitatively different."

As a result, calls for impeachment are mounting. "The many impeachable offenses of Barack Obama can no longer be ignored," wrote Sarah Palin. "If after all this he's not impeachable, then no one is."

Palin isn't the Republican leader she once was. But Boehner knows that she's damn good at reading the party's conservative base. He's watched ideas like this move from ridiculous to inevitable in an instant (see Government Shutdown, 2013). He also watched what happened the last time Republicans tried to impeach a president who was more popular than they were: they lost the midterm election and Newt Gingrich had to resign as Speaker of the House.

The unusually involved process Boehner has chosen for this lawsuit permits it to act as a kind of mini-impeachment process — but one that doesn't end in a disastrous impeachment vote. Rather than simply suing Obama on his own Boehner is bringing the resolution before the House: there will be a committee process and then a floor process in which Republicans will be able to lay out their case against Obama's executive overreach, much like they would be able to during an impeachment process.

Assuming House Republicans ultimately back Boehner's lawsuit, it will begin a lengthy legal process as the case winds its way through the courts. House Republicans will be able to go back to their districts and tell their base that they're doing something radical and even unprecedented to bring Obama to heel. Meanwhile, Boehner can argue that attempting impeachment before the case finishes would be counterproductive: if Republicans raise impeachment as a remedy there's no way the courts will get involved. They'll just let Congress work it out.

Boehner is letting Republicans throw as many parties as they want in the House so he can make sure they don't drink and drive home.

Some conservatives suspect Boehner is trying to distract them. "Boehner's lawsuit is nothing more than political theater and a further Republican waste of taxpayer dollars," wrote Red State's Erick Erickson. "If the Republican leaders in the House are too chicken to use their constitutional powers to rein in the President, they should just call it a day and go home." Andrew McCarthy, author of "Faithless Execution: Building the Political Case for Obama's Impeachment", calls Boehner's lawsuit "a theatrical exercise in futility."

But that's the thing about theatre: it's incredibly distracting. Boehner's particular legislative genius is his ability to keep House conservatives from detonating the Republican Party while maintaining just enough conservative credibility to retain his speakership. This might be his masterstroke.