On Thursday, Florida circuit judge Terry Lewis ruled that parts of the state's Congressional district map violated the state constitution and must be redrawn, because they were gerrymandered to help Republicans.

A "group of Republican political consultants did in fact conspire to manipulate and influence the redistricting process," Judge Lewis wrote. "They made a mockery of the Legislature's proclaimed transparent and open process of redistricting," "went to great lengths to conceal from the public their plan," and "managed to taint the redistricting process and the resulting map with improper partisan intent," he added.

The background is that in 2010, Florida's voters approved a state constitutional amendment banning any redistricting intended "to favor or disfavor an incumbent or political party." The measure passed with 62 percent support, but the process was still left to the state legislature, then (and now) controlled by Republicans.

When the GOP redistricted the following year, the maps they came up with seemed to many to be slanted in their favor. Indeed, in 2012 Republicans got 51 percent of the US House votes - but they ended up with 63 percent of the seats, 17 out of 27.  The League of Women Voters, several media organizations, and some voters saw partisan motivations at play, and filed suit to try and get the districts thrown out.

Though the plaintiffs sued over many districts, Judge Lewis ruled that Florida's 5th and 10th districts were improperly drawn. You can see what they look like in this map: 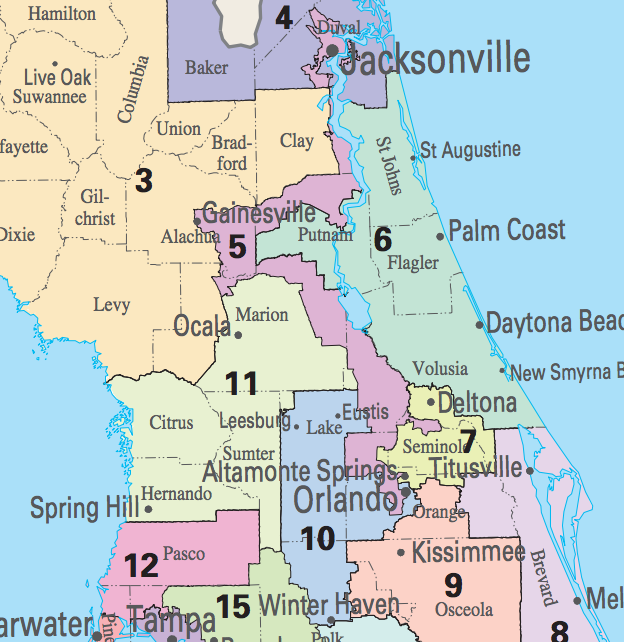 The 5th district, Judge Lewis wrote, is "visually not compact, bizarrely shaped, and does not follow traditional political boundaries as it winds from Jacksonville to Orlando." At one point, it "narrows to the width of Highway 17." Meanwhile, the 10th district has, on its east side, what the judge calls "an odd-shaped appendage which wraps under and around District 5." Judge Lewis ordered that both districts — and by extension, the districts they border — must be redrawn.

Florida's legislature is likely to appeal the ruling, and the case will likely reach the state's Supreme Court. It's not yet clear whether Florida will have to come up with new maps before this fall's elections — its primaries are scheduled for August 26.