The very Israeli brand of humor for coping with rocket attacks

Share All sharing options for: The very Israeli brand of humor for coping with rocket attacks

Israelis have been living for years under the threat of rockets fired indiscriminately by Palestinian and Lebanese militant groups, particularly from Gaza-based terrorist groups such as Hamas. As in any conflict, the people affected by it find ways to cope and to integrate the reality of conflict into their lives. For Israelis, this often takes the form of humor.

To give you a sense for what that coping looks like, here's a 2012 cartoon teasing Israelis in Tel Aviv for their typical response to rocket attack warning sirens. It's by Israeli artist Tomi Zandshtein, who has generously given permission for it to be reproduced here (Tomi typically writes in Hebrew but you can read English translations of his work): 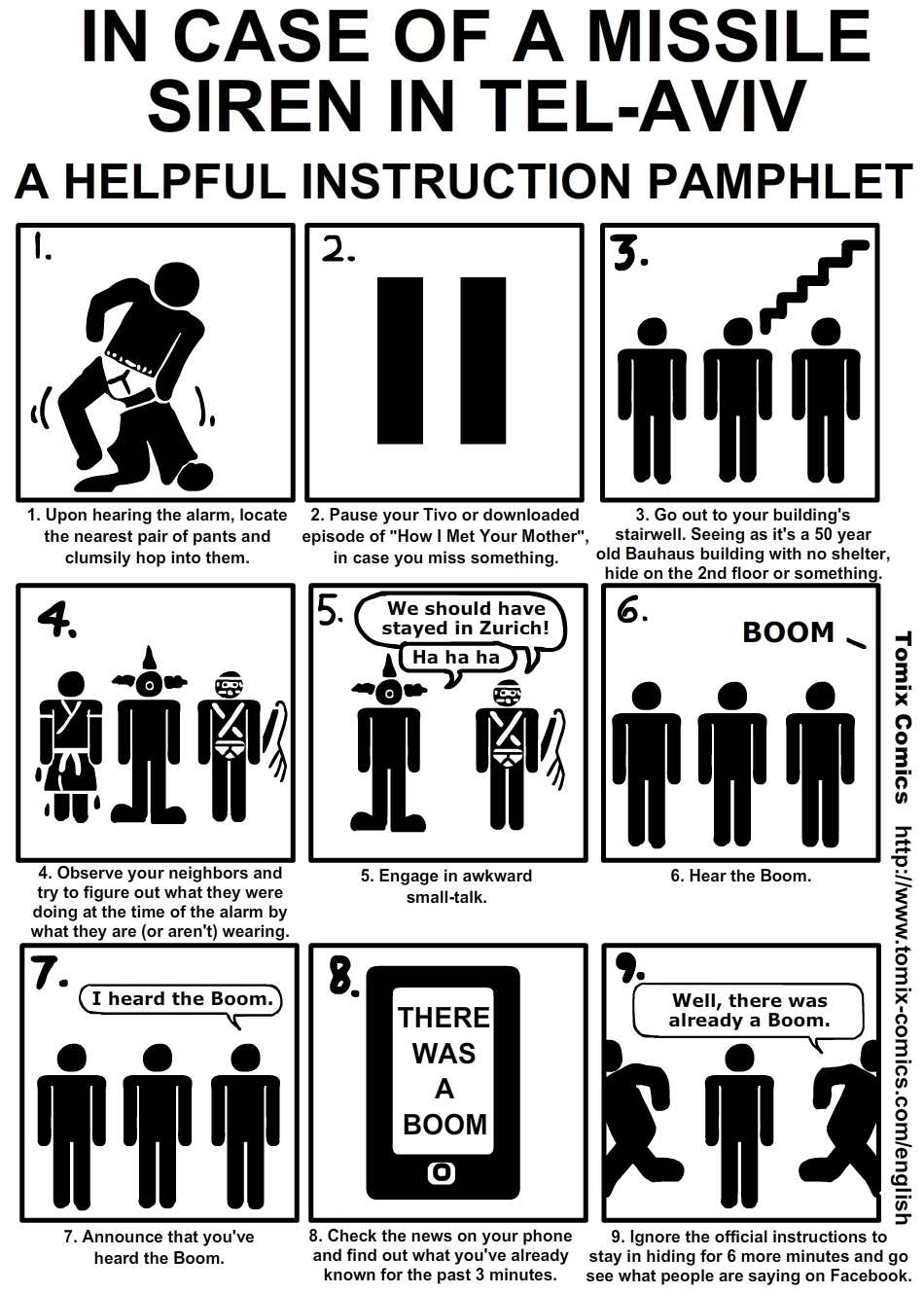 "Israelis, in general, tend to view these things with a mixture of nervousness and light heartedness," Zandshtein told me over email. "We get angry or scared by these things just as often as we laugh at them or act like they're no big deal. We'll run for cover (usually), but then we'll also go outside and look up at the sky looking for the little puff of cloud that marks the spot where the rocket was intercepted, then we'll take pictures of it and upload it on Facebook."

This tracks with what Israelis in Tel Aviv and other cosmopolitan coastal cities have told me about the experience of coping with rocket sirens. There's a small but popular sub-genre of Israeli rocket jokes. See, for example, this November 2012 video, "Shit Tel Avivians say during an attack" (turn on English subtitles by clicking CC in the bottom-right corner):

Zandshtein says he drew his cartoon in late 2012, when Hamas and other groups fired a number of rockets toward Tel Aviv in retaliation for Israeli air strikes in Gaza and rocket sirens sounded over normally peaceful Tel Aviv, as they have been again this week.

In southern Israel, near the Gaza border, rockets are far more common, the warning time much shorter, and their physical and psychological damage much deeper, with bomb shelters and evacuations and explosions a part of daily life.

"We don't have to deal with as many sirens here in Tel Aviv as the people who live closer to the Gaza strip who get fired at a lot more frequently and have a lot less time to get to the shelters," Zandshtein says. "Over here we have the privilege of looking at it as a strange, hopefully temporary experience."

"Although," he adds, "I have a friend who lives close to the Gaza strip, and she says that she has a massive collection of rocket jokes from her friends there." I have been told this as well by Israelis who live near Gaza, although everyone also seems to know someone who was injured or maimed by a rocket. Zandshtein says a friend lost his eye in an attack while visiting southern Israel. 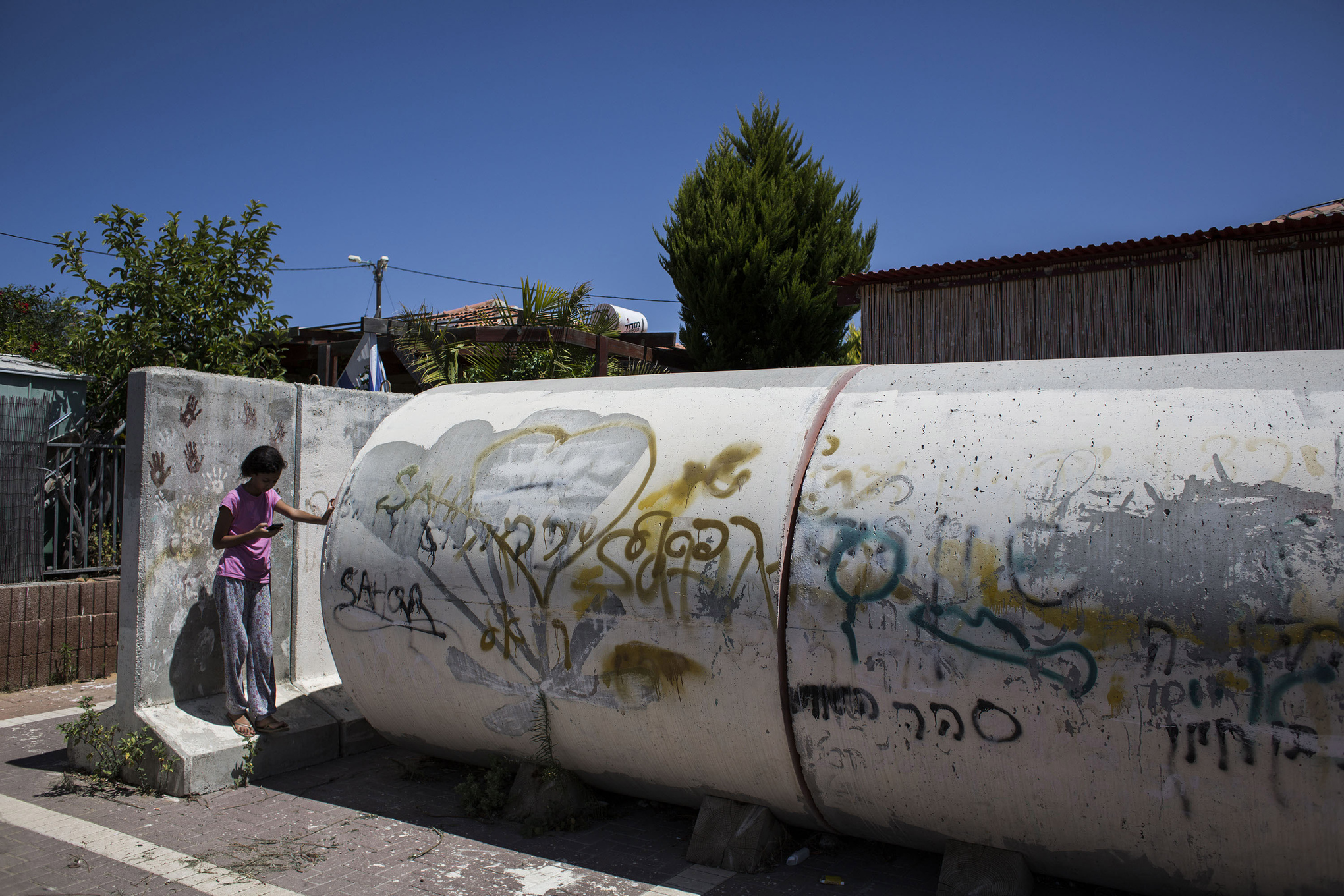 When I asked Zandshtein if he thought that joking about the rockets was a coping mechanism for Israelis or just humor for the sake of humor, he answered, "It's a little of both. The sirens, and hearing random explosions through the day are all scary things, and there's a lot of nervousness in the air, but at the same time, the missile interception system keeps us feeling relatively safe."

'both sides have many people who ... are just going about their lives, trying to make the best of any situation'

These exchanges of Palestinian rockets and Israeli air strikes are experienced very differently, of course, in Gaza itself. It does not obviate the suffering of Israelis to note that many more innocent Palestinians are killed by Israeli air strikes than Israelis are by Palestinian rockets. Gazans do not have warning sirens to alert them or American-funded missile-defense systems to protect them or, typically, bomb shelters strong enough to shield their families. None of this eases Israeli suffering one iota, nor does in any way soften or excuse Hamas and other terrorist groups from firing at Israeli civilians, but it is worth pausing to remember.

"I find it very important to make the difference between a government and it's citizens," he says. "Whether you agree or disagree with anything the people in charge of Israel or Gaza do, at the end of the day both sides have many people who'd rather not have anything to do with it, and are just going about their lives, trying to make the best of any situation, I do that by drawing comics about it."