How a brain chip could heal veterans' memories

Share All sharing options for: How a brain chip could heal veterans' memories

The government wants to put chips in people's brains — for, it claims, perfectly good reasons. On July 9, the Department of Defense announced that it's planning to give out $40 million for researchers to make brain implants to help people with impaired memory. The idea is to help these people have a more normal ability to form new memories as well as access earlier ones.

This sounds like crazy-town science fiction, but the project, known as Restoring Active Memory (RAM), is very real. And there's some serious research backing it up. Here's what you need to know:

The Pentagon is interested in memory impairment because it's a frequent problem for service members with traumatic brain injuries, making it more difficult for them to live a normal, independent life. So the Department of Defense's research arm, DARPA, is funding technologies that might be able to restore people's abilities to remember things. Most of the support is for groups centered at the University of Pennsylvania and UCLA.

About 1.7 million americans have traumatic brain injury a year. 5 million have alzheimer's

But the program could also end up helping other people, too. About 1.7 million US civilians are affected by traumatic brain injury each year, from things like car accidents and sports. And it's possible that memory implants could one day aid people with Alzheimer's, which affects up to 5 million people in the US.

Beyond that, the project is part of a larger, worldwide effort to fully map the human brain. Specifically, this research is part of DARPA's support of Obama's billion-dollar BRAIN initiative to help chart the locations of all the brain's neurons, their roughly 100 trillion connections, and how they all function.

Of course, it's possible that the Pentagon has other interests in memory chips. Is DARPA hoping someday to make super soldiers with superhuman memory? Maybe. You never know. But the agency hasn't said anything publicly about that — they say that the research is aimed at people with memory problems.

Brain implants are actually nothing new 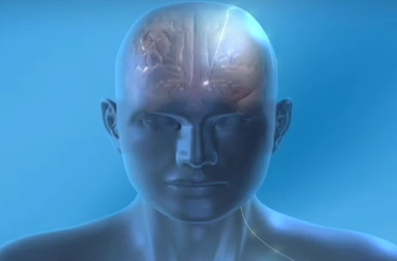 Illustration of an actual deep-brain stimulation device currently on the market. Medtronic

Researchers have already created working brain implants to help people do other things. Cochlear implants, for instance, have allowed some 300,000 people to hear. The US government has also approved implants to treat Parkinson's disease and a movement disorder called dystonia. (Medtronic's deep-brain stimulation system, for example, has been implanted in some 110,000 people.)

The groups that are part of DARPA's RAM project have already shown that implants are at least conceivable. For example, in 2012 the UCLA group published a paper in the New England Journal of Medicine showing that stimulating the brain's entorhinal cortex as people learned a spatial route let them remember it better.

First, the research will involve people with epilepsy and Parkinson's

The first phase of the research will involve people who already have some sort of electrical implants in their brains.

For example, patients with epilepsy and Parkinson's sometimes have electrodes implanted to reduce their symptoms. And both sometimes have problems with memory. So the researchers involved in this project will use patients with these existing implants to record neuron activity during memory tasks. That will help them figure out what kinds of signals are involved in making and recalling memories.

The researchers will also collaborate with engineers — including a group at Lawrence Livermore National Laboratory — to make devices that can stimulate the brain in order to boost memories. They'll then test these devices in people with traumatic brain injuries. DARPA says that the project will also involve some research with animals.

Memory implants would take a while to reach the market

These things do take time. Both the UPenn and UCLA teams claim that they plan to have actual implants that could be used on actual people within four years. However, as is often the case with science, whether they'll reach that goal is questionable.

They're dealing with many unknowns, and challenges could crop up from a number of directions. For example, the scientists may encounter issues on the biology side, figuring out which brain signals matter most for memories. (An implant will only be as good as the data that tells it what to do.) Or perhaps they'll run into engineering issues, discovering that it's difficult to create tiny implants that can record and stimulate the right places in the brain in just the right way. Or perhaps they'll discover that the implants cause unwanted side effects. It's not yet clear.

That said, DARPA isn't just throwing $40 million at the scientists without any strings attached. The researchers have certain agreed-upon goals that they have to meet at various time points along the way. And if they don't meet them, it's possible that their funding will be reduced.

new IMPLANTS COULD BE TESTED ON PEOPLE WITHIN FOUR YEARS

And if everything goes well? If these teams are successful, getting an implant on the market would probably take at least several more years of tests to make sure that it's both safe and effective. If the device is brand new, it will have to go through the regular FDA approval process of clinical trials.