Share All sharing options for: Why the US hasn't banned vaping — and a map of countries that have

Numerous medical groups are calling for tighter controls on electronic cigarettes. "As a precaution," the joint statement from the Forum of International Respiratory Societies read, "electronic nicotine delivery devices should be restricted or banned until more information about their safety is available."

As e-cigarettes keep rising in popularity, more than a dozen countries have already taken steps to ban the nicotine vaporizers because of worries over potential health risks such as poisoning and addiction. At the same time, e-cigarettes keep netting celebrity endorsements, including one from vaccine-denying former Playboy bunny Jenny McCarthy who swears by their health benefits.

With barely any regulatory steps taken, the United States remains a bit of a wild west for e-cigarette use—although that could be changing soon.

Why the e-cigarette free-for-all in America?

"The key reason is that e-cigarettes weren't part of the Tobacco Control Act," explained T.R. Goldman, author of a new Health Affairs paper on e-cigarettes. Essentially, the Family Smoking Prevention and Tobacco Control Act of 2009 gave the US Food and Drug Administration the power to regulate the tobacco industry. "But e-cigarettes were left out of that," he explained. So was other tobacco-related merchandise, including cigars and nicotine gels.

By April 2011, the FDA announced it was going to address this loophole. Finally, this past April, they moved ahead and tabled a draft rule that will redefine e-cigarettes as "tobacco products." Once finalized and enacted—which may take another few years—e-cigarettes and other forgotten tobacco merchandise will be FDA-regulated under the Tobacco Control Act.

But the molasses-like legal process isn't the only reason for the lag: starting in 2008, the FDA attempted to clamp down on e-cigarettes by other means. And failed. "They tried to regulate e-cigarettes as a smoking cessation device, and got sued by the [e-cigarette] companies," explained Goldman. The FDA argued that e-cigarettes were unapproved drug-delivery devices, while the companies fought back, saying they weren't marketing e-cigarettes that way. They successfully sued the FDA in the federal court and the US Court of Appeals. So—surprise!—the legal squabble between government and industry played a role in delaying oversight, too.

Who has already banned e-cigarettes?

From Brazil to Brunei, several countries have banned e-cigarette advertising, sales, and use in public places mostly on the precautionary principle (see map). Many others have already enacted regulations, while still others are heading toward stricter controls. Austria classifies e-cigarettes as medicines, while the UK will do the same by 2016. 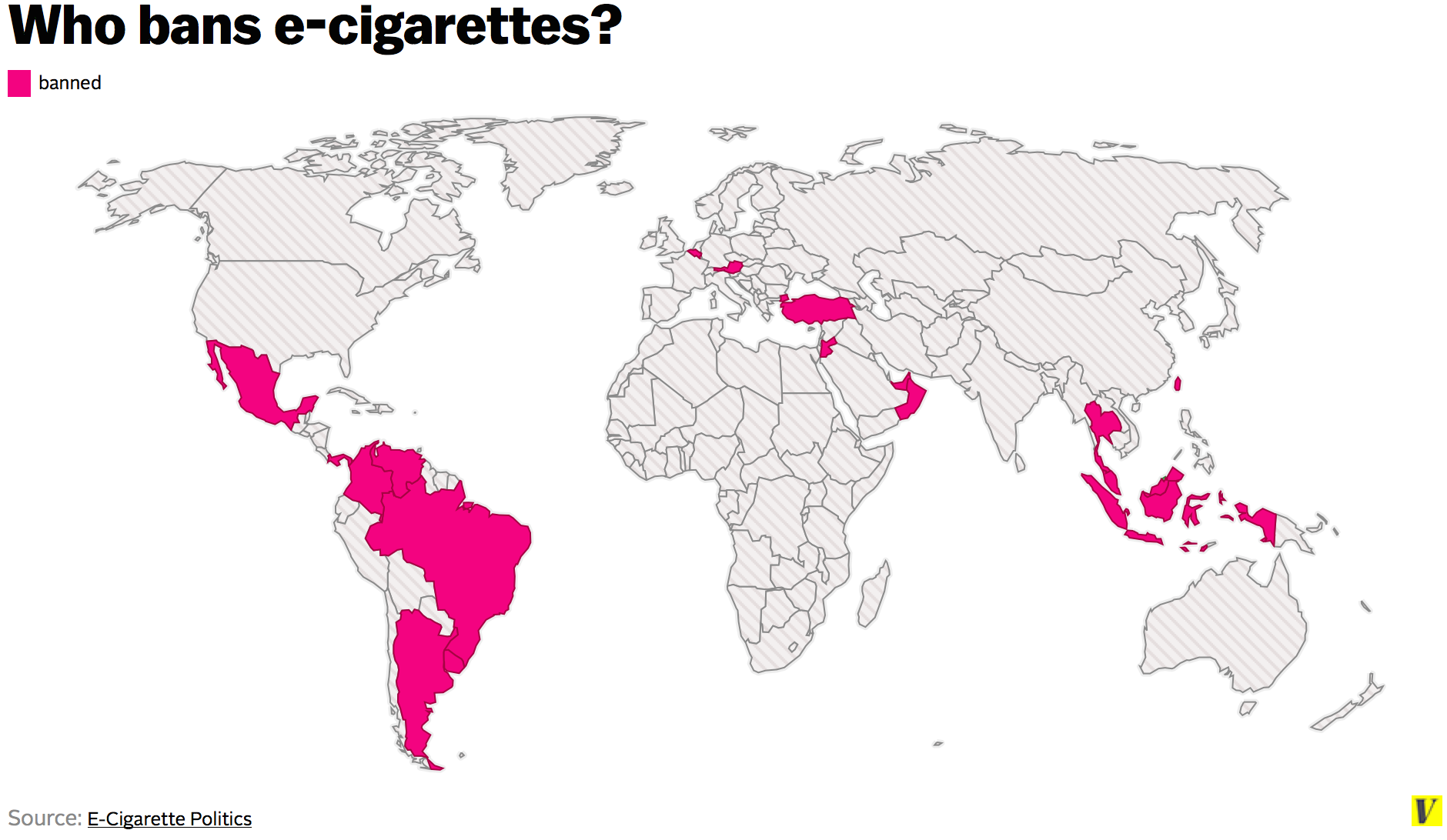 In the US, states have gone ahead with their own rules and regulations, taxing e-cigarettes and restricting sales to minors. Still, they don't have the authority of the FDA to ensure quality, safety, and consistency across the hundreds of brands on store shelves. They also can't fight illegal marketing claims.

For now, the FDA says it wants marketing oversight, a ban on free samples and sales to minors, as well as warning labels on e-cigarette packages. The reception to the proposed rule was mostly positive, though public health advocates were upset that the draft regulations didn't address issues such as flavorings that make the devices more appealing. Before it can do that, though, the FDA has to gain legal jurisdiction over e-cigarettes. This means celebrities like public-health foe Jenny McCarthy can continue claiming vaping is the smart alternative to smoking.

What about the evidence?

Every matter of public health is a balance of harms, benefits, costs, and trade-offs. With e-cigarettes, there's concern that we simply don't yet know enough about them to calculate their impact.

Some of the main health debates are over whether e-cigarette's potential as a smoking cessation aid will outweigh other known and unknown harms from vaping. There are concerns over the health effects of nicotine — even if it's not burned — and that secondary exposure to vaping might be harmful. There's also the question of whether e-cigarettes will re-normalize smoking and nicotine use, and whether more people will end up using real cigarettes as a result. The potential health gains for an individual might be overshadowed by an overall increase in smoking prevalence at the population level.

Right now, the answers aren't clear. Some studies have shown that e-cigarettes help people smoke fewer regular cigarettes, while others have demonstrated only modest gains over existing smoking cessation methods, like nicotine patches.

As Dr. Dean Schraufnagel of the University of Illinois, summed up, "the studies that have been done, which are small and inconclusive, have been mixed. And if you remove the ones that have been supported by the makers of the nicotine-delivery devices, there's really not adequate evidence that e-cigarettes are beneficial." For now, the FDA has funded 48 research projects to find out more.

Meanwhile, what we do know is that e-cigarettes are gaining popularity around the world—and fast. In the UK, the number of vapers rose to 1.3 million in 2013 from 700,000 the previous year. In September 2013, the US Centers for Disease Control reported that e-cigarette use had doubled among teenagers from 2011 and 2012. With the growing population of vapers, so too grows the potential market for e-cigarettes—and manufacturers' potential losses with stricter regulations.