In perhaps the most characteristically Berkeley move ever, the City Council of Berkeley, CA has approved an ordinance that will require medical marijuana dispensaries to set aside at least 2% of their weed for customers making under a certain amount, say $32,000 for a single person or $46,000 for a family of four. The motivations behind the ordinance are commendable; regardless of what you think of the merits of medical marijuana, if it's recognized as medicine then it ought to be subsidized for low income people the same as any other medicine. The most straightforward way to do that would be to just let Medicaid and the state Obamacare exchange pay for it, but I wouldn't hold my breath on Congress letting that happen, and it makes sense for Berkeley to be looking for other solutions in the meantime.

That said, Berkeley has hit upon one of the worst models you can think of for providing assistance to poor people. Both aspects of the ordinance — the requirement that dispensaries set aside the weed, and the income cutoff — reflect common approaches for designing safety net programs, each with real drawbacks. Here's what they got wrong, and how they can do better. 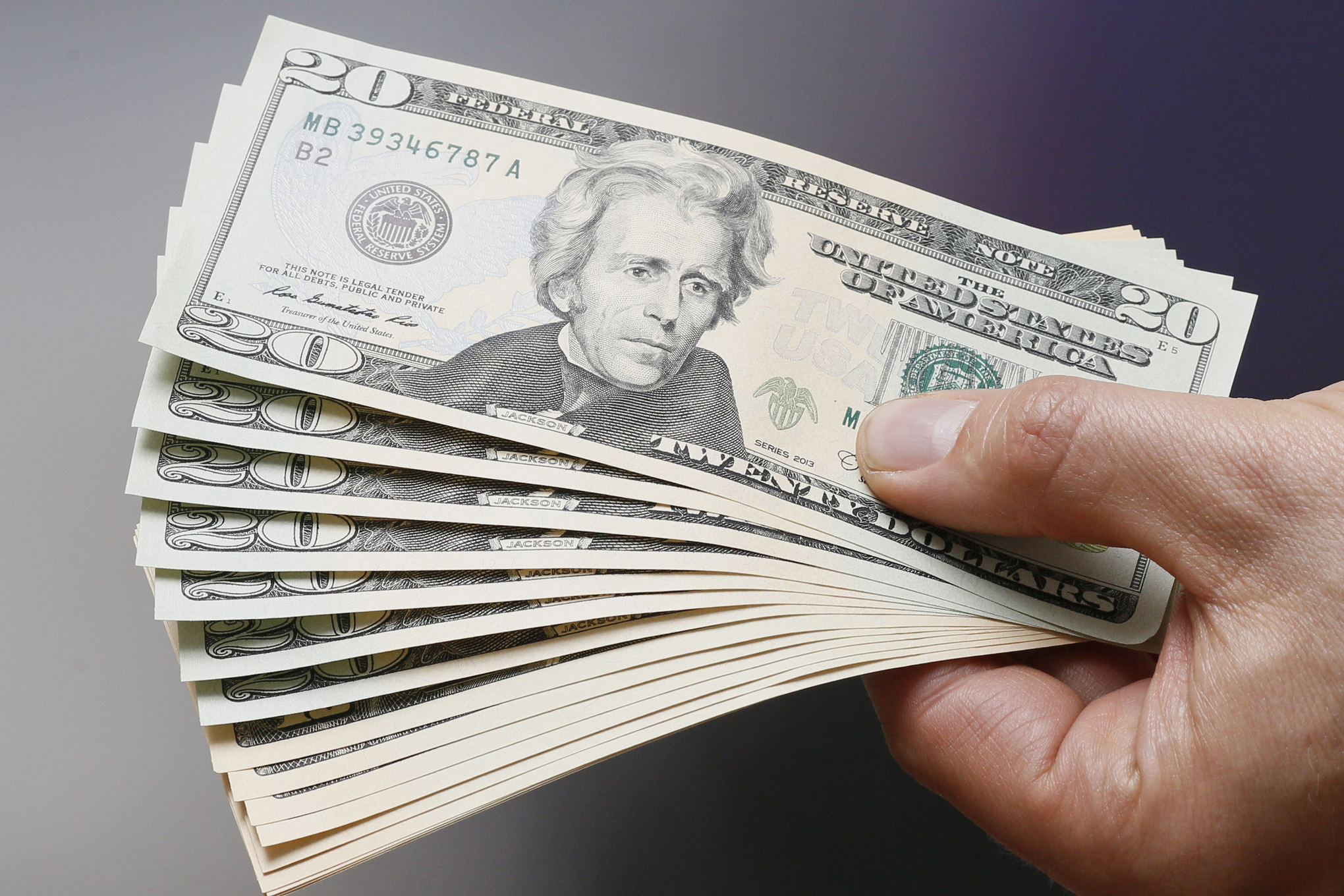 It's easy to see the appeal of making dispensaries pay to provide weed to low-income people. It allows the de facto creation of a new social welfare program without giving the appearance of raising taxes. But it creates a de facto tax on marijuana dispensaries, who have to take on a certain amount of losses for the privilege of operating in Berkeley, and then uses the proceeds to help poor people get access to medical weed.

The problem is that those proceeds could be raised in a whole number of better ways. As Matt Yglesias explains here, taxes targeting only a few things are distortionary and require higher rates than if Berkeley were to, say, just tax every company within its boundaries, rather than just marijuana providers. The amount Berkeley would need to raise its business tax, or income tax, or property tax to raise the necessary amount of money to create a low-income medical marijuana entitlement would be much lower.

What's more, targeting only dispensaries provides a disincentive against both going into the dispensary business and against locating your dispensary in Berkeley. If a dispensary owner finds the requirement is cutting into their bottom line excessively, it's pretty easy for them to move across the border into Albany or Emeryville or Oakland and evade it, denying Berkeley their tax receipts and Berkeley's poor residents their free weed. And even if one really wants their dispensary to be in Berkeley, if they're on the fence about starting up a dispensary or continuing their existing one, the requirement could provide an incentive against on the margins.

This is hardly the only instance you can find of policymakers preferring to mandate provision of a good rather than provide it themselves. That's how affordable housing set-asides work: cities require developers to sell a certain number of units at below-market rates, which amounts to a developer tax which funds a (highly inefficient) housing subsidy. It's how employer mandates, like paid sick days or the Obamacare employer mandate, work. And it can be effective in certain contexts, particularly when an employer is the one being mandated. But it's not the best approach if you want to guarantee access to a good for poor people. There's a reason we give people food stamps rather than mandating that supermarkets give away a certain percentage of their food to food pantries: it's more flexible for customers, it allows funding from a more sensible source, and it doesn't discourage people from starting supermarkets in areas with lots of low-income residents.

So just as food stamps are better than a food mandate, a weed stamp program would be better than the Berkeley weed mandate. 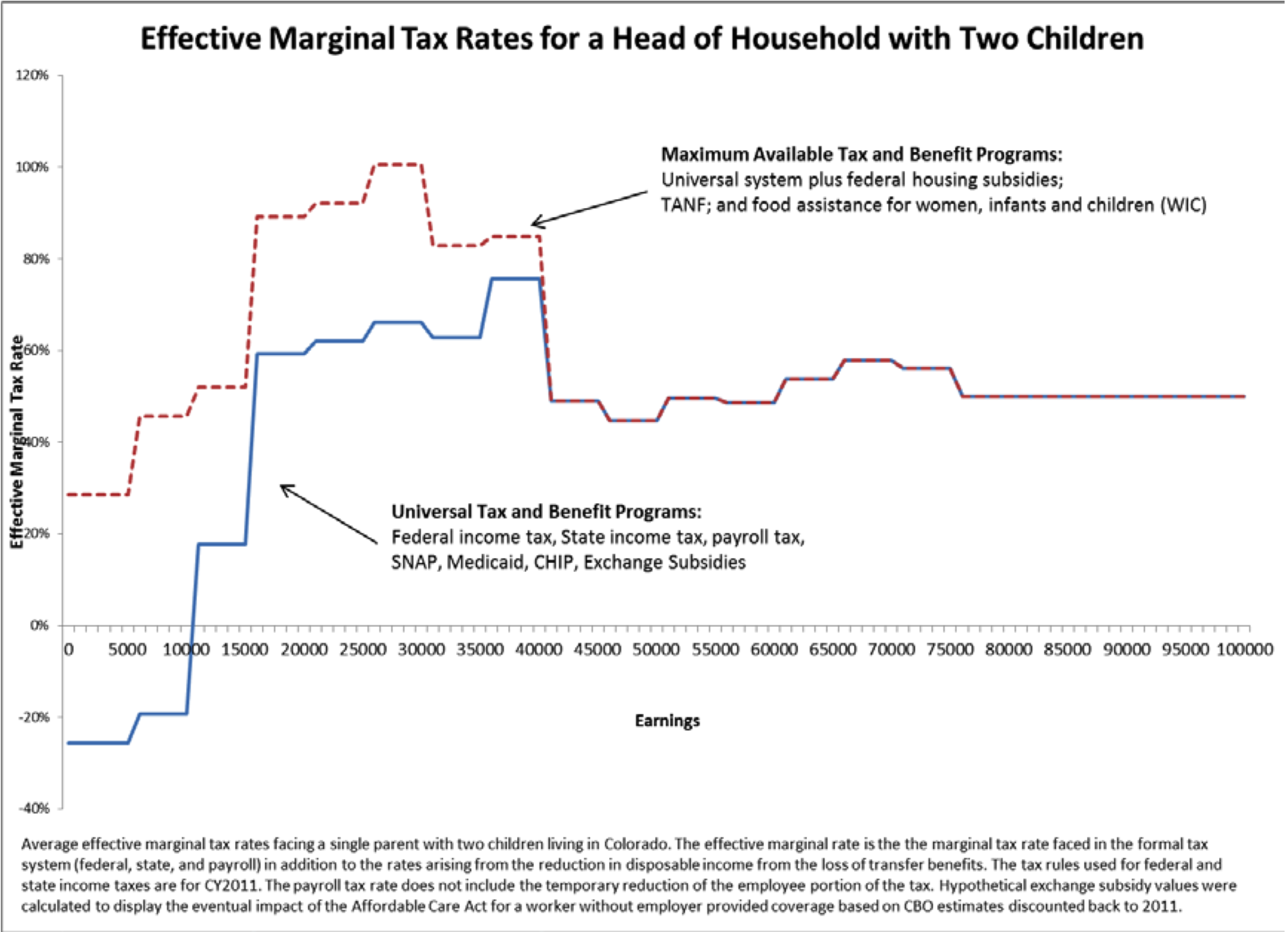 Chart by Eugene Steuerle of the Tax Policy Center/Urban Institute.

But simply passing a law saying that you could get, say, $100 in weed a month for free if you make under $32,000 a year would also be a bad idea, for the same reason that the hard income cutoff in the Berkeley bill as written is a bad idea. That's because "cliffs" like that effectively create high marginal tax rates, which are bad both for the poor people these programs are supposed to benefit and for the economy as a whole.

Think of it this way. Let's say you're a single person working an hourly job and are set to make $31,999 this year. You also have an anxiety condition for which you take marijuana, provided free of charge from a Berkeley dispensary. If you pick up one more hour of work (at $12.53, Berkeley's new minimum taking effect in 2016) you'll be making over $32,000, and lose access to $100 in weed a month. So you'll gain $12.53 but lose, over the course of the next year, $1,200 worth of weed. You'll lose nearly ten times as much money as you gain if you work more. That rate obviously falls the more hours you add on, but it's still a really awful policy for the working poor.

It's hard enough for working-class people to pick up hours in this economy that we really shouldn't compound the problem by creating those kinds of massive work disincentives. It's an especially bad idea in light of the fact that existing cutoffs and phaseouts from programs like food stamps and Medicaid already create very high effective rates on poor people. In some cases rates can near 100 percent or even, as in the cutoff case, go over. That's terrible for the economy but most importantly it's terrible for the people who face those rates and are punished for trying to earn more for their families.

It's a tricky problem to fix. You can replace cutoffs like the Berkeley program's with phase-outs. For example, Berkeley could say that after you reach $32,000 a year, each addition $1,000 you make means $10 less free weed. That lowers the increased marginal rate created by the program, but doesn't eliminate it entirely. To do that, you'd need for a program to be truly universal. If Berkeley were to just say, "Everybody regardless of income gets $1,200 a year to buy medical marijuana as long as they have a prescription," that'd create none of these problems. But it'd be far more expensive, which is why cutoffs and phaseouts and other kinds of "means-testing" are so popular.

In the health care context, the solution is actually pretty simple: just provide the same coverage to everybody through a single payer program. Like all universal programs, a single payer program wouldn't increase anyone's marginal tax rates, as your access to free care wouldn't be dependent on your income. If it covered marijuana, it'd solve Berkeley's particular problem too. As it stands, however, health care is actually one of the prime sources of high effective marginal tax rates for Americans right now, because of the phaseouts involved with both Medicaid and Obamacare's insurance subsidies.

If you're curious about single payer, by the way, be sure to read Sarah Kliff's great feature on Vermont's attempts to implement it, and to watch her explain the concept in the video below: