Why Israel’s racist violence problem is getting worse

Share All sharing options for: Why Israel’s racist violence problem is getting worse

Reading the Israeli press, you get a sense of profound national reckoning. After members of Hamas murdered three Israeli students in the West Bank, which inspired national outrage, a group of Israelis burned a 16 year old Palestinian alive — allegedly in retaliation. Israelis have dealt with Jewish terrorism before, but the national revulsion at the murder makes this time feel different. "This is a wake-up call," Shlomo Avineri, one of Israel's most respected political scientists, told the New York Times. "A line has been crossed ... this is absolute evil."

these attacks 'have certainly got worse in the past two years'

While anti-Arab racism is not rising among Israelis as a whole, according to research by Haifa University, what has happened is that, since the violence of the Second Intifada, Israelis have become much less eager to challenge anti-Palestinian racism on the Israeli far-right - they've become, in other words, more tolerant of intolerance. This has allowed far-right anti-Arab movements to fester, even as they've remained small minorities within Israeli society. The horrific murder of Mohammed Abu Khdeir was, for many Israelis, a wake-up call - an indication of just how ugly these movements had become.

But, for many Palestinians in the West Bank, the murder was shocking but the existence of an increasingly violent Israeli far-right was not. They've been burdened for years with the violence of a different sort of anti-Arab movement, but one that has grown in the same climate of mainstream Israeli indifference: "price tag" attacks by fundamentalist settlers. And while the murder of Khdeir was an isolated but grisly act, the price tag attacks have been less deadly but far more frequent, with 400 in 2011 alone. As Israelis wake up to one form of anti-Arab violence, the far-right soccer-hooligan nationalism of La Familia that killed Khdeir in Jerusalem, they may also want to look to the other Israeli anti-Arab movement wreaking havoc just across the Green Line.

Settler violence against Arabs is on the rise

Right-wing extremists have been a significant force in Israeli politics. The openly racist Kach Party won a seat in the Knesset in 1984, and was polling even higher in the 1988 elections before being banned from participating. Baruch Goldstein, a significant Kach member, killed 29 worshippers at a mosque in the Cave of the Patriarch in the West Bank city of Hebron. Jewish radical Yigal Amir assassinated Israeli Prime Minister Yitzhak Rabin in 1995, while the minister was in the midst of a major push for a peace deal.

The murder of Mohammed Abu Khdeir is of a piece with the ultra-violent Goldstein and Amir tradition. However, the sort of settler violence that has been on the rise is usually lower profile: burning down Palestinian property, scrawling graffiti on mosques,  or physical assaults on Arabs that stop short of deadly force.

These so-called "price tag" attacks have been getting worse in recent years. According to the UN, settler attacks on Palestinians doubled (from 200 to over 400 per year) between 2009 and 2011. 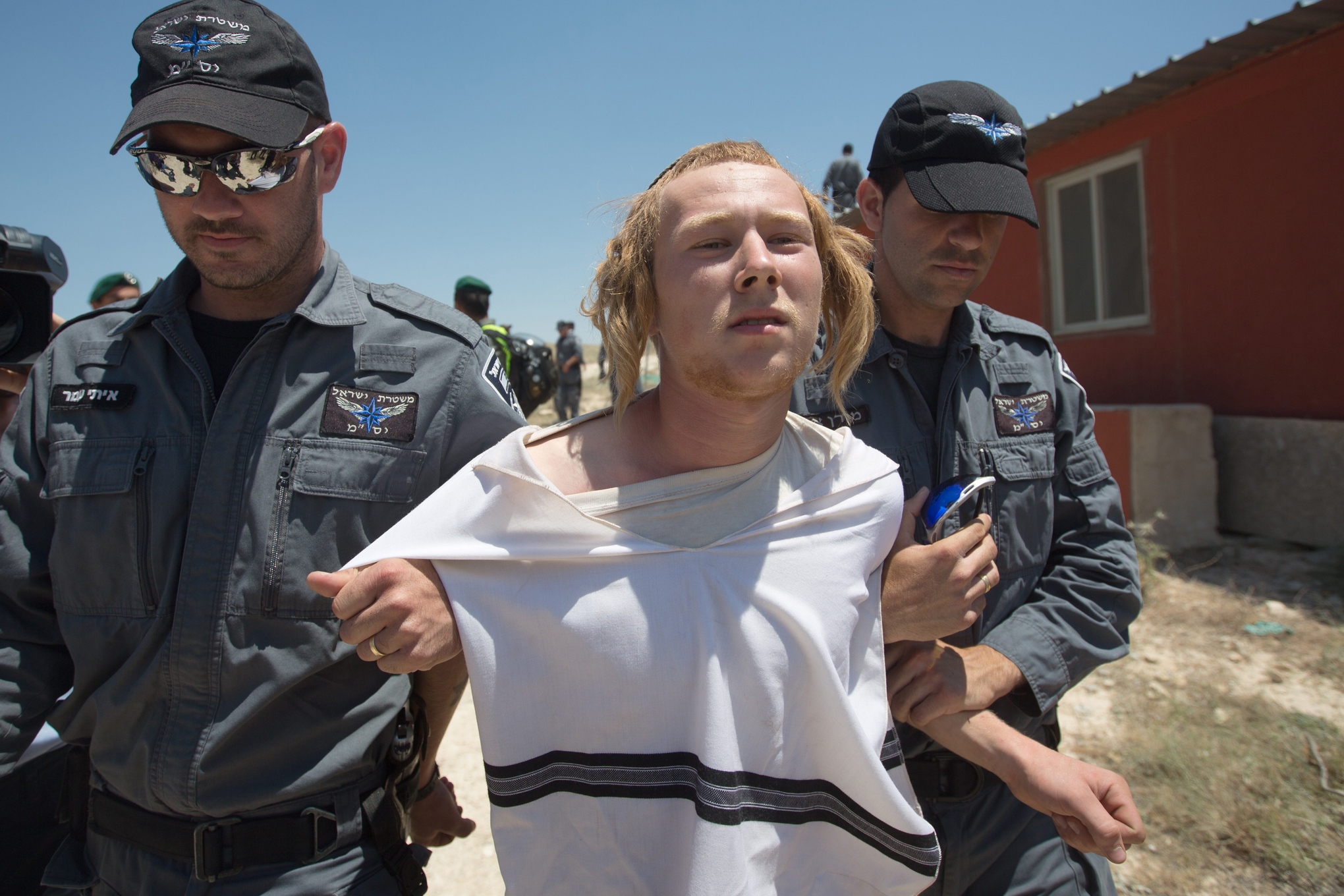 An Israeli settler being evacuated from an illegal settlement. Menahem Kahana/AFP/Getty Images

These attacks are more than just random anti-Arab abuse. Price tag attacks "target Palestinians, pro-peace Israelis, and Israeli soldiers alike for supposedly anti-settlement measures taken by the Israeli government," Georgetown's Daniel Byman and the Brookings Institution's Natan Sachs wrote in a 2012 report on the violence. To make the point truly obvious, the attackers often scrawl the Hebrew word for "price tag" on the wall near attacks.

In a follow-up interview, Sachs said these attacks "have certainly got worse in the past two years." Though no complete data on price tag attacks exist for 2014 yet, the Israeli newspaper Yedioth Ahronoth reports that the problem has gotten acutely worse over the course of the past several months, with the rate of attacks rising.

Price tag vigilantes now enjoy a "whole system of support for the perpetrators, from Rabbis who give their blessings to friends who help the perpetrators cover their tracks," according to Noam Sheizaf, editor of Israeli magazine +972.

But where does this particular kind of anti-Arab violence come from? And why has it gotten so much worse in the past few years?

The price tag attacks are, in a sense, an unintended product of Israel's  2005 withdrawal from the Gaza Strip. When Israel pulled its ground presence out of the Palestinian territory, it also removed about 8,500 settlers. This convinced a radical fringe of the settlement movement that it could no longer trust the government; that to preserve their homes, they needed to take action into their own hands.

"Price Tag actions do not only target Palestinians, but also (and in an almost similar frequency) IDF commanders and equipment," Hillel Ben Sasson, director of projects at the Jerusalem-based Molad think tank, told me. "The goals of attacks on the IDF are to put a price tag on evicting settlements and demolishing illegal construction in them by putting pressure on government authorities and officials to think more than twice before interfering with settler business."

The desired endpoint of this is the demolition of the two-state solution, which would grant separate states to Israelis and Palestinians. For an independent Palestine to be viable, a significant number of the Israeli settlers in the West Bank would have to leave (some settler communities along the Israeli border would likely be allowed to stay as part of a land-swap). If the settlers can convince the Israeli government and public that uprooting enough of the roughly 500,000 West Bank settlers will be more trouble than it's worth, they will have practically ended any chance for a viable Palestinians state.

"To stave off another disengagement of any kind," Byman and Sachs write, settlers "resolved to retaliate against any attempt by the Israeli government to crack down on the movement — hence the birth of the 'price tag' attacks." 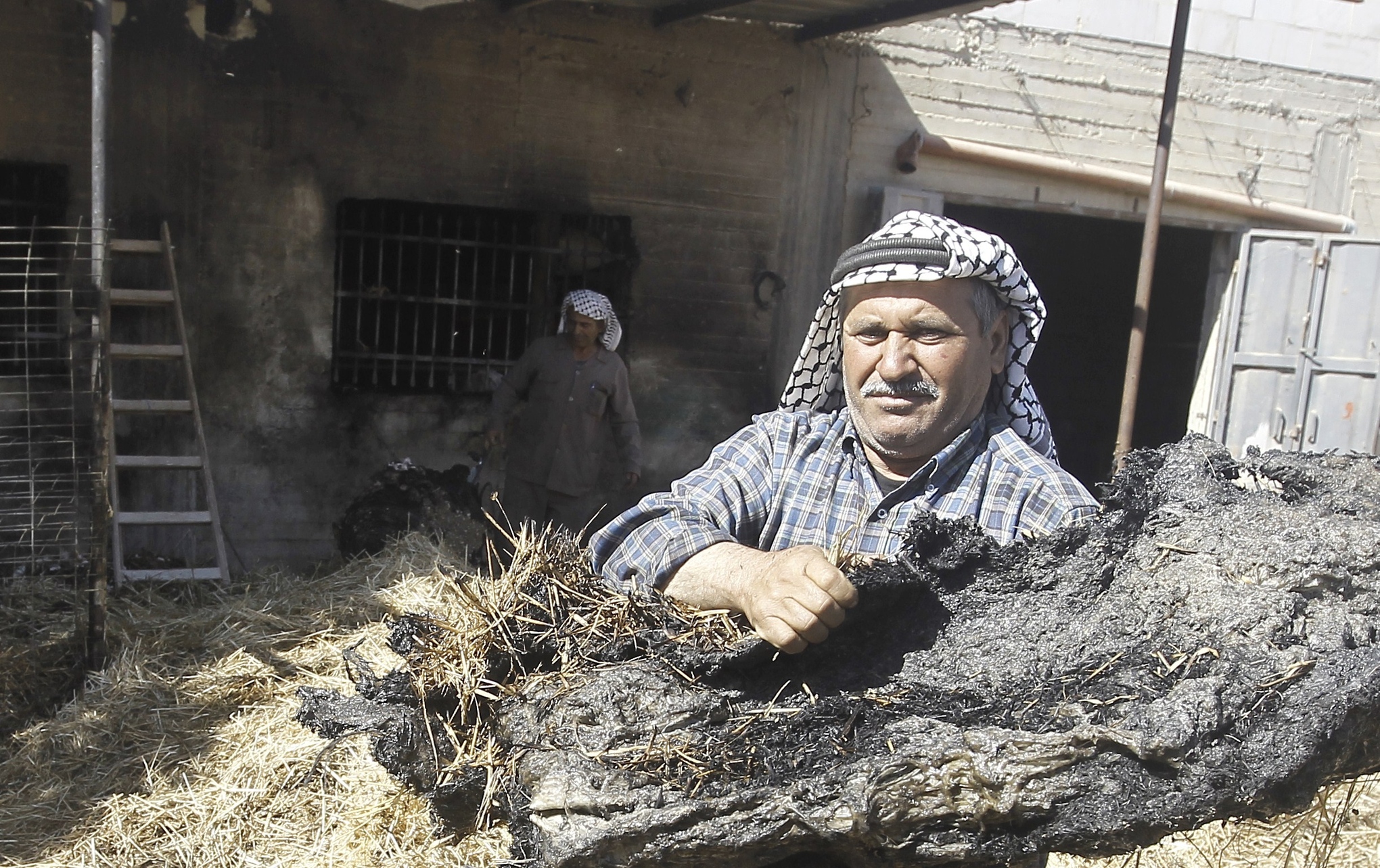 There's been little pressure from the Israeli public to anything about this because mainstream Israeli has becoming increasingly numb to Arab concerns. Since all of the violence targeted at Israeli civilians during the Second Intifada, Israeli attitudes toward Palestinian suffering have hardened. "The brutality of the Second Intifada," according to Sachs, made Israelis "extremely impatient with the argument that they need to think about the justice and the human needs of a society that supports these actions. It negatively affected "the degree to which they're tolerant of hate speech."

"The fringe has chosen a strategy of ongoing, low-level violence that's convenient for Israeli society to write off as a nuisance," Dahlia Scheindlin, an Israeli public opinion analyst, explains. Israelis "say that it's not really comparable to what the Palestinians do."

The lack of public anger contributed to lax Israeli enforcement, allowing price tag to escalate with impunity. Data compiled by Yesh Din, a group that monitors settler violence, shows that "between 2005 and 2013 just 8.5 percent of investigation files ended in the indictment of Israelis suspected of harming Palestinians and their property."

What's more, the July 2013 report found that "no meaningful action has been taken to correct the situation and improve the quality of investigations." Sachs believes there"there has been a concerted effort by the Shin Bet [Israeli FBI equivalent] and the police" to address price tag in 2014. However, he allows, "it's not been as forceful as one would like."

there's been little pressure from the Israeli public

It's important to distinguish Israeli indifference from an outright growth in racism. The 2012 edition of Haifa University's survey of Israeli attitudes towards Arabs, considered the most comprehensive, found no such rise in broad anti-Arab racism. Sociologist Sammy Smooha, who conducted the survey, wrote that "there is no evidence in the Index data and in the surveys conducted since 1980 of a toughening of Jewish attitudes toward Israel's Arab citizens." Presumably, any clear rise in anti-Arab racism would affect Israeli Arabs and Palestinians alike.

Instead, Israelis are increasingly uninterested in aggressively challenge the minority who are outright racists — be they soccer hooligans like La Familia or violent price tag settlers. There's just not a lot of willingness to get out and demand that the government do something about these groups in the name of Palestinian rights. And without any enforcement, the price taggers have had a free hand to escalate as much as they'd like.

Will Israel crack down on price tag — or will it spread?

"Price Tag is a very political crime," Sheizaf, the journalist, says. "It aims to cause a public effect" — convincing the Israeli public that a withdrawal from the West Bank would cost more than it's worth.

The public's critical role is why the Abu Khdeir murder, and the subsequent fighting throughout Israel and Gaza it sparked, is such a watershed moment. The violence has brought an enormous amount of public attention to the question of anti-Arab violence in Israel — attention for good and ill.

Start with the good: mainstream Israeli society was horrified by the murder. Even the hardline settler parties condemned it in absolutely uncertain terms. "What happened with Muhammed Abu Khdeir," according to Scheindlin, "throws off people's narratives [about price tag]. I know a lot of people on the right are having a spiritual crisis."

It's not clear whether this existential shock will prompt an Israeli backlash against price tag violence, or whether any such backlash would lead to more robust enforcement against the movement.

But there's a dark side to this story.

After the bodies of the three murdered Israeli boys were found, an Israeli Facebook page called "People of Israel Demand Revenge" had received 35,000 likes before being taken down. A mob of 100 Jews attacked three Arabs on the streets of Jerusalem, part of a wave of "revenge" attacks against Arabs for the killings.

Both Sachs and Sheizaf worry that social media could strengthen price tag. The easier it is for extremists to find and radicalize one another, the stronger extremist groups get. The ongoing fighting in Gaza could intensify that effect. Palestinian rockets and Israeli deaths or injuries could make Israeli fringes more receptive to the hardline anti-Palestinian message.

So this may be an inflection point for price tag. We'll find out soon enough.