Share All sharing options for: How the Koch brothers' campaign to hurt Obamacare may have actually helped it

Anti-Obamacare groups that poured millions into attack ads might have inadvertently given the law a boost.

A new analysis finds states that did really well at signing people up for the Affordable Care Act tended to have higher numbers of ads denouncing the law. You see that in this scatter plot, drawn up by Niam Yaraghi at the Brookings Institute who writes about the connection here. 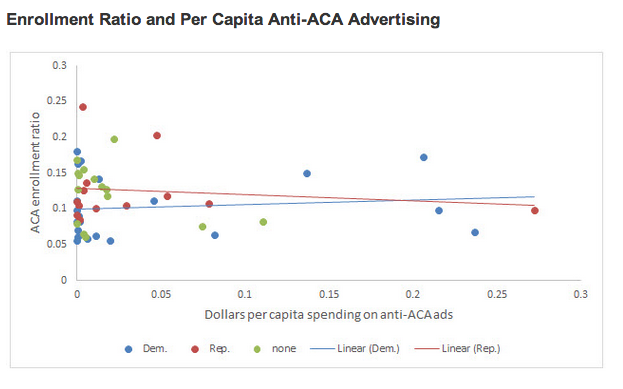 What you see on the Y-axis is what Yaraghi describes as each state's "enrollment ratio," which is the percent of people in each state eligible to enroll in Obamacare who actually did. On the X-axis is per-capita ad dollars spent on anti-Obamacare ads.

There's generally a positive relationship between more anti-Obamacare ad dollars and a better enrollment ratio. "After controlling for other state characteristics such as low per capita income population and average insurance premiums, I observe a positive association between the anti-ACA spending and ACA enrollment," Yaraghi writes.

Anti-Obamacare ads certainly aren't the only reason people signed up for health insurance. In Kentucky, for example, a state with some of the highest enrollment and ad spending, the state ran a really great private insurance marketplace.

At the same time, there are a few plausible pathways where anti-Obamacare ads could encourage enrollment. One that Yaraghi suggests is that the attacks could have raised awareness about the health care law, letting people know that "a governmentally subsidized service" was new and available. It's also possible that they made the future of Obamacare seem more uncertain, which could encourage people to sign up quickly.

"People who believe that subsidized health insurance may soon disappear," Yaraghi writes, "Could have a greater willingness to take advantage of this one time opportunity."

And that means that the Koch brothers, who spent an estimated $30 million on ads opposing Obamacare, might have actually had a hand in getting people signed up for insurance coverage.