Colorado's legal pot market is bigger than anyone anticipated

Share All sharing options for: Colorado's legal pot market is bigger than anyone anticipated

Colorado's legal marijuana market is bigger than anyone anticipated, and it's supported by a few heavy pot users, according to a new market analysis.

The study, conducted by the Marijuana Policy Group for the Colorado Department of Revenue, combined its own analysis and other resources, including state data and federal surveys, to estimate certain aspects of Colorado's legal pot market. Here are three of the most notable findings.

1) Demand for marijuana is 111 percent higher than once estimated 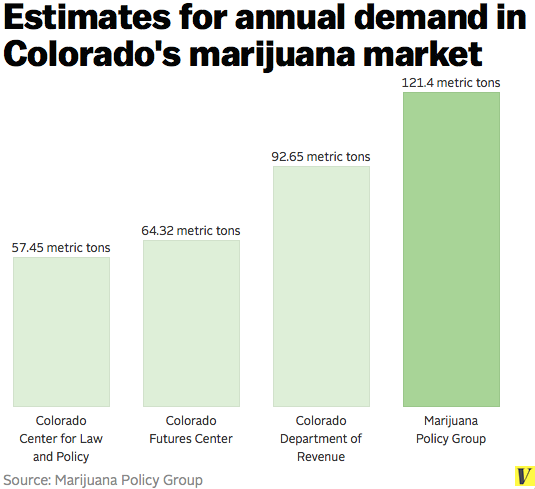 This doesn't necessarily mean that demand for pot is rising. As a result of legalization, it's going to become a lot easier for state officials and researchers to track a legal, licensed, regulated pot market than underground black and gray markets.

A majority of pot users consume the drug up to five days a month, but they make up just 3.6 percent of overall demand for marijuana. About two-thirds of the market is supported by nearly daily users, who make up just one-fifth of Colorado's marijuana users. 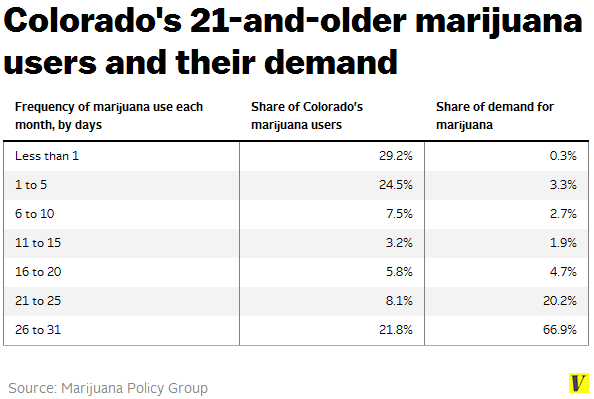 This is what Mark Kleiman, a drug policy expert at UCLA, describes as a for-profit incentive that's at odds with society as whole. Kleiman, who supports a more regulated form of legalization, says marijuana businesses, just like for-profit alcohol and tobacco businesses, want to get people consuming as much of the drug as possible, because heavy users buy a lot more pot.

"Their best customers are the problem users"

"Their best customers are the problem users," Kleiman says. "They are an industry with a set of objectives that flatly contradicts public interest."

Advocates of the current legalization scheme argue that the industry can be managed through proper taxes and regulations. In Washington, for instance, state regulators imposed stricter oversight on marijuana edibles after problems popped up in Colorado. Similar restrictions could keep other potentially negative aspects of the market in check.

Marijuana is also much safer than alcohol and tobacco. So while heavy pot users might not be desirable for society, they're certainly not as costly as heavy tobacco and alcohol users.

3) In some parts of the state, visitors buy 90 percent of all recreational pot sold

Colorado attracts a lot of tourists (60 million of them in 2013), many of whom visited for the state's expansive, beautiful outdoors. It's not surprising, then, that out-of-state visitors make up 90 percent of retail pot sales in tourism-driven mountain communities.

The Marijuana Policy Group cautions that all these numbers are rough estimates, and revised estimates will be released in 2015 after more data becomes available.

For now, the study is the best look yet into Colorado's legal pot industry. The findings show a marijuana market that's much larger than anyone anticipated, but with more reliance on heavy pot users than some would like.