How uptight is your state?

Share All sharing options for: How uptight is your state?

America's states greatly differ in their laws, social norms, and how those rules are enforced.

In a recent study, University of Maryland researchers Jesse Harrington and Michele Gelfand ranked states by how "tight" or "loose" they are with enforcing rules and tolerating deviance. Researchers looked at a range of social factors, including the legality of corporal punishment in schools, the rate of executions from 1976 to 2011, and the severity of punishment for possessing of marijuana.

The researchers, in other words, ranked states by how uptight they are. Here are the results: 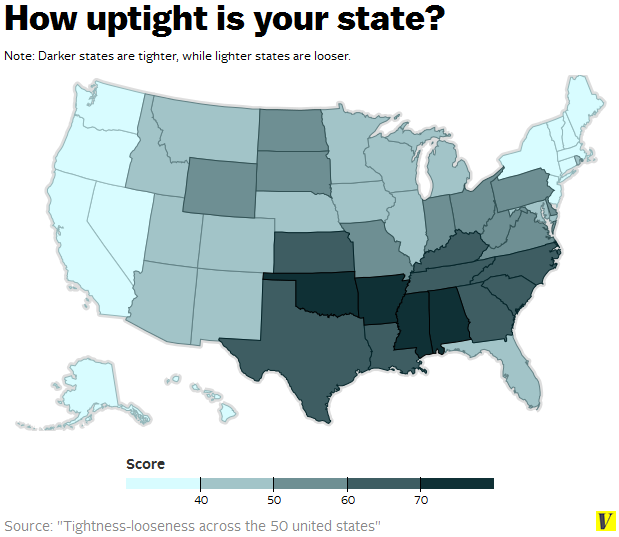 The researchers, however, emphasized that politics are a separate metric than tightness and put forward another possible explanation for why some states are more uptight than others. States with stricter rules tend to have experienced a greater number of ecological and historical threats, such as fewer natural resources and more natural disasters. More uptight states, in other words, have a reason to be cautious, while looser states might feel like they can afford to be more relaxed.

A state's level of tightness correlates with all sorts of other factors. The most uptight states tend to have higher incarceration rates, lower levels of happiness and creativity, more charges of workplace discrimination, and lower circulation of pornographic magazines. But the uptight states also tend to have more social organization and less homelessness, illicit drug use, and binge drinking. Economic inequality and crime didn't correlate with a state's tightness or looseness.

The authors conclude, "Put simply, both tightness and looseness have relative costs and benefits, depending on one's vantage point."