Share All sharing options for: Could Brazil's epic World Cup loss cost its president her job?

Rarely has a team been spanked as badly as Brazil was in Tuesday's World Cup semi-final against Germany. Yet the person who's got to feel worst about the loss wasn't on the field: Brazil's President Dilma Rousseff. Because, as crazy as it seems, there's a real chance that Brazilian voters will punish Rousseff for Brazil's epic defeat in the country's October elections.

Rousseff is the frontrunner, but she's vulnerable

Right now, the left-populist Rousseff is the favorite. She's polling right around 50 percent, while the two opposition candidates — the more conservative Aécio Neves and left-wing leader Eduardo Campos — split the anti-Rousseff vote. If Rousseff gets more than 50 percent in the first election, she wins outright. If she gets under 50 percent, she'll be forced into a second-round runoff with whoever placed second.

"I think her chances of winning are still certainly pretty strong, well better than anyone else's chances," Barry Ames, a University of Pittsburgh professor who studies Brazilian politics, says. 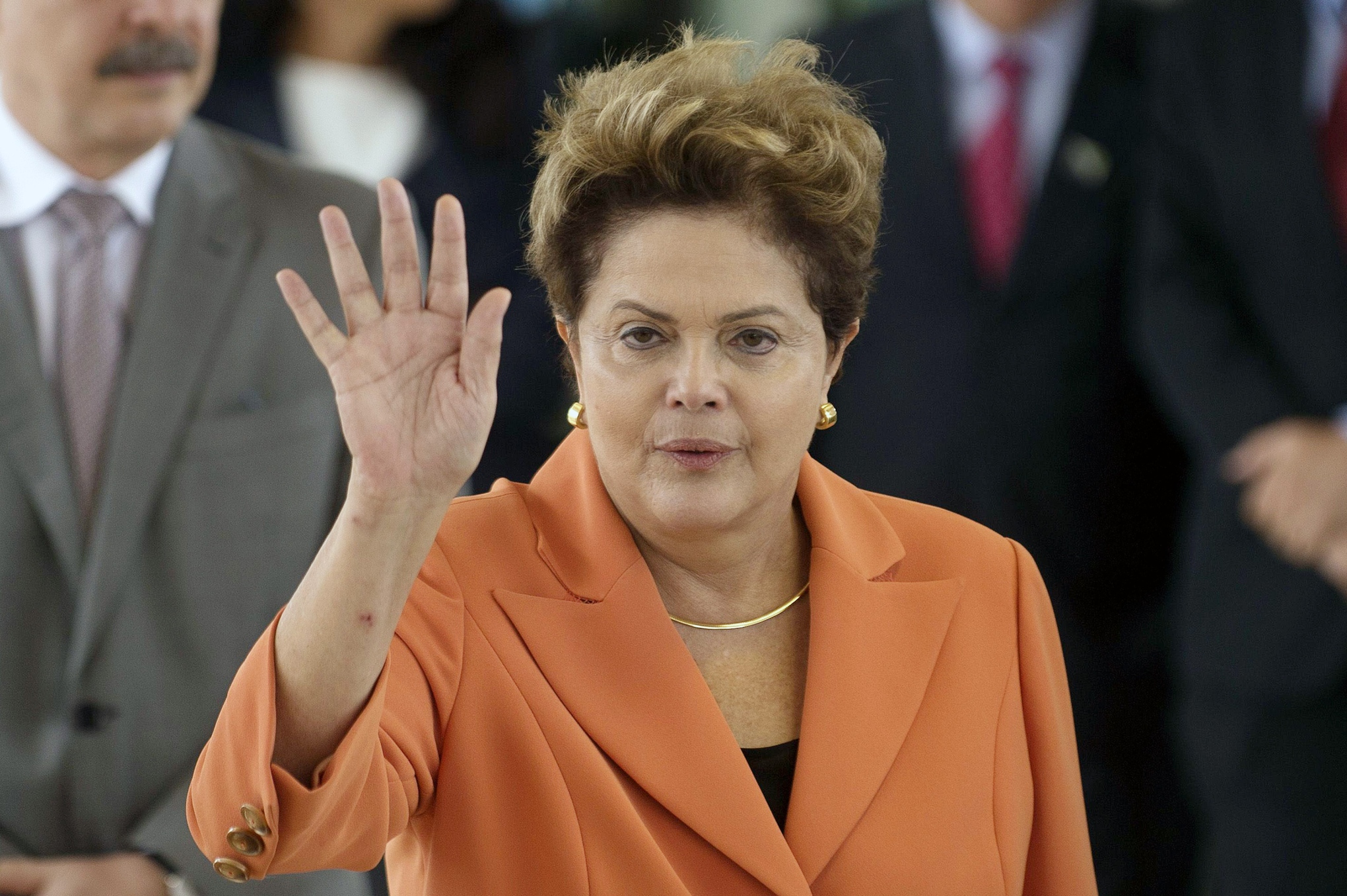 However, formal campaigning has barely begun, and Ames thinks Rousseff is vulnerable going forward. "It depends on how good the other campaigns are; she's not a great campaigner," he says. "The economy is pretty weak, and inflation is pretty high."

Enter soccer. There's no polling available after Brazil's loss yet, but there are at least two reasons to think that the outcome of the World Cup might actually matter.

Happy voters vote for incumbents — and unhappy ones don't

First, there's actual political science that suggests that sports affect elections — at least in the United States. Three economists at Stanford and Loyola Marymount found that, in areas where the local college football team won less than 10 days before an election, the incumbent president, governor, and senator got an average 1.61 percentage point boost. Areas where people cared more about college football, even after controlling for confounding variables, showed higher effects. 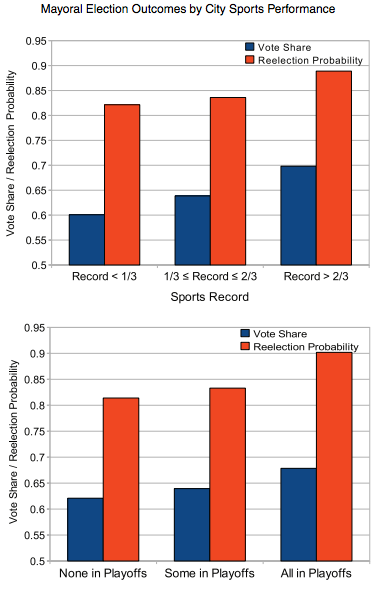 To make sure that they weren't just picking up on statistical noise, the researchers also conducted in-person interviews during the 2009 NCAA men's basketball tournament. Fans whose team had just won reported, on-average, more positive views of President Obama than a neutral group. And fans whose teams lost reported more negative ones.

The sports effect may be pretty dramatic. One study of mayoral elections in the US, by Australia National University's Michael Miller, finds that both regular season and playoff performance matters. The better a city's oldest sports team did in its league's regular season and playoffs, Miller found, the higher the mayor's vote share and the more likely the mayor is to be reelected. "According to the model estimate, about 1 in 17 modern major-city elections are decided by variation in sports records," Miller finds, pretty astonishingly.

How could this possibly be true? It's hard to prove, but the theory is that voters can be pretty irrational in some predictable ways. Happy people are more likely vote for incumbents because they feel good about the way things are. When your sports team wins, you're happier. The reverse is true when your team loses.

So, assuming Brazilians are as into the World Cup as Americans are into local sports, some of them may still be depressed about the truly embarrassing Germany defeat come October. That would hurt Roussef's chances.

How much? There's no reliable way to say for sure, but Ames thinks even a minor World Cup effect could force a second round of voting. "I don't think [the effect is] going to be very large," he says. "On the other hand, Dilma's chances of winning in the first round are very close. If she's right on the edge, it could kick people over."

Losing isn't a distraction — and Rousseff needed one

Even if people are over the Germany loss by October, there's another way that it could hurt Rousseff. Many Brazilians see the World Cup as an utter calamity, filled with corruption and wasteful spending. Without a win, there'll be nothing to distract from the coming reckoning after the game and party are over.

Fabiana Velasques de Paula Machado, an economist at the Inter-American Development Bank who studies Brazilian public opinion, thinks Brazilians are primed to be mad about the Cup. "While I don't believe [Rousseff] will be blamed for the loss, it certainly will reignite the debate about corruption and government spending and that could hurt Dilma's prospects," she wrote via email.

Basically, the country spent a ton of money on unnecessary new stadiums. Those stadiums came in mysteriously over-budget by about $1.2 billion — or not so mysteriously, if you build in various corrupt officials' takes. As a consequence, a pretty hefty majority of Brazilians correctly concluded that the World Cup is a waste of money. In a country where critical public services are chronically underfunded, wasting tens of billions of dollars is a huge deal. So big, in fact, that there were massive riots over the Cup in 2013.

"The dire state of public health services (top concern among Brazilians even before the debacle) [and] public education and infrastructure (topics that were at the heart of the protests last year) seem to be gaining salience," Machado said. "In fact, concerns about the World Cup expenditures ranked third in the 'issues' most likely to surface during the campaigns," according to a poll she conducted. 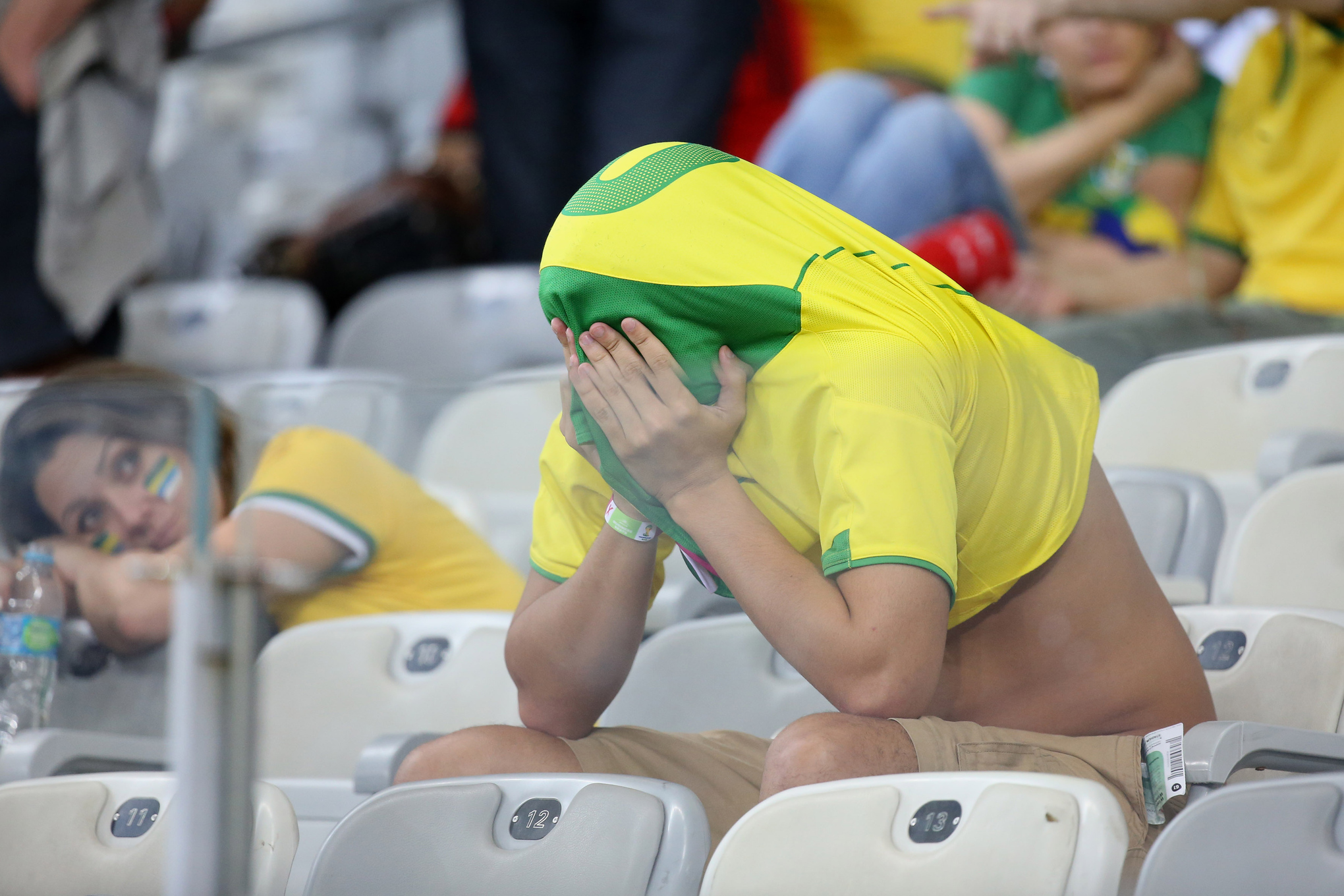 Ames agreed. The Brazilian middle class, he said, "really depends on public services, education and transportation." They're not thrilled with these sectors being underfunded and are furious that the money's being diverted to the Cup.

Indeed, anger about the Cup is a big reason why Rousseff is vulnerable in this cycle. Look at this chart of Rousseff's approval rating over time, as judged by the Folha de São Paulo newspaper's national poll. You'll notice a huge, persistent drop in the number of Brazilians rating Rousseff's performance as good/excellent in June 2013. That's right when the big World Cup protests and riots broke out: 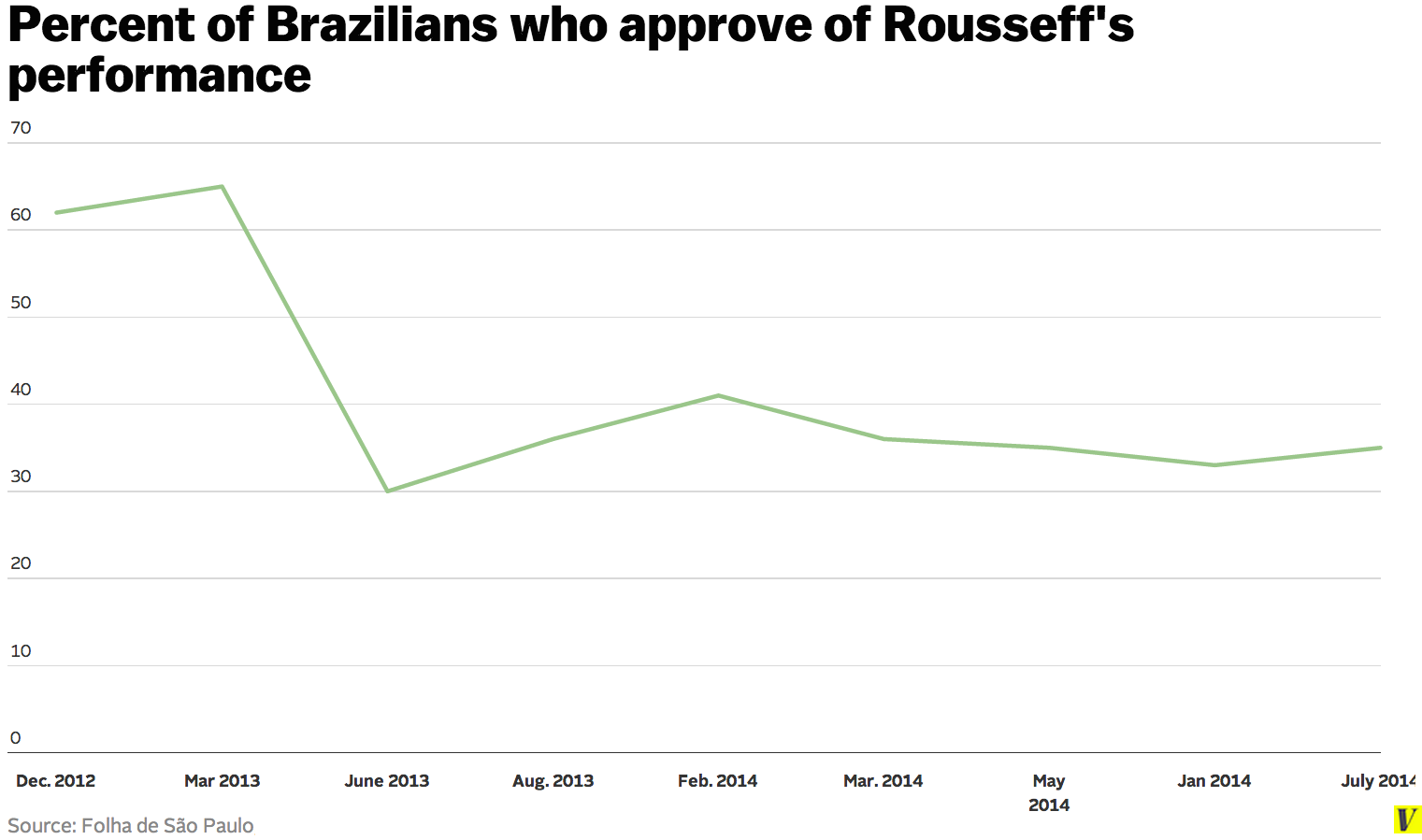 Clearly, the anger surrounding the World Cup is politically potent. Without a Brazil victory to give folks a more positive sense of what happened, Rousseff may be seriously vulnerable on the Cup once the campaign really gets underway.