Immigration reform died because it's become a normal political issue

Share All sharing options for: Immigration reform died because it's become a normal political issue

Comprehensive immigration reform is dead. Dead for the second time in ten years. Most likely, it's been dead for some time. But on June 30 we got official word that the GOP-controlled House won't be holding a vote on the bill the Senate passed last year, and won't be holding a vote on any different immigration reform bills either. Unauthorized migrants living in the United States and hoping for help will have to look to the limited tools available to the White House rather than the more robust options available to the United States Congress.

The specific story of how the drive for reform failed can be made complicated. But it can also be made very simple. Republicans didn't like the idea, and they control the House, so it didn't happen.

Republicans didn't like the idea, and they control the House, so it didn't happen

Which is to say that immigration reform hasn't so much died as become a normal issue in American politics. One party's for it, the other party's against it, so progress depends on unified partisan control of the levers of government.

Immigration used to be special

It used to be an unusual issue.

The last time immigration reform died, it was 2007 and George W. Bush was President. Robert Pear and Carl Hulse underscored the idea that reform was a Bush initiative, saying that he "placed telephone calls to lawmakers throughout the morning, but members of his party abandoned him in droves, with only 12 of the 49 Senate Republicans sticking by him on the key procedural vote that determined the bill's fate." Democrats were more supportive, but nonetheless "nearly one-third of Senate Democrats voted, in effect, to block action on the bill."

Both support for and opposition to the bill, in other words, was bipartisan. And the landscape was sufficiently murky that during the 2008 campaign not only were both Obama and his opponent John McCain officially supporters of reform, but they got into an argument over whether an amendment to the bill that Obama had supported was secretly an effort to scuttle the deal.

The more recent iteration of immigration reform, by contrast, is simple. Democrats are for it — every single Democratic Senator voted yes on the bill that passed the upper house — and now House Republicans have clearly registered that they are against it. Not just against it as individuals, but against it as a party. The GOP is committed to using its authority over the House to block a vote, meaning that whether or not a dissident minority faction of Republicans is supportive of comprehensive reform their vote won't be counted. It's a not-uncommon procedural tactic in the American institutional setup, but it's the very essence of a fully polarized highly partisan issue. 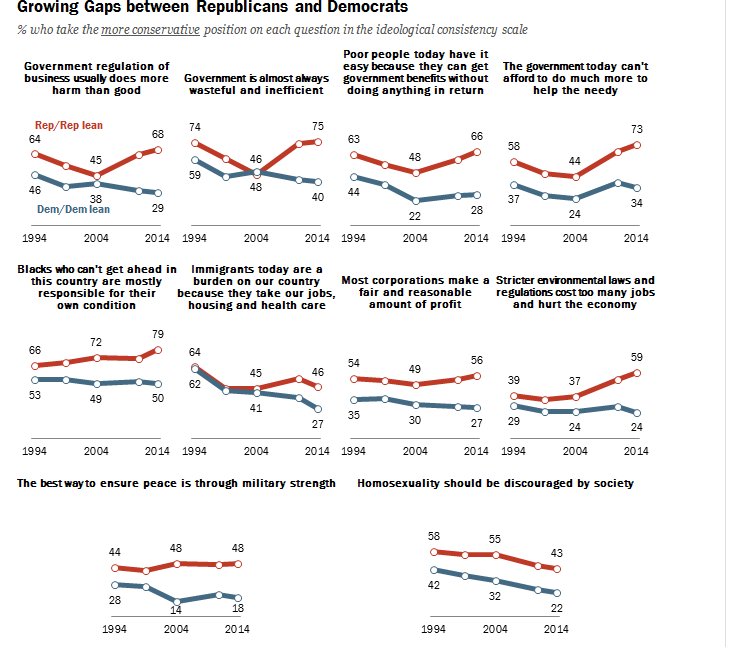 Of course the news that America's parties are becoming better-sorted and its politics more polarized is hardly a surprise at this point. But the fact that among voters there was scarcely any gap at all on immigration 20 or even 10 years ago is striking. The non-polarized public meant that in congress, immigration was essentially an interest-group issue. Latino groups who for other reasons were aligned with Democrats pushed for reform, and so did business groups who primarily aligned with the GOP.

This is why Obama ended up largely leaving immigration on the cutting room floor, to the great disappointment of immigration advocates, during his first two years in office.

Democrats found themselves in possession of large and powerful congressional majorities, and the best use of those majorities was thought to be a focus on highly partisan issues that would unite his partisan coalition. Thus the successful pushes for health care reform and a Wall Street regulation overhaul, and the unsuccessful but very serious push for a climate change bill. Immigration was a topic ideally suited for down the road, at some time when Republicans held more sway and the time would be right for bipartisan dealmaking.

You can see what the White House was thinking. But as is often the case with political leaders, they were already behind the times.

the right time for bipartisan dealmaking is never

At the moment, the right time for bipartisan dealmaking is never. The route to a path to citizenship for unauthorized migrants is now clear — like other liberal priorities it'll happen if Democrats win a sweep election but not otherwise.

The more interesting question is what happens to Republicans. Will they simply cede the faction of the business community that's hungry for immigrant labor to the Democratic coalition? Or will they push harder for a new formula — something like the SKILLS Actthat would allow in more highly-skilled workers in exchange for slamming the door on family reunification for less-skilled (mostly Latin American) migrants even tighter — that would try to split up the existing interest group coalition for reform.

But whatever happens, it won't be special. We'll see continued trench warfare through executive action and judicial decisions as long as the legislative branches are divided. And then when one party or the other gains a breakthrough, some kind of reform will pass largely on a party-line vote.