Everyone does drugs, but only minorities are punished for it

Share All sharing options for: Everyone does drugs, but only minorities are punished for it

Since its inception, the war on drugs has disproportionately affected minority Americans far more than white Americans.

To some extent, the racial disparity speaks to the overall inequality in the US criminal justice system. But it's also true minorities fall victim to tactics specifically deployed in the war on drugs much more often than white people. Here are four essential facts to understanding how, exactly, the war on drugs disproportionately hurts minorities.

1) Black and white populations use drugs at similar rates 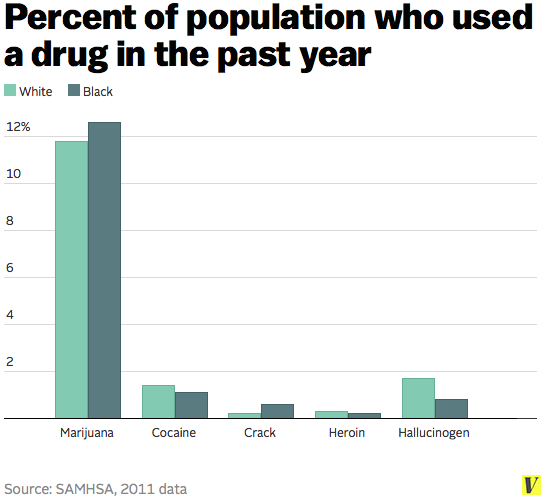 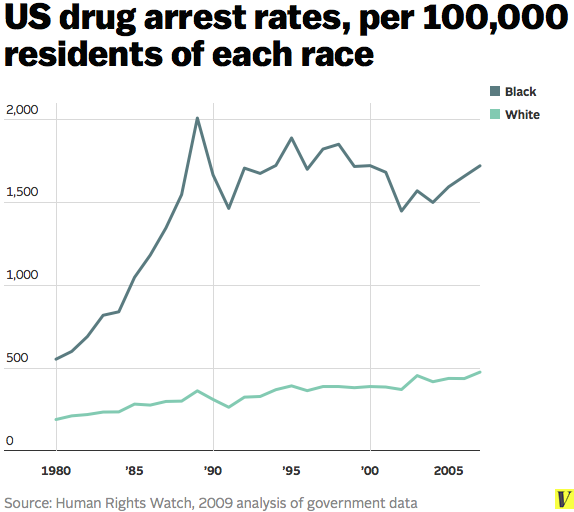 Human Rights Watch found more than four in five arrests in the war on drugs are for mere possession, while the rest are for sales. That suggests police are targeting drug users, not traffickers.

A common defense for these types of statistics is that drug charges are often used to lock people up for other crimes. As Vox's Dara Lind wrote, "One theory for this: In many cases, police have used drug crime as a proxy for violent crime. It's much easier for a prosecutor to guarantee a conviction on a drug charge — where there's physical evidence that the defendant had drugs — than on a violent charge, where proving what happened is more complicated. And police target drug enforcement in high-violence neighborhoods, which are overwhelmingly black and Latino."

Whatever the intention, the disproportionate arrests and incarceration rates — supposedly for violent crimes that can't even be proven in court — have clearly detrimental effects on minority communities. A study published in the journal Sociological Science found boys with imprisoned fathers are much less likely to possess the behavioral skills needed to succeed in school by the age of five, starting them on a vicious path known as the school-to-prison pipeline.

Mandatory minimum sentences were established in the 1980s when politicians touted the so-called crack epidemic to show off tough-on-crime stances. But these sentences are set in a way that could target black drug offenders more than white drug offenders. 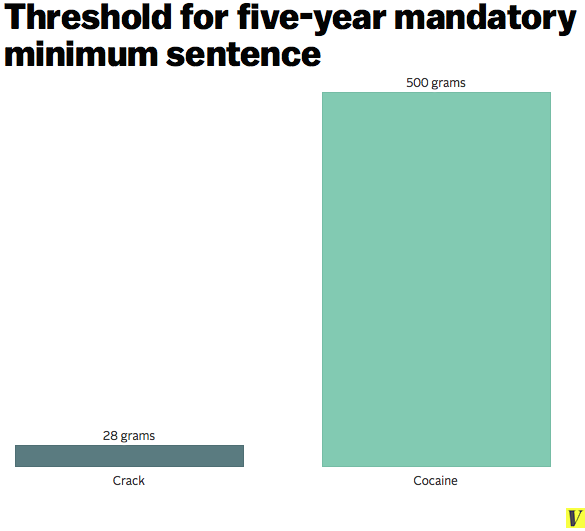 Crack and cocaine are pharmacologically identical drugs. The difference is crack is mostly smoked, while cocaine is traditionally snorted. Smoking can make the effect more potent, faster acting, and potentially unhealthier, but both drugs essentially have the same effects in the long-term.

SWAT raids are much more common in black neighborhoods than white neighborhoods, according to a new report from the American Civil Liberties Union.

As one example, the ACLU mapped SWAT raids in Cincinnati between 2010 and 2013. The black neighborhoods are sometimes fully covered in red dots, while some white neighborhoods have no dots at all: 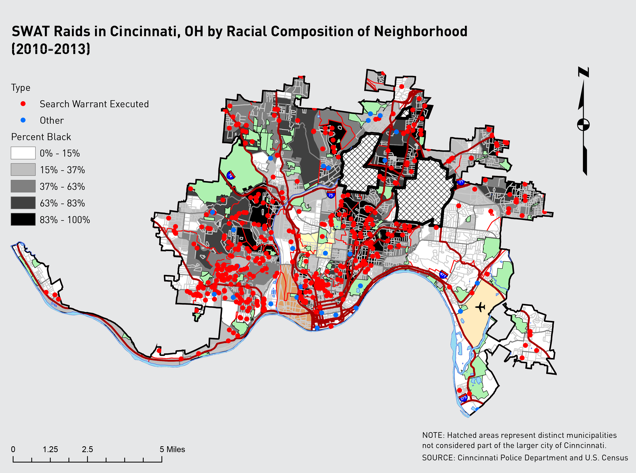 The ACLU found that 62 percent of SWAT raids are used for drug searches, and drug-related SWAT deployments primarily impacted people of color. Combined, the statistics suggest enforcement in the war on drugs hits black people — and their neighborhoods — the hardest.