Here's why the ammunition shortage went on for years

Share All sharing options for: Here's why the ammunition shortage went on for years

America's shooters have had around five years of trouble finding enough bullets for their guns. In the years after President Obama's 2008 election, then again after the 2012 Sandy Hook shooting, with barely a lull in between, big-spending gun aficionados left manufacturers struggling to keep shelves full. Now, the shortage seems to be winding down.

Demand has remained high since 2008, in part because some gun owners, frightened that Obama would tighten gun control laws, went into panic mode. But that's only one side of it. The problem is that supply never seemed to quite meet that demand. And that's in part because even though they haven't said so, skittish manufacturers don't believe the panic will last long enough to make it worth the investment in costly new factories.

It's a bit of a misnomer to call this one singular shortage — different calibers have been in short supply in different parts of the US over the last few years. Most recently, Alaskan shooters have had trouble finding certain types of ammunition.

But beyond counting up the anecdotal evidence, measuring demand for ammunition is a tricky business. One source is tax data. The government imposes an 11 percent excise tax on ammunition, and revenues from that tax have picked up in recent years, hitting an all-time high just a few months into 2013, as the Atlantic Wire reported last year.

The Labor Department doesn't measure price index for bullets the same way it measures one for most other goods, like textbooks or furniture or beef. But it appears that both the price of bullets and the volume of bullets sold has increased — meaning rising profits for ammunition makers. According to market research firm IBISWorld, guns and ammunition industry revenues grew on average a projected 8.4 percent annually from 2008 to 2013. Ironically, the election of a president who favors gun regulation has been good news for the industry.

Whatever the numbers might be, there's plenty of evidence that ammunition demand has been unusually high. According to one ammunition manufacturer, the shortage situation has been in effect nearly every year since September 11.

"Our company has been in a backorder situation since 9/11. There's only been one year since 9/11 where we haven't been working overtime," says Kristi Hoffman, co-owner of Black Hills Ammunition in Rapid City, South Dakota.

Gun manufacturing also picked up strongly over that period. 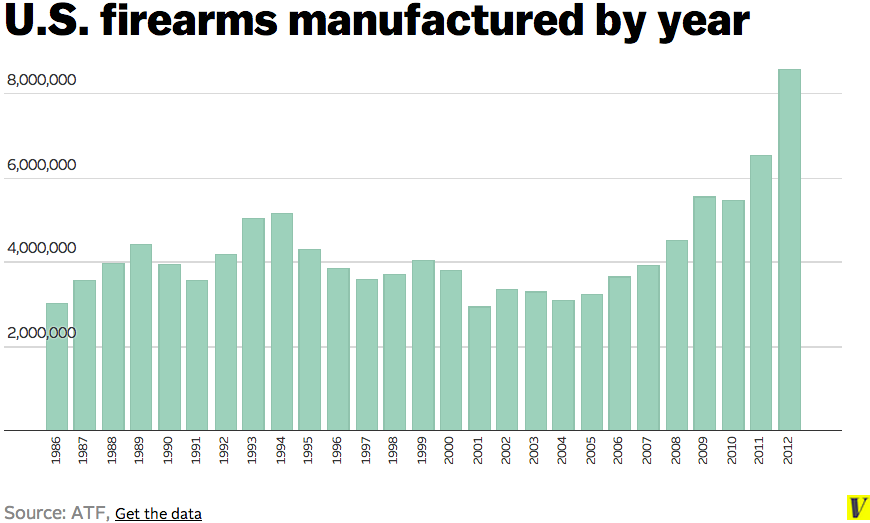 And those are just the guns made in the US. Imports of guns have also spiked in recent years.

Clearly the gun business has grown. But answering exactly why is much more difficult.

The industry itself argues that interest in shooting has picked up. The National Shooting Sports Foundation found in a 2013 survey of retailers that nearly 26 percent of firearm buyers in 2012 were new buyers, up from around 20 percent tin 2010. Retailers also reported more women were coming into their stores for the third straight year. 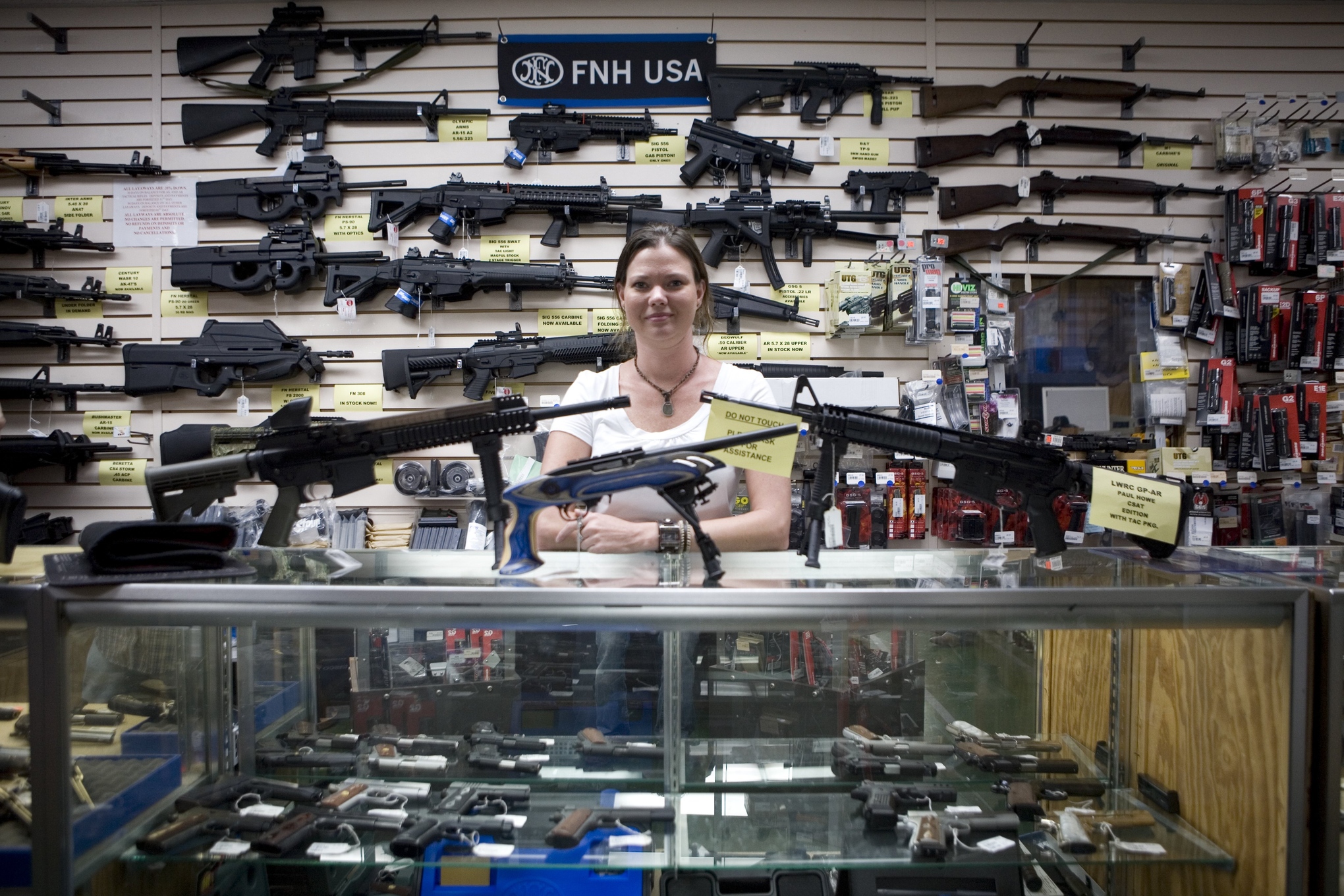 "The shooting community has shifted to a younger audience. It's no longer an old white guy club. It's young people who realize the sport of shooting, the entertainment value of it," says Tim Shoopman, manager of HH Shooting Sports in Oklahoma City.

That may be true, but the statistics also indicate that many gun owners are simply stocking up. During that 1986-2012 period in which gun sales wavered, then climbed dramatically, the share of Americans who reported owning a gun either plummeted or held steady, depending on which survey data you look at. 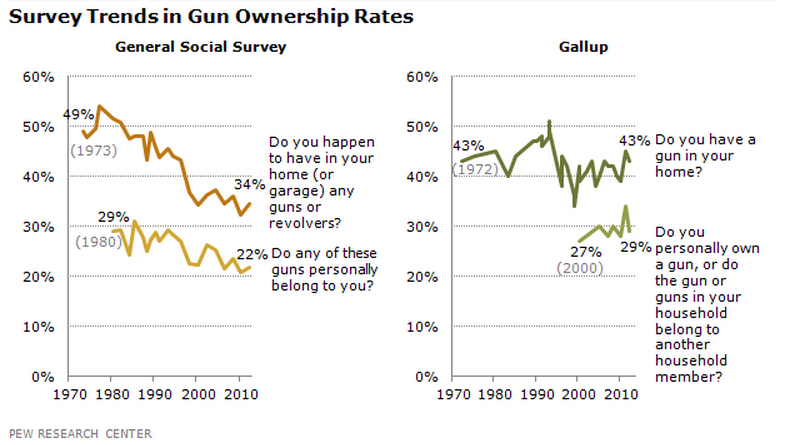 That suggests that some homes are buying multiple guns, rather than the market being flooded by new buyers. If that's true, it might support the hypothesis that ammunition sales are climbing because certain people are stocking up on bullets or are panic-buying.

That stockpiling is in large part politically driven. A 2009 Gallup survey found that more than half of gun owners thought Obama would ban the sale of guns while he was in office, along with 41 percent of all Americans. And shootings like those in Sandy Hook or Aurora, Colorado, have also been shown to boost interest in guns.

Why shelves didn't get restocked

Clearly, there's demand for more bullets. So why haven't manufacturers expanded to meet that demand? Leaving aside conspiracy theories about massive DHS bullet purchases (which even pro-gun Breitbart.com found to be untrue), the answer seems to be that manufacturers know it's not just new interest in sport-shooting that's driving the ammo-buying. The gun industry has acknowledged that politics drive gun-buying.

Knowing that, manufacturers are reluctant to invest in lots of expensive new facilities when they're afraid the political mania could vanish at any moment. But as Guns and Ammo reported last year, America's ammunition manufacturers have been operating at or near capacity for a decade, and reluctant to boost that capacity. And that capacity is finally starting to creep upward — Remington finally last year broke ground on a new ammunition plant in Arkansas.

To be clear, ammunition manufacturers have picked up their manufacturing to some extent. That pickup is helping the shortage to finally ease a bit now, nearly six years after that initial 2008 surge, says Shoopman.

"BACK IN THE EARLY '90S WE SAW A GENERAL ELECTION WHERE THE REPUBLICANS TOOK CONTROL OF CONGRESS, AND ALL OF A SUDDEN THE PANIC BUYING STOPPED IMMEDIATELY"

"We've seen it getting a lot better than it was," he says. "I'd say we're getting more supplies in from the manufacturers. ... They're running three shifts, seven days a week."

Major ammunition makers Hornady and ATK referred Vox to the National Shooting Sports Foundation, which says through a spokesman that makers have "ramped up production over the last several years."

Likewise, a Winchester spokesman says, "We are working as hard as we can to produce an increased supply of quality ammunition to meet our customers' needs."

That increased supply clearly has often been insufficient to keep up with demand. And one major reason, says Dionisio, is that manufacturing ammunition is capital-intensive. You don't just need a lot of new workers to boost production; you need new, expensive machinery. The prospect of that sort of an investment can make some firms skittish about expanding, because gun and ammunition purchases shift so quickly with political winds.

Hoffman agrees with that, saying that many companies will only expand as far as their current workers and machinery will take them.

"Beyond that, you have to say, 'How is my crystal ball here? Is this going to go on for the next 10 years so I can hire more people, I can build on to my facility? or is this going to be done in 6 months or 18 months?" says Hoffman. "Typically in our industry what people do — like us — you run as hard as you can with the people you have."

Tacking on more people or more machines can be a recipe for layoffs or financial losses. When politics change, so do buying habits.

"Back in the early 90s we saw a general election where the Republicans took control of Congress, and all of a sudden all the panic buying stopped immediately," she says, speaking of the 1994 midterm election, just after the Brady gun control bill passed. "We went from full bore to nothing."

Depending on what happens in this year's midterms and in 2016, says Hoffman, gun owners could once again relax about their second-amendment rights, easing up the pressure both on her and on other manufacturers.

As for the easing shortage right now, sellers like Shoopman are happy they finally have some relief.

"Of course we would have liked it sooner," says Shoopman. "But we understand that when you have a giant swimming pool and suddenly it's empty and you just have one garden hose trying to fill it back up, it's not going to go very fast."