These 3 charts show that Europe needs to quit austerity

Share All sharing options for: These 3 charts show that Europe needs to quit austerity

Just a few years back, European countries were wracked by skyrocketing government borrowing costs. Today, however, a mix of timely European Central Bank action to address the debt crisis and continued economic stagnation have created the opposite situation — very low interest rates. In some cases the lowest we've seen in centuries. Jim Reid at Deutsche Bank pulled the historical records and here's what he found.

French borrowing costs have never been this low, dating back to Louis XV's time in the mid-18th century: 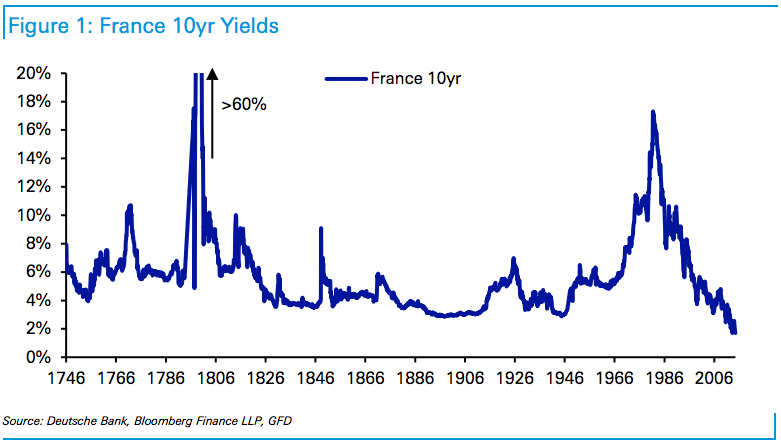 For Spain, he has data going all the way back to the French Revolution and finds that government borrowing has never been this cheap: 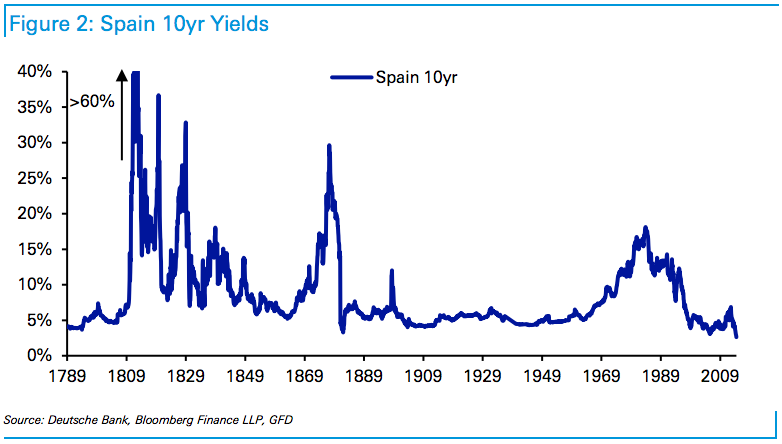 Italy as a country dates back to the 1860s, but Reid assembled bond data for some of the Italian precursor states going back to 1808 and finds that there was just one period of a few months back in 1945 when interest rates were lower: 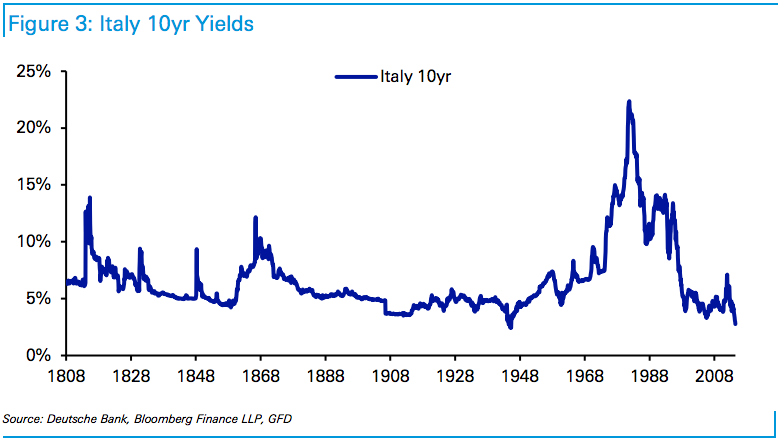 So why is this happening?

Well a lot of it has to do with inflation. These interest rates are all nominal interest rates, meaning they're not adjusted for inflation. You can see that every country saw its interest rates rise sharply in the 1970s when inflation rates were high, because lenders demand compensation for inflation risk. Since the early 1980s, inflation has trended downwards. And right now eurozone inflation is very low indeed. Add to that the fact that the European Central Bank is now clearly backstopping the government debt of its member states, and lending to the Italian government looks like a very low risk endeavor.

Then the other part of the story is a poor growth outlook. Government borrowing costs are in part a measure of perceived risk, but also in part a measure of where the other perceived opportunities are. Right now, nobody wants to invest in the Spanish or Italian or French private sectors. The economic outlook is just too bad. When nobody wants to invest in the private sector, you get a glut of money chasing very safe government bonds which pushes rates down.

Normally one would say this combination — ultra-low interest rates and a depressed economy — is a great time for fiscal stimulus. Why not slash taxes and invest in public works to get people working again? But remember that part of what underlies these low interest rates is implicit guarantees from the ECB. And the ECB, like the other main institutions of Europe, is deeply wedded to austerity policies. A country that tried to buck the austerity trend would risk the wrath of the ECB, and thereby lose the chance to do stimulus. Once again, Europe looks stuck.