The homepage is dead! We’re building one anyway.

Share All sharing options for: The homepage is dead! We’re building one anyway.

A few weeks ago, a grainy, black-and-white graph made the rounds on media sites and gave rise to a favorite digital media refrain: the homepage is dying, dead, breathing its last gasp, or in some other state of imminent doom (early sightings of the refrain harken back to at least 2005).

The graph had been scanned from the New York Times’ Innovation report and it shows how much the traffic to NYTimes.com declined between 2011 and 2013 — nearly by half, from a high of 160 million visitors to 60 million visitors. 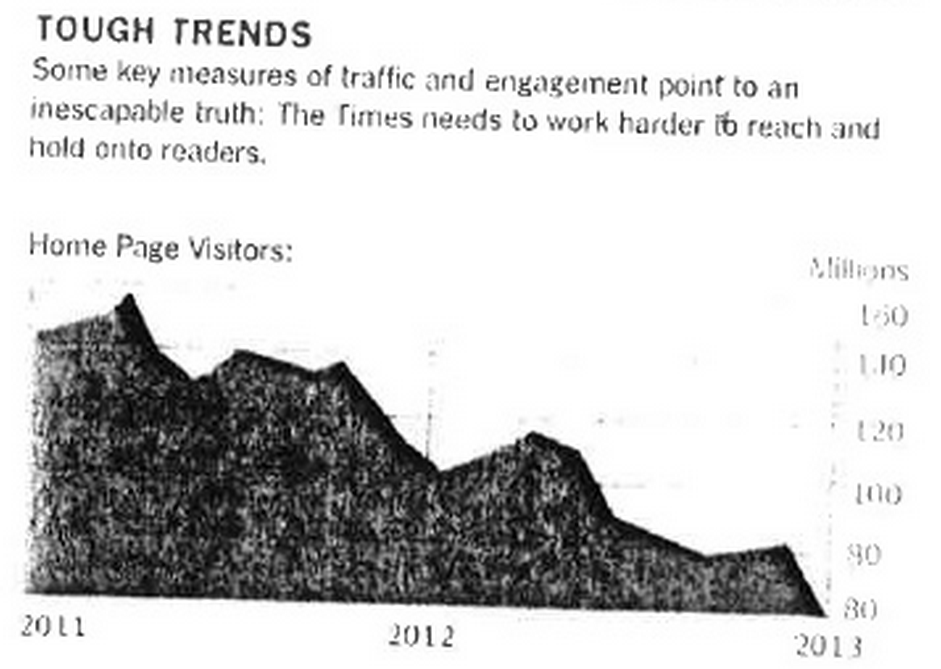 From the New York Times Innovation Report, via Buzzfeed.

It's a similar story with other landing pages, particularly in the journalism sphere, and the collective internet hive mind most often blames social media for the decline, though there are plenty of suspects. Facebook may be the cause, or it’s possibly Google, or maybe it’s your mobile phone’s home screen. Or, as journalism professor Jeff Jarvis has long contended, the article page is now the new homepage.

Whatever the new homepage is, and despite the warnings in that grainy graph, we still want one.

When we launched Vox, we built it on the same code base as SB Nation, the sports site in our Vox Media family. We did this to save time and get our site up and running in just nine weeks. To develop and design a different homepage that works across multiple platforms, and with all sorts of content would have taken much, much longer.

If you go check out SB Nation, you’ll see similarities in structure to Vox’s current homepage, though we invested time in a whole new look and feel (and our designers pulled it off; letting the two sites feel wholly independent despite the shared backbone).

It's a good design, but we can ride on our sporting compatriots' coattails for only so long. It’s time to start on our own homepage. We’ve got some good ideas cooking, but I asked to hear yours. I’ll prattle on a bit more about some of what I’m thinking about our homepage, but you can skip my thoughts and jump down to the comments to see what other readers recommended.

As a reward for sticking around, here's some more homepage thoughts. This project is not so much about making some beautiful design that pulls in readers (though that’s always nice). But I already think we have that. I love the impact of our single story view when there's major breaking news, as seen in the photo above when the scandal at the VA was unfolding.

But we have a problem with the lack of organization on the site. Readers come to Vox and have plenty of places to go, but not a lot of guidance on where and how to get there.

That’s on purpose. I made a decision during our fast launch to not add many organizational cues to our site. There would be no navigation bar, like you see on many news sites; there are no set sections; and there are very few "breadcrumbs," which is digital-speak for clickable items that lead readers to similar content on websites.

I did this for two reasons. One, to save time. The mere hint of organizing principles can send media folk into long, philosophical debates about word choice and metadata necessities. These conversations spiral into meetings that end in the same place they started, only everyone is a little more frustrated. I thought it would be better to save those conversations until after we had the site up and running.

The second reason was this: we did not want to impose order on theories alone. We had ideas about the topics we’d be covering. We hired one of the best higher education reporters in the country. We found a rising star on the immigration beat. But this entire endeavor was new to all of us. What if, when we started publishing, it turned out our immigration reporter shone at Shakespeare analysis and our education reporter asked to switch to the birthday beat?

We agreed to wait to see what we would be organizing before we set about organizing it. Two months in, we have some answers. Now we just need to figure out how to go about doing it.

Since the homepage is really for you the reader, I opened the comments for a few hours to hear what you think. I wanted to know why folks go to a homepage? To scan the news? To see the newest things that have been published? Or something else entirely? Readers offered up a bunch of great suggestions and thoughts. If I shut the comments down before you could make one, but you want to add your thoughts to the homepage discussion, feel free to email me at editors@vox.com. Thanks!

Correction: Joshua Benton from Nieman Labs points out the Y-axis is mislabeled on the New York Times' graph. The number is actually 60 million, an even worse decline than I previously wrote...

How we make Vox