President Obama is proposing two plans today to make the burden of student debt a little lighter for some borrowers.

He will expand a program that lowers student loan payments to 10 percent of borrowers' monthly discretionary income. And he will call on Congress to pass a proposal from Senator Elizabeth Warren to allow some borrowers to refinance their loans, whether those loans were made by banks or the federal government.

Both proposals, reported by the New York Times and confirmed by a White House official, would lower monthly payments for some student loan borrowers with high debts and low incomes. That means both plans would be more costly for the government and private banks.

Obama is taking these steps in part because of worries that student debt is holding back the economic recovery, particularly the housing market. Young adults with college debt are less likely to buy houses than young adults without student loans: 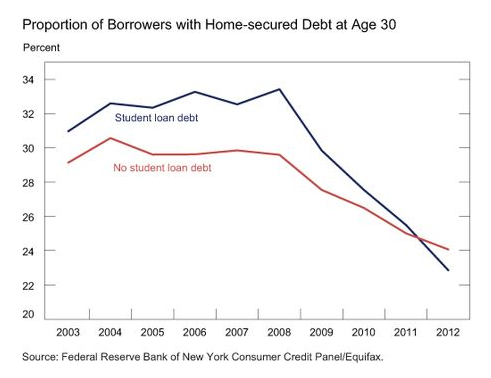 Student debt is also a pressing issue for younger voters, and the president and Senate Democrats hope it will spur them to vote in the November midterms.

But whether motivated by politics, economics, or both, the president's plan also springs from an inconvenient truth of higher education policy: It's easier for lawmakers to deal with student debt after the fact than it is for for them to make college more affordable up front.

What Obama can do on his own: Lowering some borrowers' monthly student loan payments

The plan: The president is proposing lowering some borrowers' monthly student loan bills by expanding a program that bases student loan payment amounts on borrowers' discretionary income. The plan, called Pay As You Earn, offers lower payments for borrowers with low incomes than the traditional 10-year loan repayment plan. Borrowers pay for 20 years or until they've paid off the balance, whichever comes first. People working for a nonprofit or for local, state or federal governments are done making payments after 10 years, whether they've paid back the loan or not.

Only about 200,000 borrowers, of 17.5 million people paying back student loans, are using Pay As You Earn. Obama is proposing making an additional 5 million borrowers with older loans eligible to participate, though so far only a small fraction of eligible borrowers are taking part.

The bigger the program gets, the more likely it is that lawmakers will eventually cut back its benefits

The hurdles: Obama will sign an executive order on Pay As You Earn, but the expansion requires the Education Department to change its regulations. Because of this, a White House official told the New York Times that the expanded repayment program won't be available until the end of 2015 at the earliest.

Even then, it's not clear how many people will take the federal government up on the offer. Enrollment rates in income-based repayment plans have increased after an Education Department outreach blitz, but far more people are eligible than are enrolled. The expansion will only apply to borrowers who took out loans directly from the Education Department, while many borrowers who took out federal loans before 2007 went through banks such as Sallie Mae.

Some members of Congress are also leery of Pay As You Earn because it's not clear how much income the government will eventually lose from the program. President Obama nodded to those concerns in his most recent budget proposal, asking Congress to make Pay As You Earn less generous for graduate students. The bigger the program gets, the more likely it is that lawmakers will eventually cut back its benefits.

The plan: Obama will also urge Congress to pass a bill proposed by Senate Democrats and spearheaded by Sen. Elizabeth Warren (D-MA) to let some borrowers refinance their loans at lower interest rates.

House Republicans are not going to support this bill

The hurdles: House Republicans are not going to support this bill, which would make up the money the government would lose on student loan interest by raising taxes on some investment income. (Senate Democrats have proposed paying for a range of progressive priorities this way.)

It's not just the federal government who would lose money. Warren's refinancing bill would extend to private student loans as well. The federal government would buy those loans from banks, and students would make payments at a lower rate to the government instead. Because private student loan interest rates are typically higher than federal loan interest rates, this would be a great deal for borrowers, but it also means that banks have good reason to oppose the measure.

College affordability is a complex issue that goes far beyond loan interest rates and repayment plans. So why does Congress focus on student loans rather than on making college cheaper up front?

Partly because a significant percentage of student loan borrowers really are struggling — and until recently, Congress hasn't paid much attention to borrowers who are already out of college. Eleven percent of the outstanding student loan balance is at least 90 days delinquent, according to the Federal Reserve Bank of New York. Some of those borrowers might already be eligible for programs to lower their monthly payments and just aren't taking advantage of them. But others would benefit from flexible repayment plans and lower interest rates Obama wants to give them. 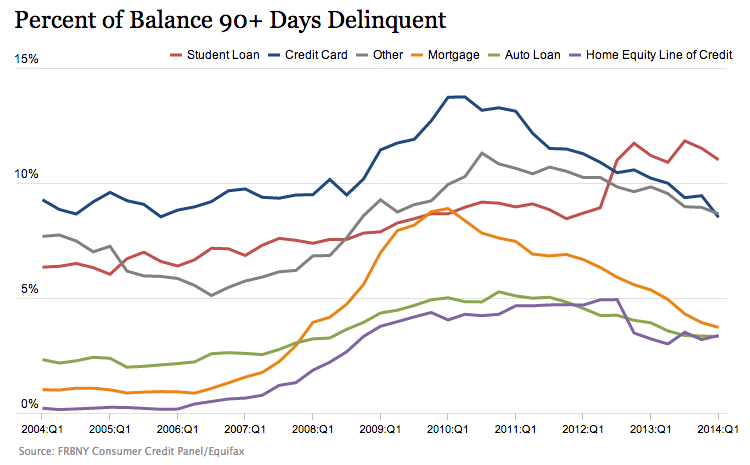 Still, Congress could take other steps to make it less likely that students need to take out loans in the first place. They could increase spending on grants for low-income students — but that could cost tens of billions of dollars per year.

Congress could also use the $150 billion spent per year on student grants and loans to force colleges or states to make changes to tuition policies.

A decade ago, two House Republicans, including now-Speaker John Boehner, proposed cutting off financial aid at colleges that increase tuition too rapidly. Colleges strongly opposed the specter of federal price controls; Democrats refused to get on board; and the idea went nowhere. When President Obama proposed an updated version of the same idea, suggesting that Congress should some federal financial aid to reward colleges that offer good value and punish colleges that don't, even Democrats left the idea out of their budget proposals.

That leaves student loans as the remaining tool in Congress's college affordability toolbox. Unlike grants, they're a moneymaker for the federal government under current accounting rules. And they're less thorny politically because the vast majority of student loans already come from the Education Department. There aren't other interests — like banks and colleges — to be taken into account when changing policy.

Student loans aren't the only lever Congress has over higher education policy. They're just by far the easiest one to pull, and so lawmakers return to it again and again.