The Dutch are drinking a ridiculous amount of coffee

Share All sharing options for: The Dutch are drinking a ridiculous amount of coffee

If drinking coffee were a sport, then team America is losing. Quartz recently did an analysis on where the world's biggest coffee drinkers are, and the Netherlands came out on top, followed by Finland, Sweden and Denmark. The Dutch are drinking about 2.5 times as much coffee as people in the US are.

As far as nations go, the ones drinking the most coffee are somewhat cold and dark, where (usually served) warm stimulants may be more attractive than a Coke on ice.

Quartz notes that the cups it used above are 8-ounce cup equivalents. That's smaller than most small cups in the US. The standard small at McDonalds and at Starbucks (called "tall") is 12 ounces. (Starbucks apparently also has something called a "short" that is 8 ounces, although I've never met that one in the flesh.) A Dunkin' Donuts small is 10 ounces.

Also, this is a per capita analysis, not per coffee drinker. So after all those children are factored in, this might be more coffee than it looks like.

I also looked at recent data from the International Coffee Organization, which publishes consumption for a select group of countries based on coffee beans imported and exported. The results were a bit different: 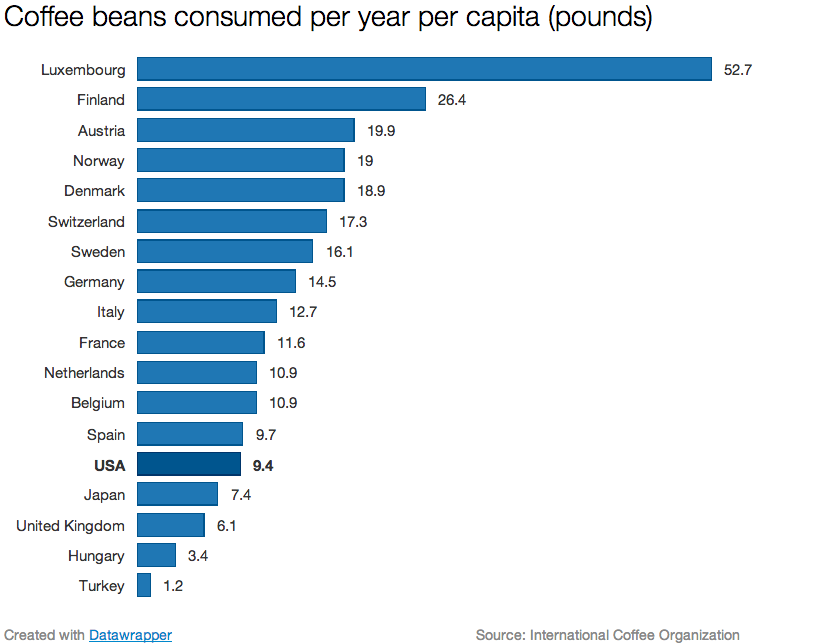 It shows a somewhat similar pattern, with Finland, Denmark, and Sweden near the top. However, the Netherlands is way down by France.

(And something weird seemed to happen in the data set with the tiny nation of Luxembourg, a country not included in Quartz' analysis. A lot of previous analyses of coffee consumption lump Luxembourg together with Belgium. It's possible that something odd is happening with the numbers because Luxembourg has such a small population — only about 500,000 people live there.)

So, the US  might have about 13,000 Starbucks, but it's definitely not drinking the most coffee per person.