Rand Paul tries to show he's presidential, but ends up showing one reason he's not

Share All sharing options for: Rand Paul tries to show he's presidential, but ends up showing one reason he's not

Senator Rand Paul faces two chief obstacles in his effort to win the 2016 GOP presidential nomination. First, Republican elites are concerned that his positions don't fit with the GOP platform, particularly on foreign policy. Second, those same elites worry about his prospects in a general election, as I wrote in April. So this past weekend, Paul rolled out several efforts intended to help assuage those concerns. Yet he may have overshadowed them all by making one controversial joke.

"why don't we set up a trade. but This time, instead of five Taliban, how about five Democrats?"

Paul's original agenda for the weekend was evident in this article by Politico's Mike Allen, where the senator speaks extensively about his future plans. To solve the concerns about his platform, Paul would soon give "a major foreign policy address that will give him a prime chance to close a gap with establishment Republicans," Allen writes. To help his electability, Paul announced plans to reach out to African-American and young voters, telling Allen he'd help open a "GOP engagement office" in the West End of Louisville. And on Saturday, he made the case that "A Chamber of Commerce Republican is not going to win a national election," and that it's instead time for a "libertarian moment," reports Politico's Katie Glueck.

But the headline news from Paul's weekend instead ended up being a joke he made at the Texas Republican convention. After mentioning a US Marine arrested for bringing guns into Mexico, Paul said: "Mr. President, you love to trade people, so why don't we set up a trade. But this time instead of five Taliban, how about five Democrats? I'm thinking John Kerry, Hillary Clinton, Nancy Pelosi. Couldn't we send them to Mexico?"

It's a silly, red-meat joke — but one more suited for talk radio or fringe candidates than a presidential hopeful. Paul's staff, however, was apparently proud of it, since it was quickly tweeted from the senator's account: 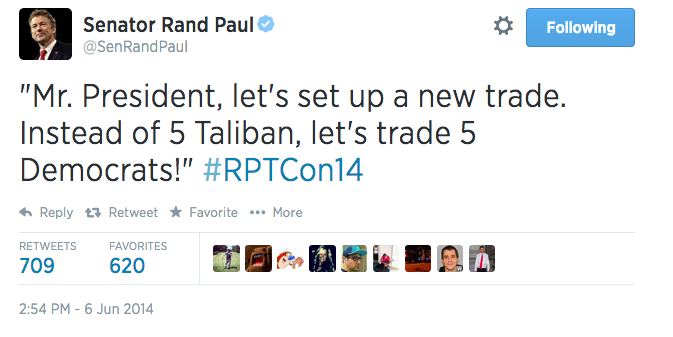 The Politico piece reporting on Paul's joke has been shared 30,000 times on Facebook, so it seems that senator's outreach to Democratic-leaning voters — and his efforts to assure GOP elites that he's electable — may have gone a bit differently than he'd hoped. It's certainly difficult to imagine a "Chamber of Commerce" Republican making a joke like that. Perhaps that's why they tend to win the nomination.