Share All sharing options for: 7 things the most-highlighted Kindle passages tell us about American readers

Conventionally, the most common way of gauging the most popular books in America has been looking at the New York Times' bestsellers list.

When you read on a Kindle, you can highlight passages, the same way you might highlight text in a physical book. The passages you highlight are all collected in one place, accessible either on the reader or a computer.

But Amazon also collects data on what its readers highlight most. The resulting most-highlighted lists are a fascinating record of reading as a whole.

There are some limitations to the data: it's only for people who read on Kindles, and use them for highlighting. The data is extremely heavily skewed towards American readers (Amazon isn't saying whether they include international data, but it looks like they don't). And some books don't lend themselves to highlighting quite as much, which is why many of even Amazon's bestsellers don't appear on the lists.

But it's also true that some books get bought and end up on bestseller lists, but aren't actually read — whereas these lists are a terrific record of what we might nowadays call reader engagement. They reveal not just what books are read, but what part of books are read — and even tell us a little about what people are thinking about as they do their highlighting.

Here are seven things the lists tell us about Americans reading today. 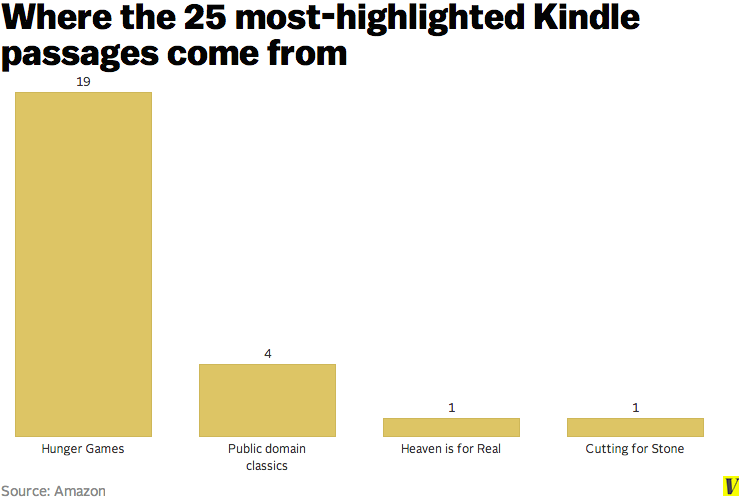 Of the top 25 most-highlighted passages ever, a ridiculous 19 come from one of the books in the Hunger Games trilogy, including numbers 1, 3, 4, 5, and 6. Additionally, the three books rank as 3, 8, and 13 in the list of most-highlighted books of all time.

Part of this is simply due to the fact that Kindles have only become widely-used over the past few years, and The Hunger Games has been the most popular series during that time. The books are also entirely free to anyone with an Amazon Prime account.

The books rank as the 3rd, 8th, and 13th most highlighted of all time

But their dominance in the rankings is still pretty amazing. The single most-highlighted passage, from Catching Fire ("Because sometimes things happen to people and they’re not equipped to deal with them.") was highlighted by 17784 Kindle users. No other passage from any book has gotten more than 9260 highlights.

Some of the 19 Hunger Games passages in the top 25 are important plot points, or are perhaps a little inspiring. But many are clearly there because they tap into adolescent ideas of romance.

The fifth-most highlighted passage of Kindle text of all time, for instance, highlighted by 8,500 readers, is 'I just want to spend every possible minute of the rest of my life with you,' Peeta replies."

2) The Bible is also extremely popular on Kindle 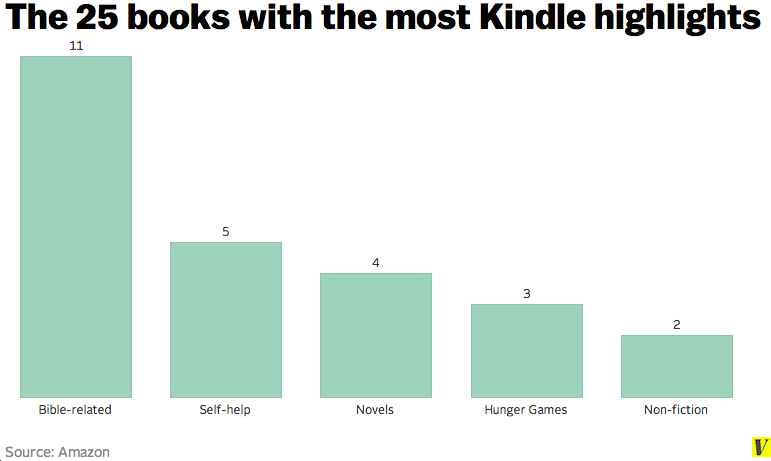 It might not be a huge shock that the Bible is the single most highlighted Kindle book of all time. But it may be a surprise that it's also number 4, 6, 11, 16, and 18 — because different versions of it are listed separately. In addition to the six Bible versions, there are five other Christianity-oriented books in the top 25 most-highlighted books of all time.

three of the bible versions share the same most-highlighted verse

This is mostly because millions of people read the Bible. But there's also the additional factor that faith-related books are the kind that many people like to highlight and return to particular passages in — more than, perhaps, a novel.

"Do not be anxious about anything, but in everything by prayer and supplication with thanksgiving let your requests be made known to God. And the peace of God, which surpasses all understanding, will guard your hearts and your minds in Christ Jesus." 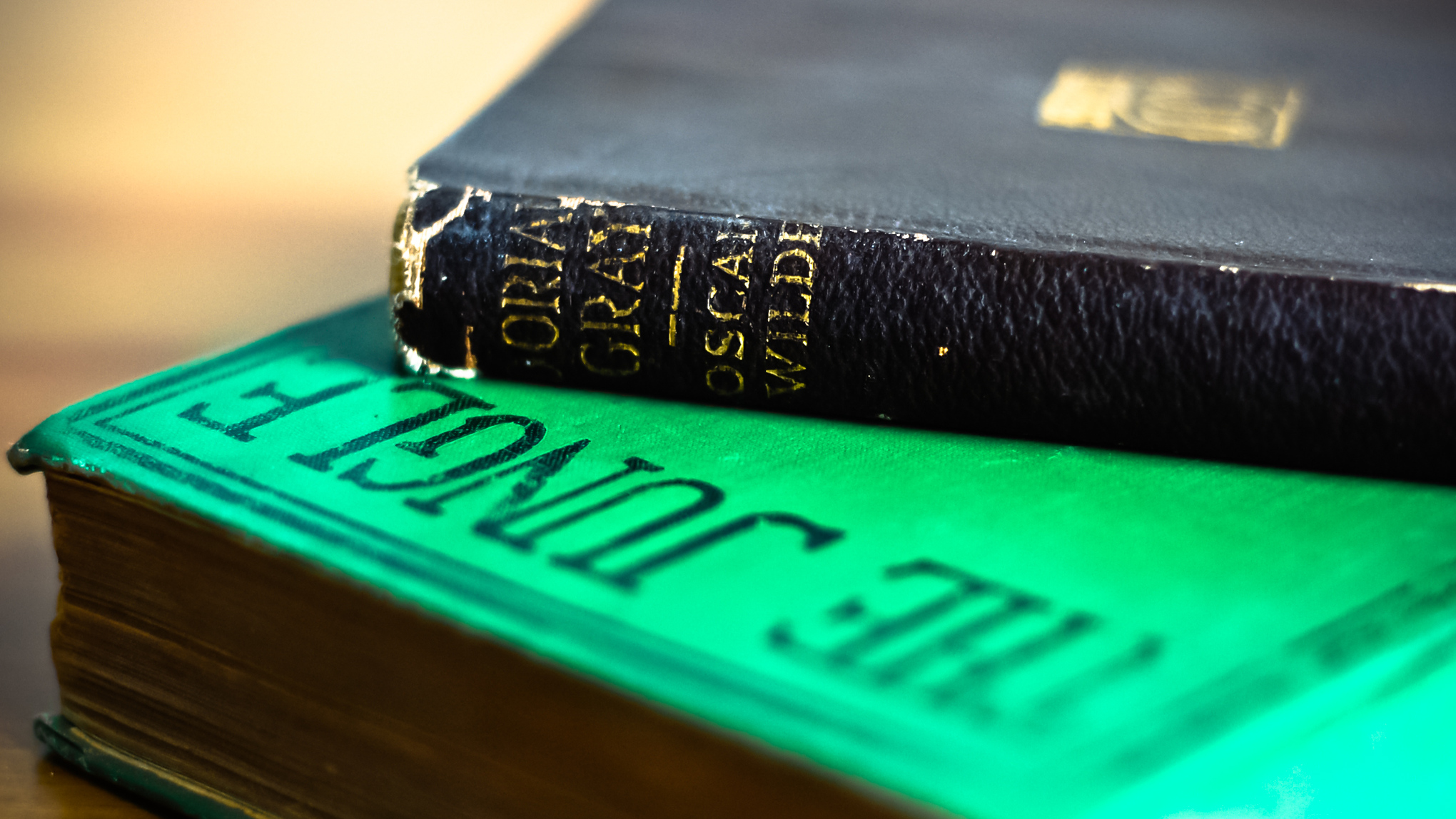 If you own a Kindle, many books published before 1923 are entirely free because they're in the public domain. And if the the rankings are any indication, this leads many digital readers to pick them up anew and start highlighting.

pride and prejudice's most highlighted line is its first

Apart from the Hunger Games trilogy, classics like Pride and Prejudice and The Picture of Dorian Gray are almost the only other books to crack the top 25 most-highlighted passages.

At the same time, it's not clear that readers are getting all that far into them. Pride and Prejudice's most-highlighted line is the very first one in the book:

"It is a truth universally acknowledged, that a single man in possession of a good fortune, must be in want of a wife."

The Picture of Dorian Gray's comes from its first chapter too:

4) Readers want to be told what to do 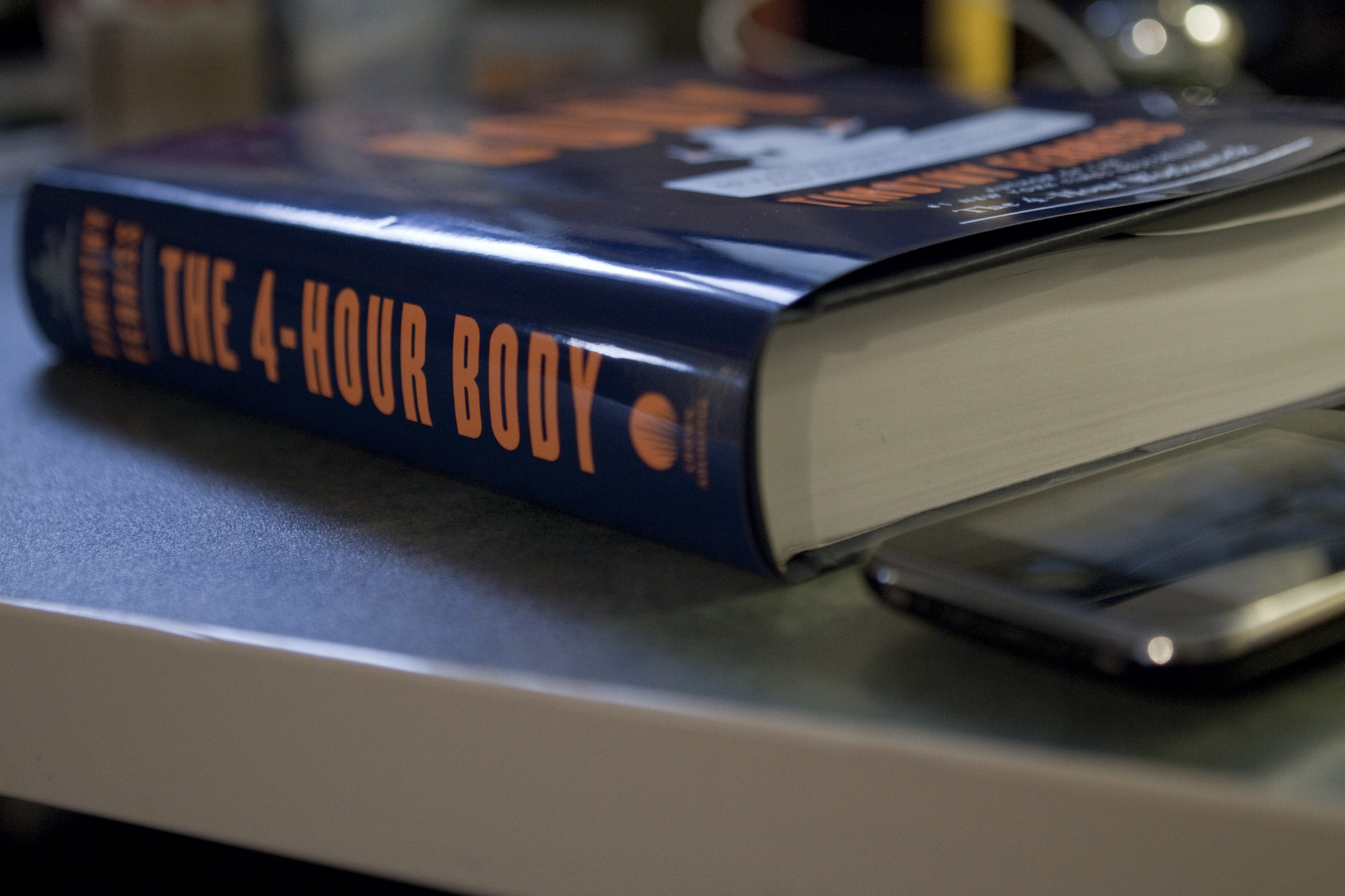 Self-help books are plentiful in the top-25 — it includes The 7 Habits of Highly Effective People, The 4-Hour Body, The 4-Hour Work Week, and How To Win Friends and Influence People.

Like with the Bible, this might be caused by the fact that self-help books the kind of books people like to highlight passages in — they're read for instruction, not entertainment. But what's interesting is that the most-highlighted passages of novels and non-fiction books suggest that many people are reading them (or at least highlighting them) for instruction too.

"Pretend to be completely in control and people will assume that you are."

From Cutting for Stone:

"The key to your happiness is to own your slippers, own who you are, own how you look, own your family, own the talents you have, and own the ones you don’t. If you keep saying your slippers aren’t yours, then you’ll die searching, you’ll die bitter, always feeling you were promised more. Not only our actions, but also our omissions, become our destiny."

"You gone have to ask yourself, Am I gone believe what them fools say about me today?"

Some cultural critics fear that the novel is dying a slow death in popular culture. Their fears will be confirmed by the books on these lists.

When you take away The Hunger Games, the top 50 most-highlighted books include just eight novels written since the start of the 20th century.

Apart from the previously-mentioned Cutting for Stone and The Help, that group includes Atlas Shrugged, Dan Brown's The Lost Symbol, William P. Young's The Shack, and the three books of Stieg Larson's Millennium Series.

The most-highlighted passage in third book of that trilogy, The Girl Who Kicked the Hornet's Nest, is one of the most interesting on the list. Rather than an affirming mantra or crucial part of the plot, it's a reminder that 2,131 readers made to themselves that they might want to someday read a specific book mentioned offhand in Part 4:

6) Lots of med students are using Kindles to study

Amazon also published a separate list of recently heavily highlighted books. These aren't the books with the most highlights, just the books that got a very high proportion of their highlights recently (Amazon doesn't disclose exactly what "recent" means).

This being June, the list is populated by lots of textbooks that clearly highlighted as students studied for exams. 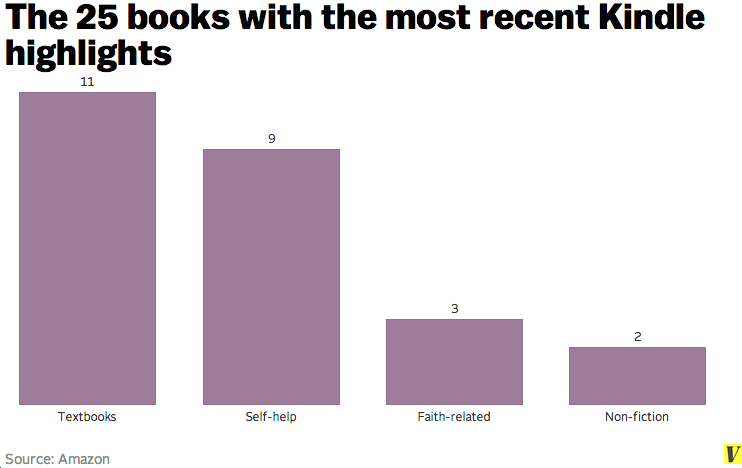 The textbooks cover a few different fields, but slant heavily towards those used by med students. Looking at their most-highlighted passages gives you an interesting window into what you need to know to be a doctor (or, at least, to pass a med school exam):

"Another option would be a single progesterone level: levels greater than 25 ng/mL almost always indicate a normal intrauterine gestation, whereas values less than 5 ng/mL usually correlate with a nonviable gestation."

"Ultrasonography to assess for abdominal aortic aneurysm is recommended (Level B) for men aged 65 to 75 years who have ever smoked."

And from Kaplan Medical USMLE Master the Boards Step 3:

"osteomyelitis of the skull from pseudomonas in a patient with diabetes."

7) George W. Bush has made his mark 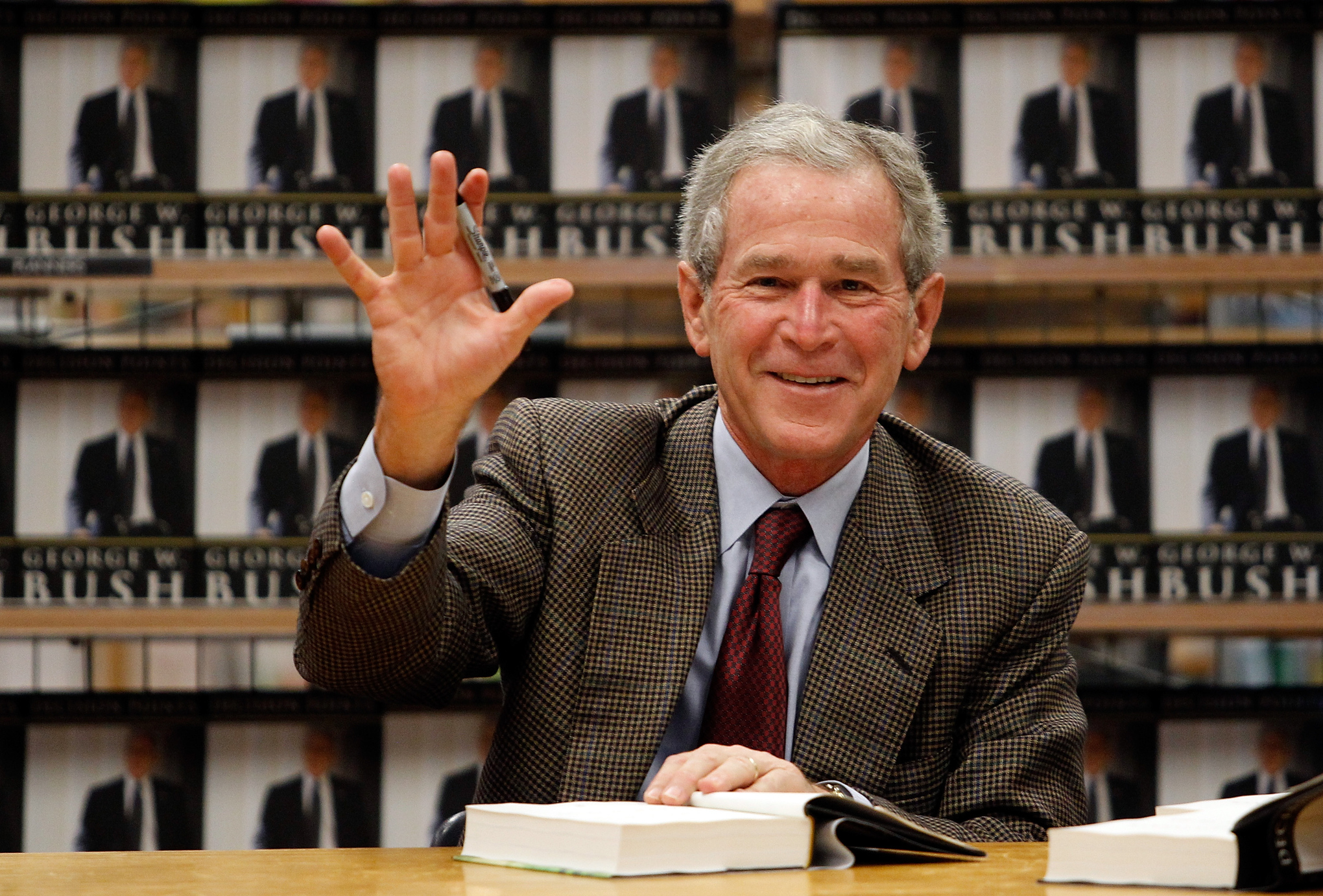 The 43rd president's 2010 memoir Decision Points may not make lists of the best books ever written by presidents. But he's the only president to have made it into the top 50 most highlighted books so far.

Its most highlighted passage, with 2763 highlights:

Update: this article previously didn't mention the fact that the Hunger Games books are free to Amazon Prime account holders.