Share All sharing options for: Humans have spent more time watching Gangnam Style than writing all of Wikipedia

The Economist has a wonderful chart comparing the amount of man-hours it took to build various wonders of the world (the Empire State Building, the Great Pyramids, Wikipedia) to the amount of time (140 million hours, or over 16,000 years) humans have spent watching "Gangnam Style" on YouTube, which has now been viewed over 2 billion times: 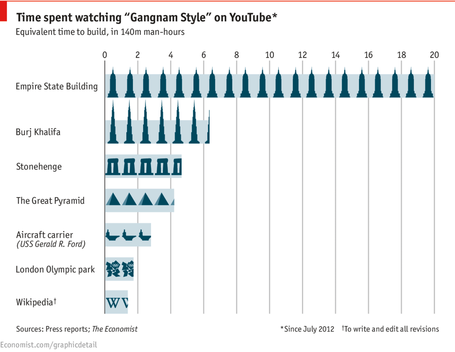 Chart by The Economist

But I feel like the implicit comparison here is kind of confused. The obvious takeaway is, "Damn, isn't it a shame we wasted so much time watching 'Gangnam Style' that could have been spent building skyscrapers/Wikipedia/archaic stone structures?" But if you flip that sentiment around, it starts to look a lot sillier.

We don't have numbers for how much time was spent watching sports in the London Olympic park (or watching events in the park on television), or how much time tourists have spent at Stonehenge or looking at photos of it, and so forth, but if we did, the time totals in question would surely dwarf the amount of time it actually took Psy to write and record "Gangnam Style" and its music video. So we could just as well ask, "Why are you wasting your time gawking at a weird stone in England when you could be writing and recording songs and videos that bring joy to hundreds of million if not billions of people?"

If that sounds weird, it's because this entire comparison is weird and incoherent. We're comparing time spent enjoying something to time spent making other things. And the whole point of making stuff is that people will enjoy it later on — and, in most cases, spend more time enjoying it than was spent making it in the first place. Taken to an extreme, the "what a waste of time" takeaway here implies that human life is meant to be spent toiling and any time off for enjoyment is a lamentable waste, which in turn implies that we should spend our lives building things no one ever gets to enjoy. It's a bizarre, dystopian way to think about the world.

It is also possible that I am dramatically overthinking this and the chart is just sort of funny. Who's to say, really. In case you want to add to the 140 million hour total, here you are:

Hat-tip to Justin Wolfers for the chart.