Has Google sold billions of dollars in ads that don't work?

Share All sharing options for: Has Google sold billions of dollars in ads that don't work?

Search advertising is a huge business. In 2012, search engines such as Google and Bing earned almost $17 billion by selling ads displayed alongside search results. But a new study from researchers at eBay suggests that a lot of that money is wasted. "Our study suggests that much of what is spent on internet advertising may be beyond the peak of its eﬃcacy," the authors write.

The researchers did something that only an e-commerce giant like eBay could do. eBay has historically bought search ads for millions of keywords on search engines like Google and Bing. To test the effectiveness of these ads, they stopped buying ads on these search areas in some parts of the country in order to test how much business these ads were really generating. They found that certain types of ads are less effective than is commonly supposed.

The folly of brand advertising

The researchers looked at two types of search ads. The first, known as "brand advertising" occurs when users are searching for a website by name. It looks like this: 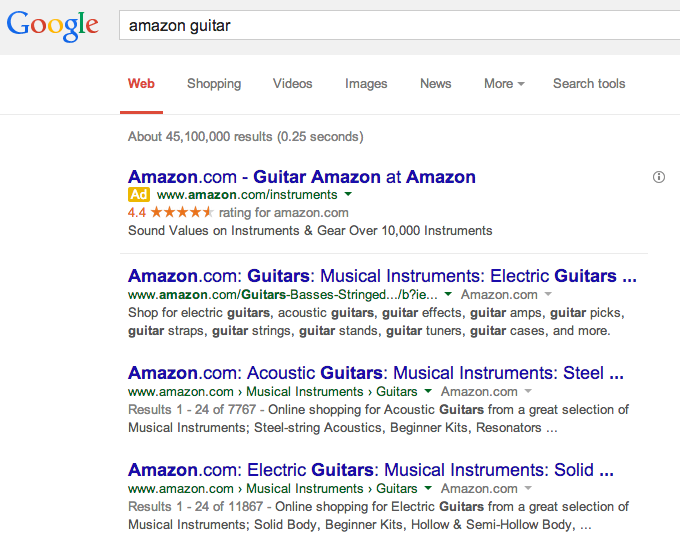 Here the user is trying to browse guitars for sale on Amazon.com. Amazon has paid Google to place that ad for Amazon at the top of the search results. But notice that the next three search results also go to Amazon pages.

WHEN THE COMPANY STOPPED BUYING ADS, 99.5 PERCENT OF USERS CLICKED ONE OF THE ORGANIC LINKS INSTEAD

If the user clicks on the ad, Google will charge Amazon for the click. If the user instead clicks on one of the "organic" search results further down the page, Amazon gets the traffic for free.

So why do companies pay for the ads? Theoretically, putting the ad at the top of the page might increase the user's probability of clicking. But the eBay researchers find the effect is very, very small. When the company stopped buying ads for their own brand (e.g. when "ebay" was one of the user's search terms) 99.5 percent of users clicked one of the organic links instead. That suggests well-known companies pay for 200 clicks they would have gotten anyway for every extra click the ads generate.

Of course, not all ads are like this. Most of the time, users search for the product they're looking for ("guitar," "iPod," "shoes," and so forth) without specifying a specific website. Various companies bid to have their ads displayed alongside these search results. Unsurprisingly, the researchers found that this kind of ad does increase click-through rates. But the effect on sales was more ambiguous.

As expected, the measured click-through rate from search engines declined significantly in areas where users weren't shown ads. But the effect on the overall purchase rate was much smaller: eBay found that buying search engine ads only increased eBay's sales by 0.66 percent.

Close examination of the data revealed that the effectiveness of search ads depended on the type of user. Search ads were highly effective at bringing in business from users who had never shopped at eBay before. But that effect was swamped by frequent eBay shoppers, who accounted for the majority of clicks but who didn't actually buy more products when they were shown search ads.

It seems that frequent eBay customers don't need ads to find products on eBay. If they're not shown ads, they'll find their way to eBay's website some other way. On the other hand, customers who have never heard of eBay are more likely to buy something there if ads inform them that eBay has a particular product available.

Why computing a return on investment is difficult

The researchers find that the return on investment for non-branded search ads is negative — that is, each dollar spent on ads produces less than a dollar of additional revenue. This is because the positive returns from new users is swamped by a larger number of clicks by existing eBay customers who would have bought from eBay anyway.

Still, this calculation has a serious limitation. As the authors acknowledge, it's possible that "there are long term benefits that we are unable to capture in our analysis."

attracting a first-time customer makes it more likely that she will purchase a second, third, and fourth time

The researchers find that clicks from customers who have never purchased from eBay produce a positive return on investment, because they spend much more than the cost of the ad that brought them to the site. But this actually understates the value of those customers. Because attracting a first-time customer also makes it more likely that she will purchase a second, third, and fourth time in the future. So a method that only counts the short-term return on search ads — the revenue a customer generates on the day she clicks an ad — is going to systematically underestimate the value of search ads.

And this works in the opposite direction too. As the incumbent, one of eBay's big goals is to convince loyal customers to continue buying from them month after month. If eBay stopped bidding on search ads, it would be easier for other customers to buy ads and lure customers away from eBay. While the effect on eBay's sales might be small in the short run, there's a danger that longtime eBay customers could discover they liked the new site more and never come back. So buying ads that mostly attract existing eBay customers can be seen as a defensive measure — a way to ensure that eBay's loyal customers stay loyal and aren't tempted to stray to a competing website.

One thing that's clear from eBay's analysis is that the value of search ads is only in doubt for large, established companies like eBay. If you're a small startup looking to grow your customer base, eBay's results suggest that search ads will work for you. But if you run a famous online retailer, eBay's data might give you a reason to scale back your advertising budget.

Update: A Google spokesman says that its own research has found more positive results. You can read Google's research on the topic here.