Share All sharing options for: 5 photos of world leaders being hilariously awkward at the D-Day anniversary summit

To commemorate the 70th anniversary of the "D-Day" Allied invasion of Normandy, leaders from the US and nearly every European country (see if you can guess who wasn't invited) met for a commemorative ceremony in France on Friday.

The event became, by all visible indications, one of the most awkward heads of state encounters since Stalin, Churchill, and Roosevelt pretended to be besties at Yalta.

The awkwardness began even before Friday. French President Francois Hollande, who was formally hosting, had dinner twice on Thursday so that he could eat separately with President Obama and Russian President Vladimir Putin to avoid an uncomfortable dinner with the two now-adversaries. It was a pretty funny metaphor for the wartime tensions between the American and Soviet allies that have remained awkward ever since.

Judging by photos from Friday's lunch event, Hollande tried — but failed — to keep Putin and Obama apart from one another, like a party host trying to quietly separate out two friends who'd recently broken up.

Hollande runs interference on Putin while Obama pretends to be engrossed in conversation with Queen Elizabeth: 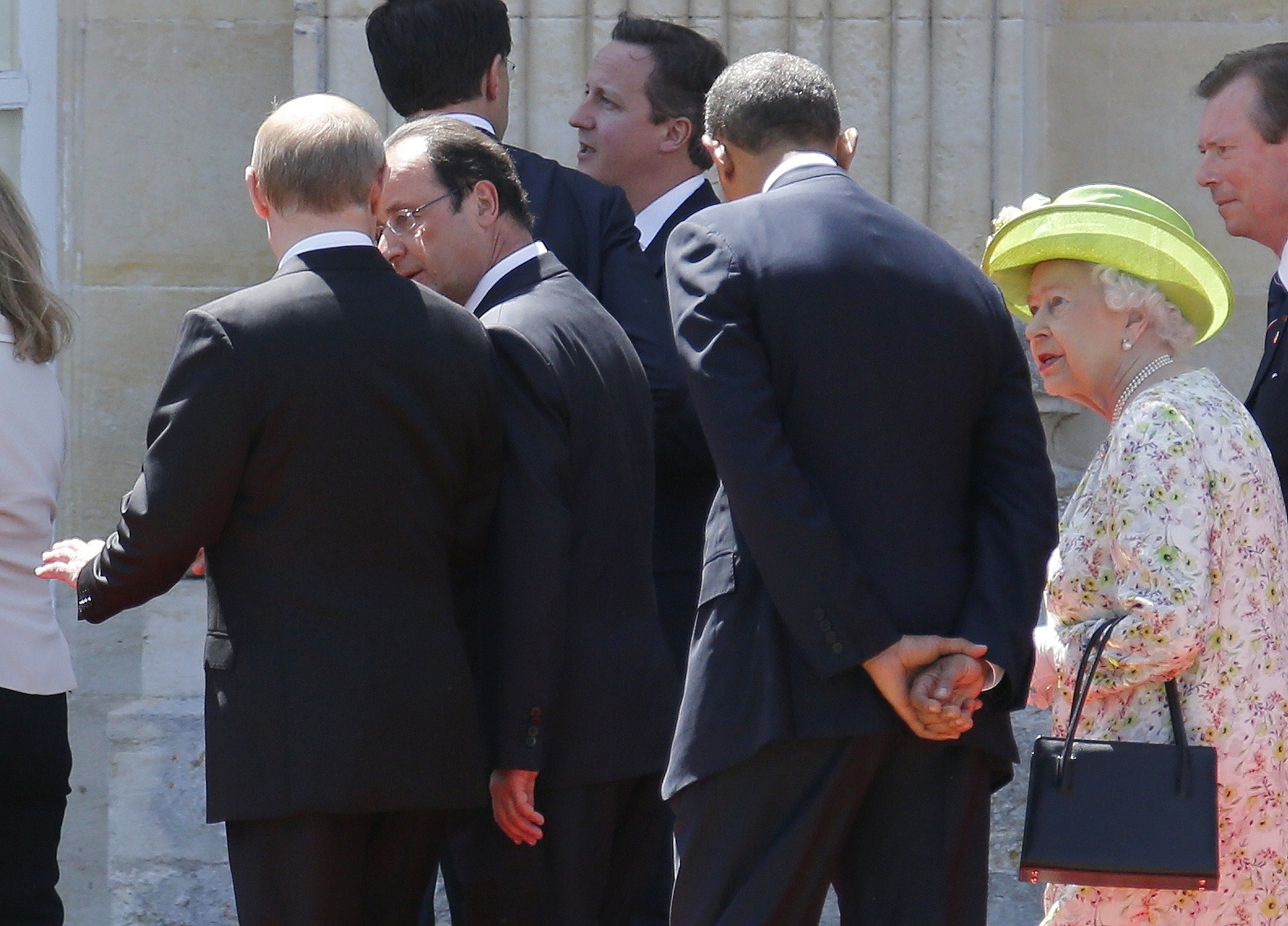 We've all done this at parties. World leaders do it too, but when they're trying to avoid eye contact with a former friend they got in a fight with it, they do it by glomming on to Queen Elizabeth II. So it's a little different.

Putin tried not to let it get awkward and totally failed 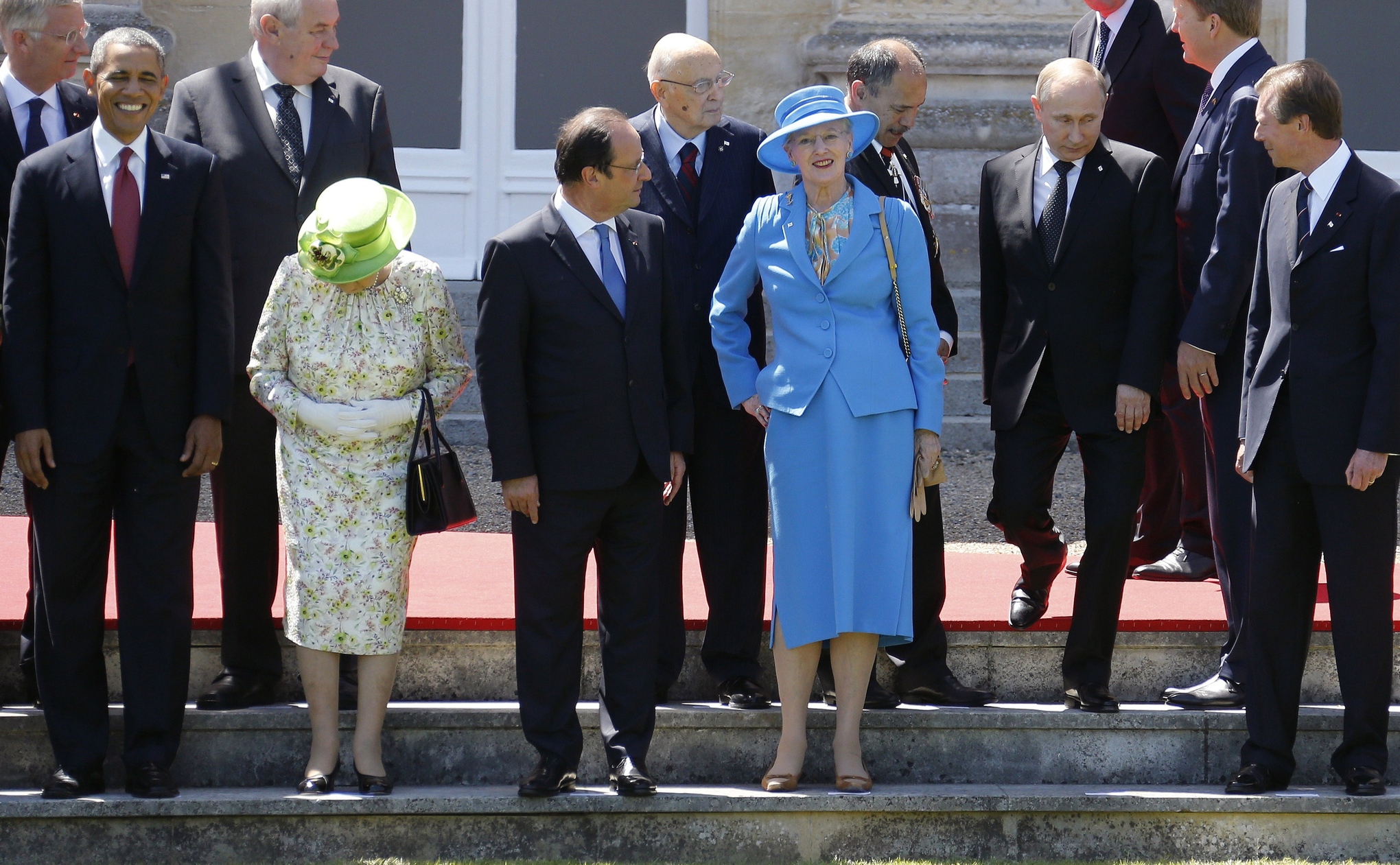 Everybody made nice publicly with Putin because the event was about remembering their shared alliance in World War Two, but the atmosphere was pretty frosty. The US, Japan, and top European leaders recently expelled Russia from the G8 (now the G7) for its invasion of Ukraine. Just the night before Friday's lunch, Obama and European leaders had publicly chided Putin and threatened him with more economic sanctions if he didn't pull back from Ukraine. That let's-try-to-make-nice-but-really-we-hate-you atmosphere comes through pretty clearly here; everyone is openly staring at Putin, except for Obama, who like any really angry ex just pretends not to see him. Only Queen Margrethe II of Denmark (in the blue dress) plays it off well.

By photographer Stephen Crowley, this is just the pinnacle of Friday's awkwardness, as the 20 attending heads of state gathered for the official photo. I just love this photo so much: you've got Ukrainian President-elect Petro Poroshenko off to the left, Obama sort of clumsily trying to help Elizabeth, and then all by himself hanging out on the photo's far right is Putin. Neither Putin nor Poroshenko is acknowledging one another, but the weirdness is just palpable. And it should be: Poroshenko supported the Ukrainian protest movement to oust his country's pro-Moscow president, Putin invaded his country, and both of them have had some tough things to say about one another. However bad your most awkward moment ever was, this is worse. 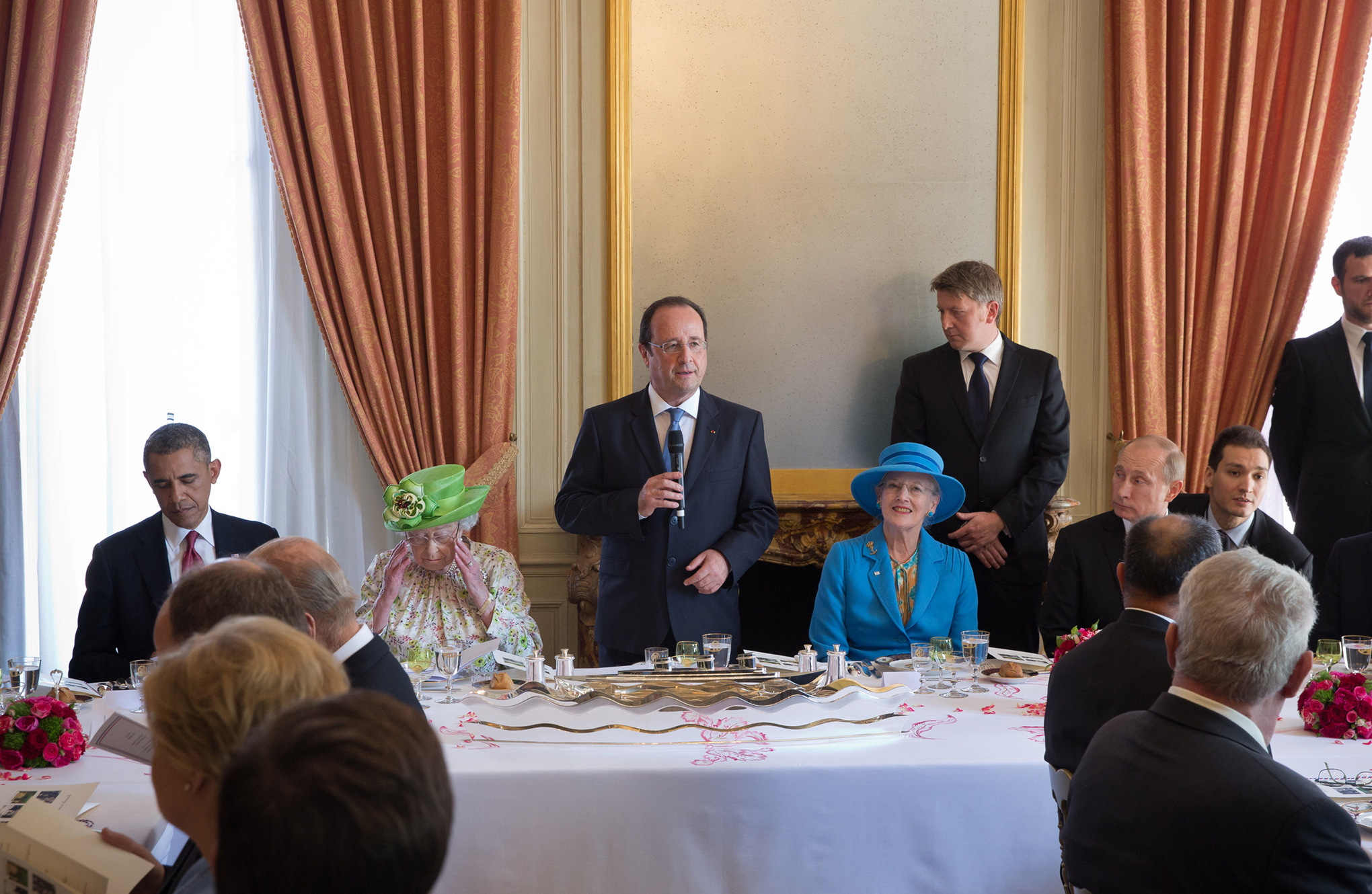 Okay, so, obviously Queen Elizabeth II is just adjusting her glasses here, and not rubbing her temples in frustration with the unspeakable insufferability of her fellow heads of state. But, looking at this photo of the formal D-Day anniversary luncheon, you can see why she might want to. You've also got to feel for poor Hollande, who 70 years later is still trying to balance the American-Soviet frenemy alliance that helped liberate his country and defeat the Axis. 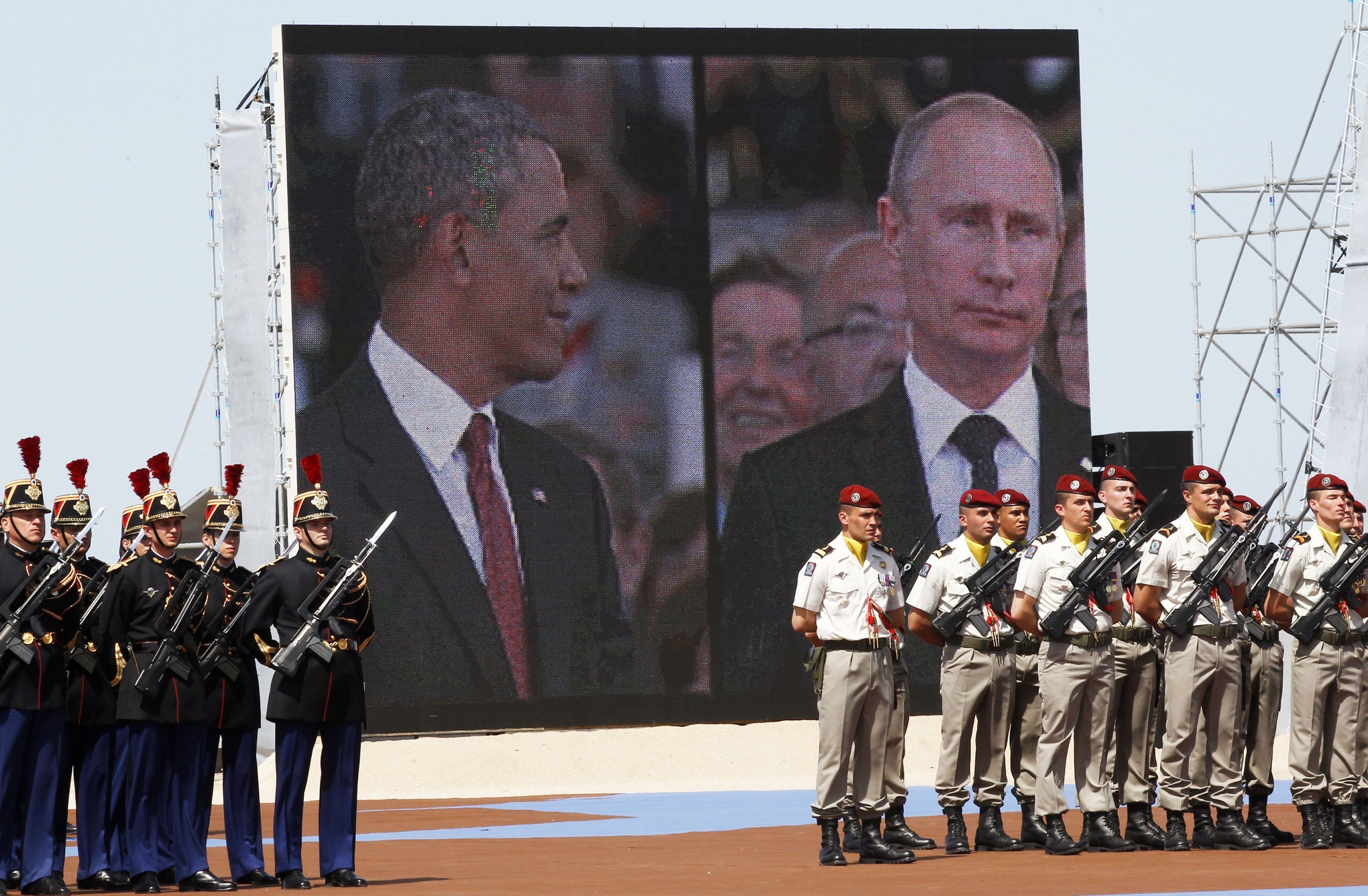 What's actually happening here is that the D-Day anniversary jumbo-tron happened to show Obama and Putin separately but simultaneously in a way that made it look as if Obama were smirking at Putin but wasn't. But even if the appearance of that smirk is not accurate, there's definitely truth to it: weeks after it had looked like Putin was winning in Ukraine, it now appears that Obama's strategy of pushing sanctions and letting Putin overreach has largely succeeded. Putin has every reason to look sour and pretend not to see Obama, who would certainly be justified, if undiplomatic, in smirking triumphantly.