The monthly jobs report is flawed. This economist wants to fix it.

Share All sharing options for: The monthly jobs report is flawed. This economist wants to fix it.

The jobs report today said employers added 217,000 jobs to their payrolls in May, and that number will be widely reported. But that number is nowhere near the actual number of jobs that employers created, thanks to seasonal adjustment.

The government tweaks the data each month to show how many jobs were created, minus the effects of regular occurrences like holiday shopping and summer travel. However, the recession threw that off, and it took years for the report to correct itself. Jonathan Wright, professor of economics at Johns Hopkins University, wrote a paper earlier this year that proposes a new seasonal adjustment system. Vox talked to him about how to improve the jobs report.

Danielle Kurtzleben: So how wrong have our job counts been?

Jonathan Wright: The effect was only important in the three or four years after the recession. I don't think it's affecting the data now much, but it certainly was in 2010, 2011, 2012.

The way seasonal adjustment works, approximately, is that the seasonal patterns for a given month are estimated as the average for that month over the previous, say, three years. It's a little more complicated than that, but that's intuitively what it is.

So you had this huge drop in employment from November '08 through March '09. So the seasonal filter thinks, "Oh, winters got colder, or at least winters had bigger job losses." So for the next three or four years, the seasonal factor was pushed down because it was averaging in that period.

That boosted jobs in November through March and pulled them down the rest of the year. But that effect has worked through by now. 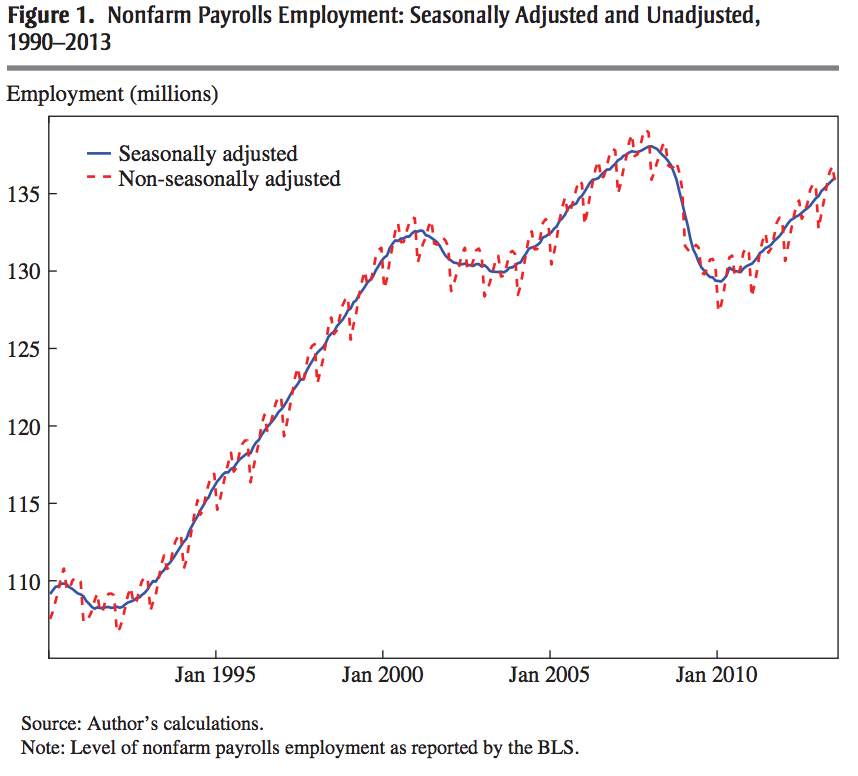 DK: So does this explain the "summer swoon" we were getting for a while there?

JW: I think it explains at least in 2010, 2011, 2012, it explains the pattern, or part of the pattern, of job growth looking really good in the spring and then falling back later in the year because the seasonal factors were meshed in.

DK: If the effect is gone, do we still need to change how we do adjustments?

JW: I think it's still a good idea to use a longer window. I think there's a good case to be made for doing that all the time. It so happens that right now, it just doesn't matter whether you do that or not much. But at some time in the future there will be another shock. [My method] would be less prone to that effect.

DK: How much longer of a window do we need?

JW: My research would say 6 to 10 years would be better than a three-year window.

DK: Is it possible that this rough winter we just had threw off seasonal adjustment for coming years?

JW: Well, one thing i think is important to remember is that seasonal adjustment is not supposed to correct for weather. "Seasonally adjusted" is not weather adjusted.

I suspect that, yes, the unusual weather probably did knock off seasonal effects, but it's very different qualitatively from the Great Recession, when you had job losses at the pace of 800,000 a month that had categorically nothing to do with season.

This time, you had job growth that was a little slower than it would have been. The effect is there, but we're talking about something more like a 10,000 effect on seasonal numbers rather than a 50 to 100,000 effect.

DK: Maybe explain that for us — what do you mean when you say seasonal adjustments don't correct for weather?

JW: Seasonal adjustment is something that happens at the same time very year. It can be related to the weather, but it's the recurrent pattern in the weather. So every February, construction employment falls because it's cold. That's part of the climate and it should go into seasonal adjustment. But what it's not trying to do is adjust for the fact that this February is colder than a normal February.

DK: Do you think that if seasonal adjustment factors were off, they had any major effects on policy early on in the recovery?

JW: More generally, I think that this episode has taught us just what a big deal seasonal adjustment is — that the magnitude of the seasonal adjustment that is made in the jobs data is just stunning. Like how every January, there are two million job losses. That's just the normal thing for January. And then we get excited over whether the job growth, seasonally adjusted, was plus 100,000 or 130,000, but we have this enormous seasonal pattern in there, and we're not sure how to correct for it.

DK: Well, and that monthly payrolls number has a margin of error of nearly 100,000 as well.