Everything you need to know about Walmart, in nine charts

Share All sharing options for: Everything you need to know about Walmart, in nine charts

Walmart has grown from a single store in Rogers, Arkansas, into a massive American institution. It takes in more money per year than most countries produce in GDP. It employs 1.4 million people, or nearly 1 in 100 American workers. Its stores cover 1.1 billion square feet.

It's also evolving fast as it tries to expand its reach into more places and more parts of people's lives than simple grocery and clothes shopping. Below are nine charts that explain exactly how big Walmart is, and exactly how it intends keep getting bigger. 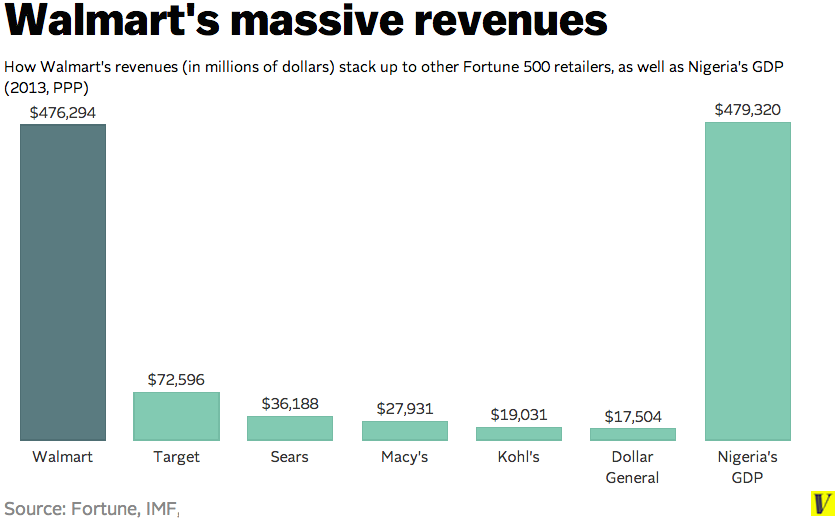 In its Fortune 500 listing, Fortune puts Walmart in the "general merchandisers" category, alongside other big-box stores like Target and department stores like Macy's. But Walmart barely resembles those peers when you look at revenues. The store's $476 billion in 2013 revenues is nearly three times the size of revenues at the next five biggest retailers in its class. In fact, Walmart's annual revenues are less comparable to your typical US retailer than they are to the GDP of a large national economy, like Nigeria (adjusted for purchasing power parity).

This gif tracks the amazing growth of Walmart stores since the store was founded in 1962 through 2006, when there were nearly 3,200 Walmarts nationwide. Though it doesn't quite make it to 2014, the map shows just how fast the store exploded from its Arkansas roots, and how pervasive it has become nationwide. And the growth has been fantastic even since 2006  — today there are 4,233 Walmarts in the US.

3. It's even bigger abroad than it is here. 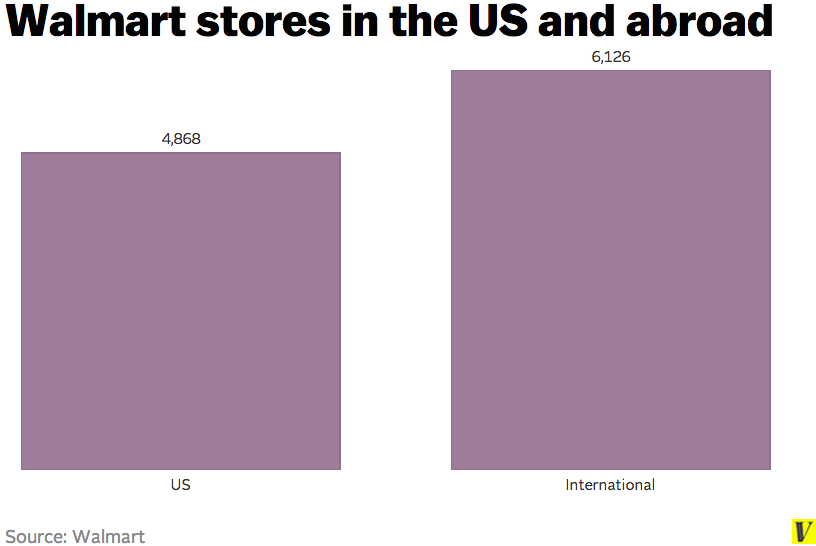 Walmart has an all-American image — it encourages shoppers to buy American, and it has the folksy backstory of the Arkansas-bred Walton family — but really it's mostly international. There are more than 6,000 Walmart-owned stores outside the US. The vast majority of those are in Latin America, but the retailer is also making an aggressive push in Asia and particularly in China. 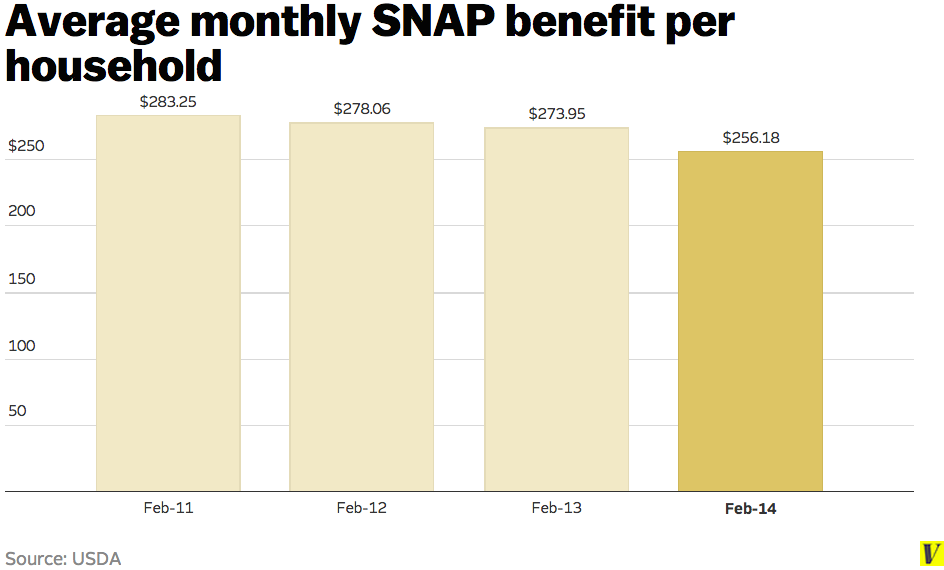 Nearly one in five food stamp dollars goes to Walmart. So when recent cuts to SNAP — the Supplemental Nutrition Assistance Program, also known as food stamps — went into effect, they ate into Walmart's profits. The average household benefit is right now around $256 per month, down by nearly $30 from payouts in 2011 and down by around $17 from a year ago. That reduction, spread out over a large population that spends a lot of that money at Walmart, means a hit to Walmart's profit.

In its disappointing earnings report last quarter, the company reported that SNAP cuts helped pull its grocery profits down by 0.9 percent.

It isn't just that Walmart takes in a lot of money from people spending food stamps; Walmart's workers are also major beneficiaries of government safety net spending. According to an April 2014 report from Americans for Tax Fairness, Walmart employees receive an estimated $6.2 billion per year in government benefits (though Walmart heavily criticized this estimate). 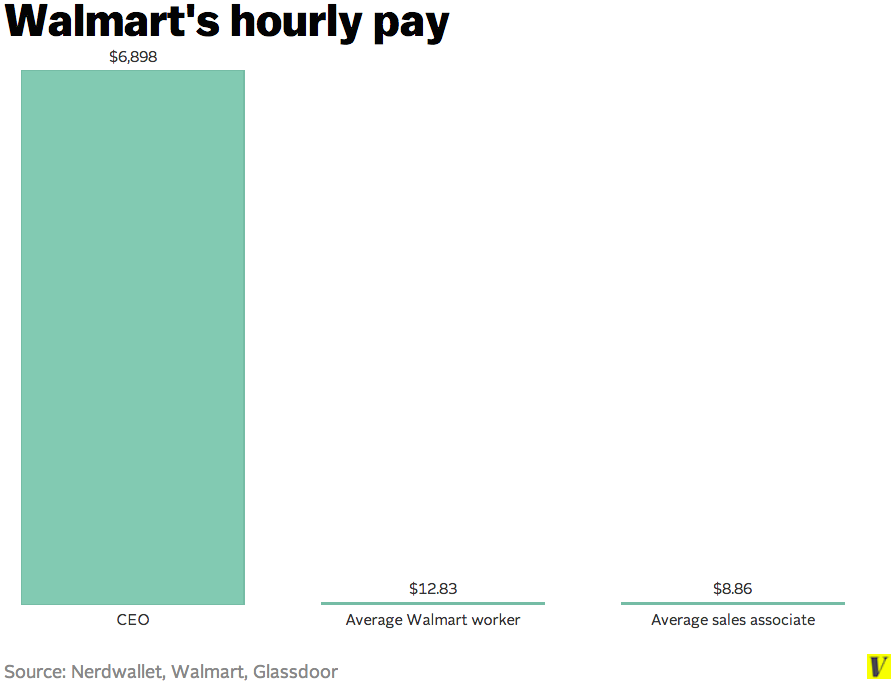 Protesters traveling to the annual shareholders meeting this week are asking for a $25,000 pay for all full-time employees, according to Businessweek — currently, less than half of Walmart's workers earn that. That would be a big raise for many workers — though Walmart says its average employee earns $12.81 per hour, for some it's much less. According to Glassdoor.com respondents, a sales associate at Walmart earns $8.86 per hour. One 2013 analysis suggests the former CEO of Walmart, Mike Duke, earned nearly 800 times that per hour.

Could the company afford that? Left-wing think tank Demos crunched the numbers and found that if the company spent around $6.6 billion to boost employees' pay — the amount the company spent on share repurchases last year — it would boost low-wage workers' hourly pay by $5.13 per hour.

According to a new paper from the Roosevelt Institute, Walmart is one of the 10 biggest stock repurchasers in the country. One big reason a company might do a repurchase is to boost its stock price.

And while Walmart may not stop those repurchases anytime soon, what this does signal is that higher wages would only be a tiny fraction of the company's annual revenues.

6. A move into organic food 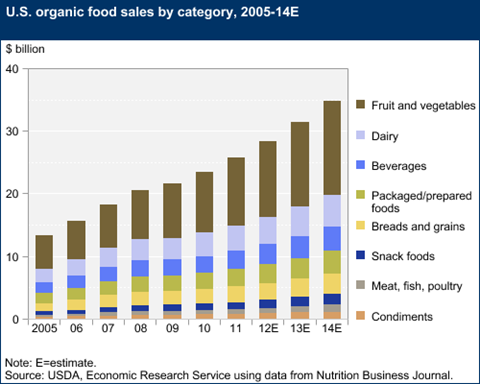 Amid slowing sales and revenue growth, Walmart is expanding its offerings, and one key area is organics. The American appetite for organic food is growing fast, according to data from the USDA data. US consumers now spend around $35 billion on organic food per year, boost its sales: selling organics allows it to attract more affluent consumers, but Walmart's massive size also allows it to make organics more affordable for the non-foodie set.

7. Reaching out to unbanked America 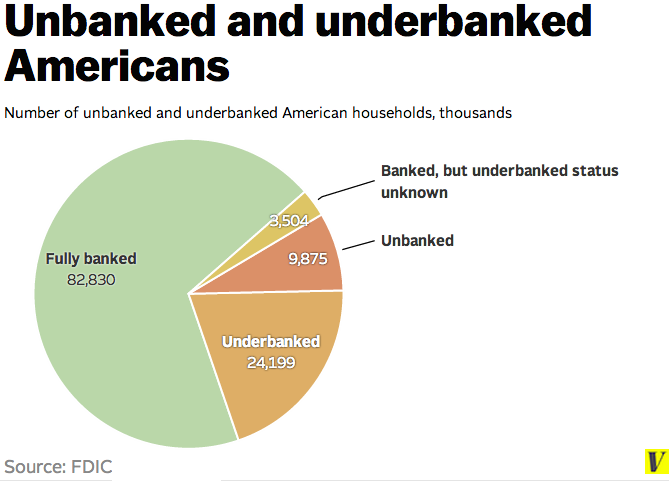 Everyday Walmart shoppers may not realize the growing number of financial services Walmart has been providing. The company teamed up with American Express to offer a Bluebird debit and credit card service in 2012. Walmart also offers check cashing, auto insurance, and tax prep services. And the store just this year announced it would be getting into money transfers, with a program called Walmart 2 Walmart.

As with organic foods, getting into finance is another way for Walmart to boost its revenues by expanding into a new market. According to the FDIC, more than one-quarter of all US households are either unbanked — meaning they don't have accounts with traditional banks — or underbanked, meaning they use nonbank financial services like money orders or check cashing services.

8. All of that growth is slowing down.

Walmart's revenue growth isn't nearly as speedy as it used to be: 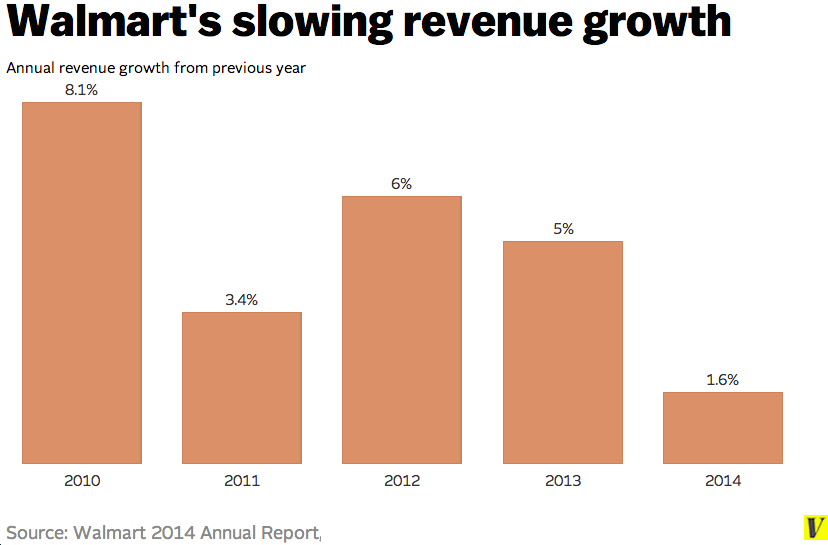 And business is also slowing down in same-store sales, a measure of sales at stores that have been open for a year or longer. 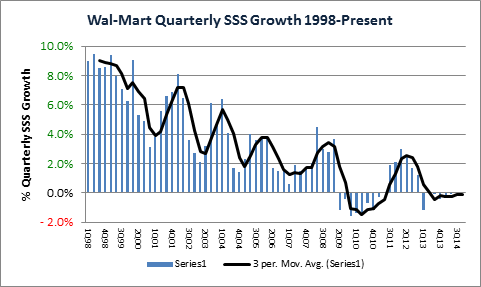 Part of the reason Walmart's sales growth has declined is that such a massive company simply can't grow at a constant rate forever, says Ken Perkins, founder of Retail Metrics, a retail consulting firm. "Part of the decline is certainly due to the law of larger numbers," he says in an email.

But it's partly because the American consumer is still in pretty bad shape.

"I also think it is reflective to some degree of the erosion in spending power on the part of most lower and moderate income consumers who have very limited discretionary spending dollars at their disposal," says Perkins.

Then there's one of Walmart's long-term challenges: Amazon. As the online retailing giant in starts to grow into same-day delivery and groceries, that could make it an even bigger threat to Walmart.