Did private companies bilk the government for $70 billion in Medicare?

Share All sharing options for: Did private companies bilk the government for $70 billion in Medicare?

Medicare Advantage plans will bill the federal government just about $150 billion this year to provide care to 16 million seniors. A significant chunk of that, a new investigation suggests, may be "improper" overpayments that never should have been made in the first place.

The Center for Public Integrity has spent the last year investigating Medicare Advantage, the tens of thousands of private health plans that use federal funding to provide coverage to seniors. It's an optional program that's a decade old, and increasingly popular among seniors. 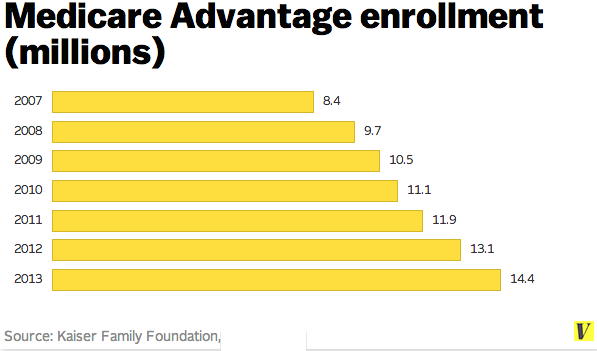 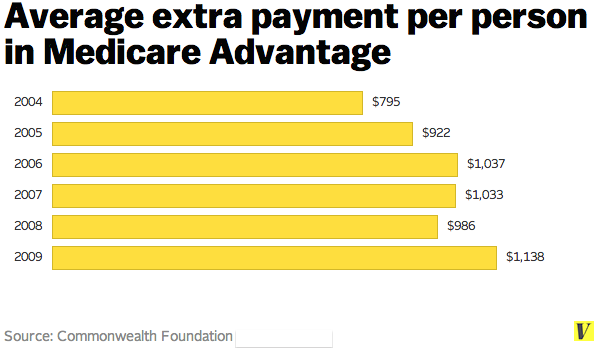 The Center for Public Integrity investigation suggests the problem is actually more serious: by exaggerating how sick their patients are, Medicare Advantage plans may have bilked the government for $70 billion in "improper" payments between 2008 and 2012.

The federal government uses something called risk scores to determine how much it should pay a health insurer for taking care of a Medicare Advantage patient. The idea here is to incentivize insurers to take on sicker Medicare enrollees, ensuring that they don't avoid the seniors whose costly health conditions would otherwise make them a money loser.

Incentive programs don't, however, always go as planned. And the CPI investigation suggests that some insurers gamed the risk score system. They would oversell how sick their patients were to get a higher payment. The CPI investigation cites a few specific examples of this type of behavior:

In South Florida, one of the nation's top privately-run Medicare insurance plans faces a federal investigation into allegations that it overbilled the government by exaggerating how sick some of its patients were.

In the Las Vegas area, private health care plans for seniors ran up more than $100 million in added Medicare charges after asserting patients they signed up also were much sicker than normal - a claim many experts have challenged.

In Rochester, New York, a Medicare plan was paid $41 million to treat people with serious diseases - even though the plan couldn't prove the patients in fact had those diseases.

It's not known which insurers, exactly, are suspected of overbilling the federal government in this way. CPI says its asked the federal government for this information and that "federal officials refused to identify health plans suspected of overcharging Medicare, citing agency policy that keeps many business records confidential." CPI has filed a lawsuit to make this information public.

The investigation could give Medicare Advantage plans a tougher time in its annual negotiations with the federal government over what rates it should be paid. Health insurers have, as of late, been quite successful in lobbying the Obama administration not to cut into their reimbursement rates. They typically run large ad campaigns like this one warning cutting Medicare Advantage rates would have terrible consequences for seniors.

At one point last year, they convinced regulators to change a proposed 2.3 percent rate cut into a 3.2 percent rate increase.

Still, these reported cases of overbilling could make their lobbying campaigns a lot more difficult to pull off in the future.