The uninsured rate has plummeted since Obamacare kicked in

Share All sharing options for: The uninsured rate has plummeted since Obamacare kicked in

The uninsured rate for the last quarter of 2013 was 17.1 percent. That means there's been a 22 percent drop over the last five months in people who lack health insurance coverage. 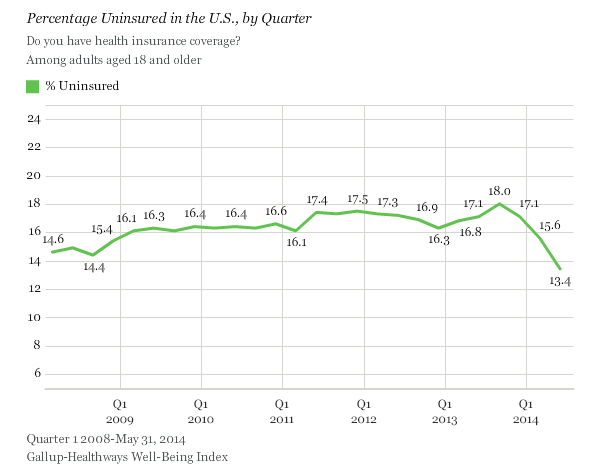 The uninsured rate in both April and May was 13.4 percent in Gallup's regular surveys, suggesting that the decline in Americans without coverage has slowed now that Obamacare's exchanges are no longer open for general enrollment (people with certain life changing events, however, are eligible for special enrollment periods).

It's possible that the uninsured rate could keep falling though, largely because Medicaid — the other big part of Obamacare's insurance expansion — is open for enrollment all year long. People can sign up for that public insurance program anytime, meaning you could see some continued drops in the uninsured rate later this year, too.