Share All sharing options for: 8 conservatives who hated Obama for not releasing Bergdahl — and now hate Obama for freeing him

President Obama's deal to secure the release of American POW Bowe Bergdahl from Afghanistan in exchange for the release of five Taliban prisoners from Guantanamo Bay may have set a landspeed record for "fastest descent into a partisan foodfight." The issue has become utterly, totally partisan, with Republicans and conservative media slamming Obama for the move — demonstrated by these hilariously hypocritical tweets by conservatives who had previously attacked Obama for not releasing Bergdahl now attacking him for doing exactly the thing they'd wanted him to do. They're worth highlighting not pick on conservatives, but to illustrate the psychology of partisanship and how it's driving the Bowe Bergdahl debate.

Majority.fm's Matt Binder and LobeLog contributor Derek Davison noticed something funny: just before Bergdahl was released, conservatives on Twitter loved to blast Obama for not freeing Bergdahl. There was even a whole meme on conservative Twitter saying Bergdahl was "abandoned by this administration."

But all of a sudden after Bergdahl was released, these people changed their tune. Here's 8 particularly choice examples that Binder and Davison dug up:

1. "Obama had to lay out the red carpet for the terrorists" 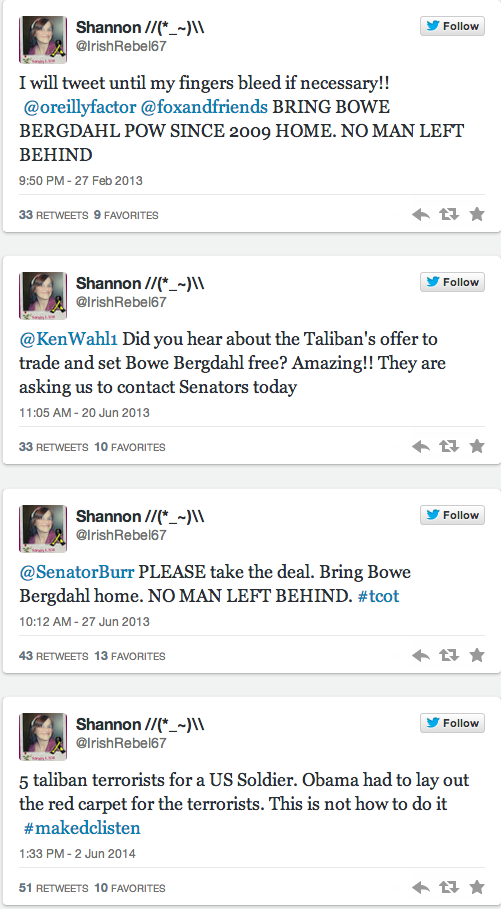 2. "Stand him against the wall with Obummer"

@OpBowe Thanx for follow. Thank you for the opportunity to sign the petition to bring home Bow e Bergdahl. Semper Fi!

Shock claim: Army wanted to shoot Bergdahl http://t.co/baWbsYlctx And IMO, he should be. Stand him against the wall with Obummer.

4. "Where's the petition to hang that traitor?"

Will this administration do anything to bring P.O.W. Bowe Bergdahl home? #bringbackBergdahl

@msabigail43 @AIIAmericanGirI I signed that petition, where's the petition to hang the traitor?

5. "Obama should b impeached 4 derelict of duty"

Bring Sgt Bowe Bergdahl home. I will shout from the mountain tops until he comes home...retweet to all and all Vets. LETS ROLL PEOPLE!

6. "They died because of a traitor #outraged"

Please support BOWE BERGDAHL! He is a #POW and we really need to get him HOME! #SupportBowe #BringBoweHome #SOT http://t.co/8vJxovhS

US blood on Bowe's hands: The men who DIED looking for Bowe #HonorTheFallen pic.twitter.com/9wZy4TEXnX #tcot

Why has Army Sgt. Bowe Bergdahl been left behind and practically forgotten by the Obama administration?

This whole pro Bergdahl by Obama is just another example of the Obama terrorist appeasement policy...IMPEACH!!!!

It's not just these eight people. Binder and Davison found tons of them.

It's true that the less savory parts of Bergdahl's story — the accusations that he got US soldiers killed, for instance — came out after his release. But we've known for years that Bergdahl had beliefs that could be describe as anti-American, and was very likely a deserter. Michael Hastings' blockbuster Rolling Stone story on just these points came out in June 2012. Anyone who was really following the Bergdahl saga wouldn't be surprised by much of what's been discussed since its release.

The point is that these people either didn't care about those details until the case became a partisan issue, or weren't actually following the Bergdahl issue. They just latched onto an ideologically convenient way to bash Obama. You think the president hates the troops — why hasn't he brought our captured man home? You think Obama is secretly anti-American — why did he release Taliban leaders to free a traitor?

Now, you can find people saying just about anything if you search long enough on Twitter. But these tweets perfectly demonstrate the larger principle that politics makes you stupid. A raft of social science research finds that people seek out facts that prove their political worldview correct, and ignore or reject the ones that challenge it. It's so bad that, in experiments, people reject the right answers to math problems when their conclusion is ideologically threatening.

From the get-go, the POW's release was politicized

So it is with Bergdahl, and beyond just these tweets. From the get-go, the POW's release was politicized: the White House held a Rose Garden ceremony announcing his release. That's about as close to a literal victory lap as you could get.

So immediately, two sets of facts emerged. As the collected tweets prove, people just totally transformed their beliefs about Bergdahl to fit the more politically convenient conclusion. As a consequence, the legitimate issues about his release — whether Obama broke the law, for instance — are in danger of being ignored.