Share All sharing options for: Middle class jobs are disappearing — and women are handling it better than men

The middle is falling out of the job market, and has been for decades. A recent article from the Dallas Federal Reserve Bank rounds up the top research on this trend, called job polarization. And one of its charts emphasizes that while job polarization has hurt everyone, women have fared far better than men. 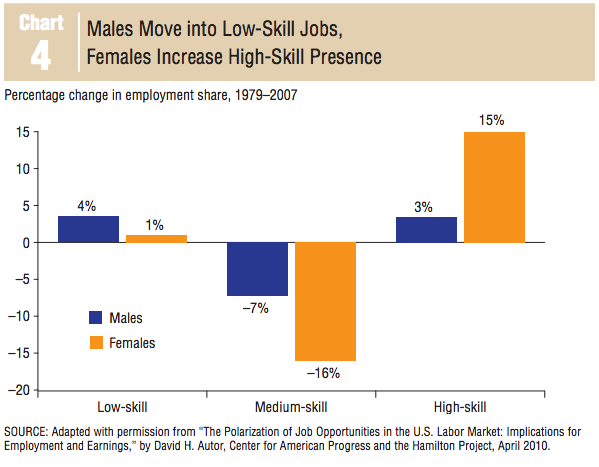 True, women in middle-skill jobs took a much bigger hit, getting booted out of those jobs far more often than men. But women as a whole also managed to find better jobs after this.

According to the paper where Cheremukhin obtained these numbers, women simply adapted better to a changing job market.

This is a more complicated story than it might appear to be from that chart — women joined the workforce in greater numbers over this period, while men increasingly dropped out. But this trend is likely in part a story of education — women have been besting men in higher education for a long time now.

Over the course of this period, the simplest measure of the gender wage gap also shrank, from around 40 percent to 22 percent, where it has mostly stalled since 2007. And it seems likely that this kind of polarization played some role in that.

Of course, when people talk about closing the wage gap, they probably have in mind women doing better, rather than men doing worse. The extent to which gendered job polarization has driven the trend is a sign of what a generally lousy time the past several decades have been for the American working class.

So even if the wage gap continues to shrink, don't expect people to feel happy as long as pay equity is shared with an overall lousy job market.