One in five Americans is now on Medicaid

Share All sharing options for: One in five Americans is now on Medicaid

One in five Americans now gets their health insurance through the Medicaid program, new data released by the Obama administration Wednesday show.

Enrollment in the program has grown quickly in states expanding the public insurance program as part of Obamacare. Those states had 15.3 percent more enrollees than they did before the Medicaid expansion. Non-expansion states' Medicaid programs have grown by 3.3 percent over the same time period.

Not all this growth is due to Obamacare; it can't account for the slight growth in Medicaid enrollment in that didn't participate in the health law's expansion. But it is possible the law had an indirect effect in those places. People who were already eligible for Medicaid, but not enrolled, for example, may have heard about the coverage expansion and explored their options.

These signups by people who were already eligible for coverage are known in health policy circles as the woodwork effect. And it seems to be especially strong in some non-expansion states. For example, South Carolina, which has not expanded its Medicaid program, has seen enrollment rise by 14.4 percent anyway. Montana, another state opting out of Obamacare, has had 10.4 percent growth.

Other states didn't see much of a woodwork effect, and still others actually had Obamacare enrollment shrink. 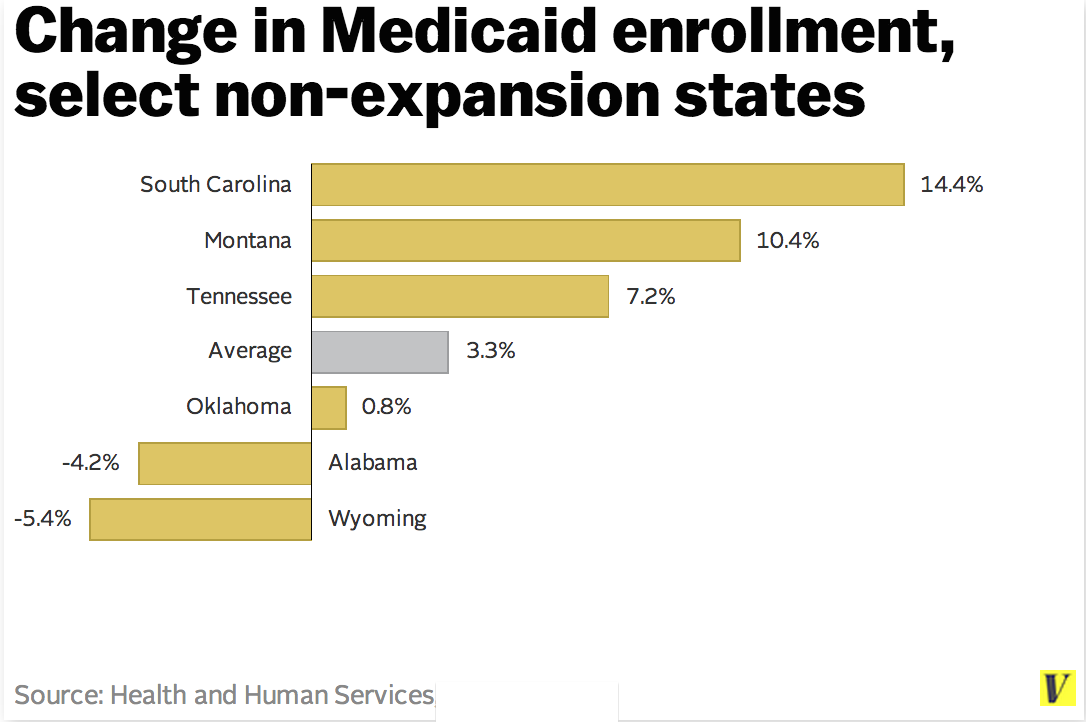 No state expanding Medicaid, meanwhile, has seen a decrease in enrollment; all have more people on their Medicaid rolls than they did before the health care law. And more than anything, this new data underscores the big disparity between states that have made different choices about whether to participate in the Medicaid expansion — and who is, or isn't, getting health coverage there.