Most Brazilians think the World Cup is a waste of money. They're probably right.

Share All sharing options for: Most Brazilians think the World Cup is a waste of money. They're probably right.

A new Pew poll says a 61 percent of Brazilians think hosting this year's World Cup will hurt public services more than it'll bring in money. The relevant economic research says they're probably right — but with an interesting twist.

The 2014 World Cup, which begins on June 12, became a massive source of anger last year, when thousands of protestors took to the streets. They saw the money being poured into the Cup as an insane waste of resources in a country where government watchdogs rate 80 percent of the schools as inadequate and 70 percent of water is untreated.

Pew's poll suggests this anger hasn't died down. Brazilians are even more dissatisfied with the way country is today than they were last year: 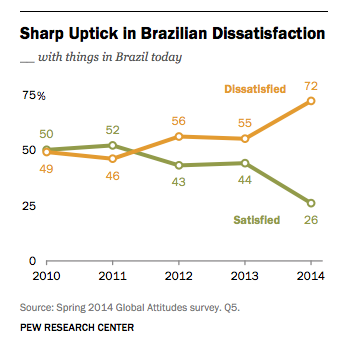 What's more, the majority are probably right. In their 2009 book Soccernomics, economist Stefan Szymanski and writer author Simon Kuper took a look at the research on the economic impact of hosting the World Cup. They found that it's never paid off:

The raising and dashing of hopes of an "economic bonanza" have since become as a integral a part of a modern soccer tournament as the raising and dashing of hopes that England will win it...Japanese and Korean government officials were predicting that the World cup of 2002 could boost their economies by a staggering $26 billion and $9 billion, respectively. Of course, after the event there was little sign of any such boost, and indeed some evidence that tourists had stayed away for fear of soccer hooligans.

"Most economists now agree," they conclude, "that hosting a sports tournament doesn't make a place rich." The reasons are straightforward: the infrastructure to host a massive modern sports extravaganza is super-expensive, and it doesn't bring in enough money to pay for itself.

There is one interesting twist. Szymanski and fellow economist Georgios Kavetsos found that people who live in countries that host World Cups get happier. After controlling for confounding variables, people tended to report higher rates of happiness after the Cup than they did before it.

The Brazilian government better hope that's true. There have already been some smaller protests across the country in anticipation of the tournament, and it's clear Brazilians are still unhappy about the country's direction.