Most doctors' donations used to go to Republicans. Not anymore.

Share All sharing options for: Most doctors' donations used to go to Republicans. Not anymore.

Back in the 1990s, doctors tended to donate to Republican political candidates more than the rest of the population.

Not anymore: a new analysis in JAMA Internal Medicine shows that, over the past two decades, doctors have shifted their political donations sharply towards Democrats. While this is a trend that shows up in the general population, its even more pronounced when you look at America's physicians. That's what you see in the graph below. 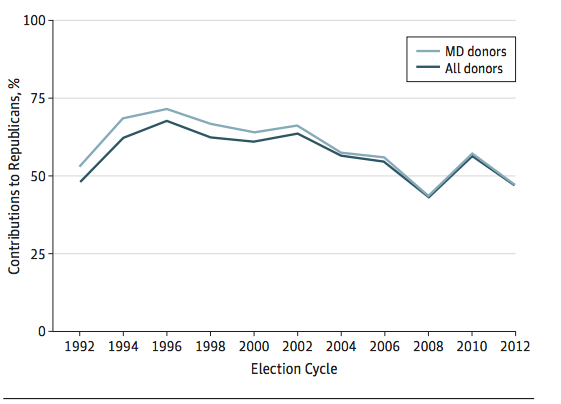 Giving to Republican candidates made up 68.6 percent of all donations in the 1994 election cycle, compared to less than half in the 2012 contest.

There was a slight increase in Republican donations during the first Obama administration, especially during the Obamacare debate. But whether that had to do with something specific to how reform would impact physicians is hard to know: as the above chart shows, the drop also appeared among all donors.

Most of the shift has been among primary care doctors rather than specialists. The majority of surgeons, for example, still donate to Republican candidates. Pediatricians are the ones who are drifting away from the party. 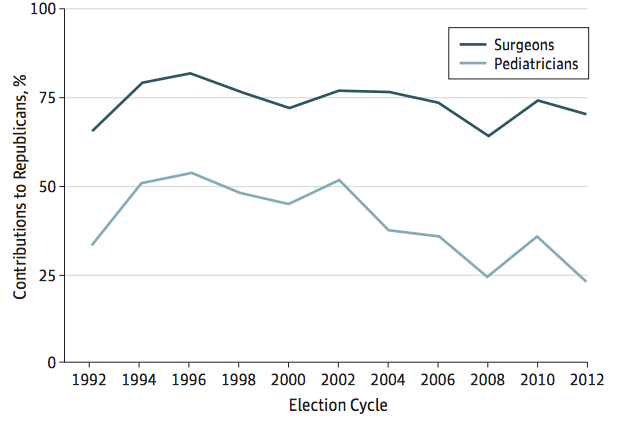 The best predictor of whether a doctor will donate Republican turns out to be salary. Orthopedic surgeons, who tend to have some of the highest salaries in medicine, are some of the most reliable Republican donors. Pediatric doctors, meanwhile, are lower earners — and fewer than a quarter donate to Republican candidates. 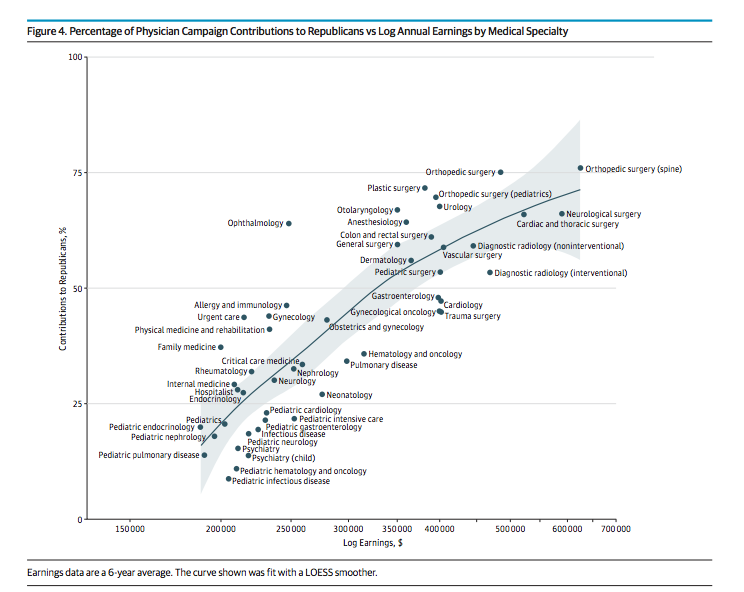 "These effects of income are particularly striking because most physicians have high earnings compared with the population at large," Adam Bonica, Howard Rosenthal and David Rothman write in their paper.

There is one notable doctor who was not included in the study: Dr. Miriam Adelson, spouse of casino owner and Republican mega-donor Sheldon Adelson. She contributed $43 million to Republican candidates mostly through SuperPACs.

"If Dr. Adelson's contributions had been included, the percentage of money contributed by female physicians to Republican candidates would have increased from 27 to 57 percent because her contribution was so large," they write.