Why you should take notes by hand — not on a laptop

Share All sharing options for: Why you should take notes by hand — not on a laptop

Walk into a college lecture these days and you'll see legions of students sitting behind glowing screens, pecking away at keyboards.

Presumably, they're using the computers to take notes, so they better remember the course material. But new research shows that if learning is their goal, using a laptop during class is a terrible idea.

It's not just because internet-connected laptops are so distracting. It's because even if students aren't distracted, the act of taking notes on a computer actually seems to interfere with their ability to remember information.

Pam Mueller and Daniel Oppenheimer, the psychologists who conducted the new research, believe it's because students on laptops usually just mindlessly type everything a professor says. Those taking notes by hand, though, have to actively listen and decide what's important — because they generally can't write fast enough to get everything down — which ultimately helps them learn.

The psychologists' new paper involved three different studies comparing students' recall after taking notes on a (non-internet connected) laptop versus by hand, with 327 undergraduates from UCLA and Princeton in total.

For the first study, the students watched a 15-minute TED talk and took notes on it, then took a test on it half an hour afterward. Some of the test questions were straightforward, asking for a particular figure or fact, while others were conceptual, and asked students to compare or analyze ideas.

The two groups of students — laptop users and hand-writers — did pretty similarly on the factual questions. But the laptop users did significantly worse on the conceptual ones: 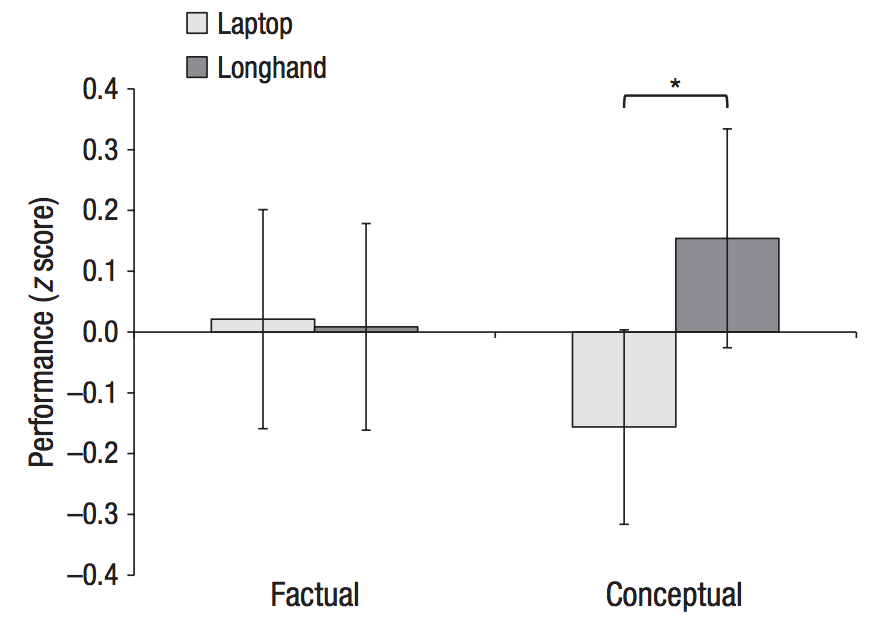 The researchers also noticed that the laptop users took down many more words, and were more likely to take down speech from the video verbatim.

To see if this rote note-taking was part of the problem, for the second study, they explicitly instructed some of the laptop users to do otherwise: "Take notes in your own words and don’t just write down word-for-word what the speaker is saying," they said.

The overachieving college students, though, were a heedlessly diligent bunch. Even in this study, the laptop users were once again much more likely to take down notes from the videos verbatim, and once again performed more poorly on the conceptual questions — whether they'd gotten the instructions to avoid word-for-word notes or not.

the laptop users performed similarly on factual questions, but significantly worse on conceptual ones

Both of these studies, though, eliminated a key benefit of laptop note-taking: the ability to look over a much more complete set of notes while studying. So as a final test, the researchers had students watch a seven-minute lecture (taking notes either on a laptop or by hand), let a week pass, then gave some of the students ten minutes to study their notes before taking a test.

Having time to study mattered — but only for students who'd taken notes by hand. These students did significantly better on both conceptual and factual questions. But studying didn't help laptop users at all, and even made them perform slightly worse on the test.

The researchers explain this by noting previous research showing the act of note-taking can be just as important as a later study of notes in helping students learn.

When done with pen and paper, that act involves active listening, trying to figure out what information is most important, and putting it down. When done on a laptop, it generally involves robotically taking in spoken words and converting them into typed text.

This new research suggests that even when students aren't doing anything else, taking notes on a laptop hinders their ability to learn. This is something of a surprise.

What isn't a surprise, though, is that real-life students that use laptops seldom focus on the lecture.

You probably know this if you've looked across a lecture hall recently. But in case you want confirmation from professionals, research on both undergrads and law students has shown that those who use laptops have something unrelated to class up on their screens around 40 percent of the time. Ultimately, they perform more poorly in classes and rate themselves as less satisfied with their college educations.

None of this is rocket science. You're on the internet right now, and there's a good chance you're reading this article while distracted from work you're supposed to be doing. I work on the internet all day and still find it immensely distracting — and at times, I turn it off to focus on something.

But the crazy thing is that the many college students being distracted by their laptops are simultaneously paying tens of thousands of dollars for the privilege of doing so.

Science and common sense are both pretty clear here. If you want to learn something from a class or lecture — or, from that matter, a meeting, conference, or any other situation where you're basically sitting and listening — you're best off taking notes with pen and paper.