Share All sharing options for: Being overeducated in your first job hurts you later in your career

College grads tend to get higher wages and have lower unemployment rates than non-grads. But especially during this economic downturn, lots of young college grads are taking low-wage, low-skill jobs because they can't find anything else. And as if that weren't bad enough, there's more bad news: the negative economic impact of being overqualified for your job can last for a decade or more.

In a new paper, economists from Duke University and the University of North Carolina-Chapel Hill find that even temporarily working as a bartender after college can be a drag on wages for years to come.

Economists looked at data from a long-term government survey of Americans who were 14 to 22 in 1979, examining how common "overeducation" was — that is, how often people are employed in jobs that typically go to less-educated people (a form of underemployment), and what effects overeducation has on people's wages throughout their working lives.

after one year of being overeducated, 66 percent of people remained overeducated for their jobs.

People were most likely to be overeducated when they first entered the labor force, but that fell over time. Over the first 12 years of work, the share of overeducated workers fell from 62.3 percent to just over half. In addition, women are slightly more likely than men to be overeducated, though researchers wrote that this might be because women chose flexible work arrangements more often and therefore were willing to compromise with jobs that require fewer skills.

It's also tough to get out of this trap. After one year of being overeducated, 66 percent of these workers remained overeducated.

The problems of this go way beyond feeling fulfilled at work. The wage effects of overeducation can last for more than a decade, as the researchers found for people with varying levels of post-high-school education. In the below figures, the black lines indicate people who entered the labor market overeducated. The gray lines are people who found jobs that were good matches or who were undereducated (none of the charts below, however, control for things like the overrepresentation of lower-skilled or minority workers among overeducated workers). For people with some college, four years of college, and some graduate education alike, there were big wage effects after 10 years. 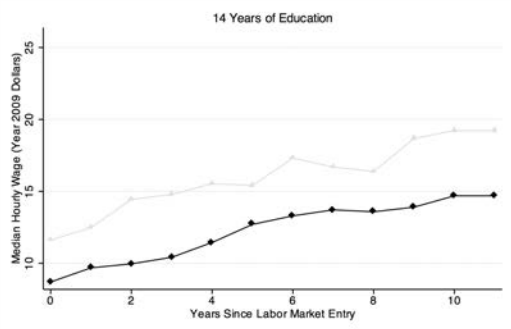 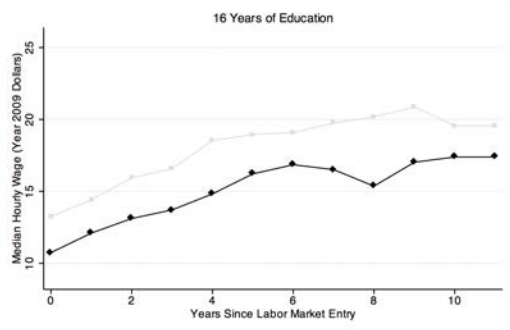 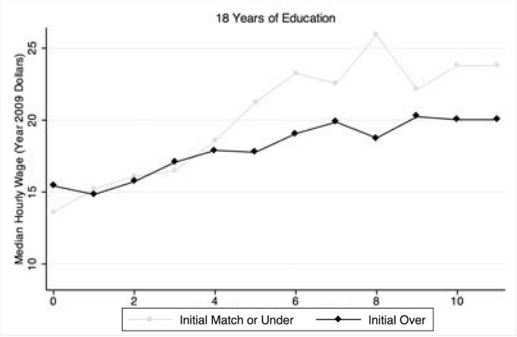 In addition, researchers found that while the wage effects of unemployment are larger than those of overeducation, the wage effects of overeducation can be more persistent than those of unemployment. Even when researchers controlled for a variety of factors, wage effects still could last for years after a worker left a position in which she was overeducated. If one worker was overeducated four years ago but is in a good position today, she'd currently have wages 2.6 to 4.2 percent lower than if she had never been in that bad job.

encouraging people to take any job they can get may not be the best tactic.

These results also imply one way the economy will continue to underperform, even as the recession continues to recede in the rearview mirror. If all of those overeducated people persistently earn well below what they could have otherwise earned, it means less spending and less growth as well, in addition to the fact that all of those overeducated people are underutilized human capital.

However, the study does leave a few things unanswered. For one thing, the researchers say they can't explain why the persistence of overeducation's wage effects are particularly worse for blacks and people who scored low on the Armed Forces Qualification Test. Likewise, they can't explain exactly why this overeducation effect happens: whether it's employer prejudice against people with overeducation spells, for example, or whether it's that being overeducated for a year or two arrests workers' skill development.

But one question will soon be answered: whether it affects engineering majors as much as philosophy scholars. The economists who did this study plan to examine next how this affects people from different fields.