GM just recalled another 8.4 million cars — bringing this year's total up to 28 million

Share All sharing options for: GM just recalled another 8.4 million cars — bringing this year's total up to 28 million

On June 30, General Motors announced that it would recall another 8.4 million cars in the United States and Canada for a variety of defects — including faulty ignition switches.

GM has now recalled more than 28 million cars this year — including 25 million in the United States. To put that in perspective, the entire auto industry recalled 22 million cars in the US last year.

The story all started earlier in the year, when GM began recalling millions of vehicles with a faulty ignition switch that could be easily knocked aside during drive and cut off the engine and air bags. That particular defect had been linked to at least 32 crashes and 13 deaths.

Since then, GM has come under heavy scrutiny from Congress for not recalling its cars quickly enough — as well as a variety of federal and criminal probes. And, in the meantime, the company has been recalling millions of other vehicles with additional problems.

Some of the cars, like those recalled on June 30, have also had faulty ignition switches. Others have had entirely unrelated problems, like trucks whose four-wheel drive could suddenly switch to neutral.

This recall frenzy hasn't been cheap. GM also announced that it would set aside $1.2 billion in the second quarter of 2014 for all its recall campaigns — bringing its recall expenses to $2.5 billion for the year. Generally when a car company recalls a vehicle for defects, it repairs the car for free and offers owners a "loaner" car to drive in the interim.

On June 29, GM also announced that it would offer at least $1 million to each of the families of the victims of the faulty ignition switch.

This chart shows the vehicles affected in the June 30 recall: 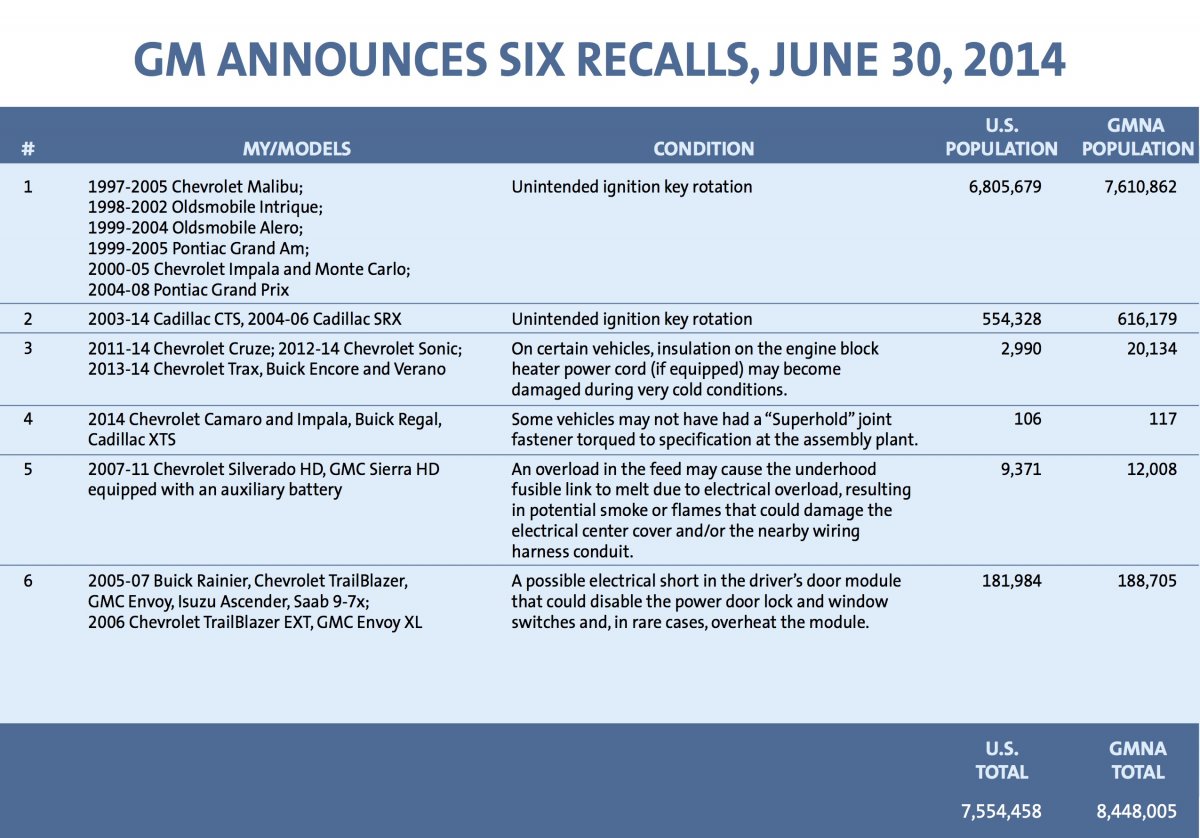 The automaker says that these models have been involved in seven crashes resulting in eight injuries and three deaths. GM also noted that these vehicles had faulty ignition keys that could turn inadvertently.

However, it added: "There is no conclusive evidence that the defect condition caused those crashes."