Where America's poverty is getting more and more concentrated

Share All sharing options for: Where America's poverty is getting more and more concentrated

Around 15 percent of Americans live in poverty, but a much bigger share live in areas where the concentration of poverty is particularly high. More than one-quarter of all Americans live in "poverty areas," places where more than 20 percent of the population lives under the poverty line, currently around $23,600 for a two-parent family of four, according to a new report from the Census Bureau.

One striking finding is that Americans living in these poor neighborhoods are more heavily concentrated in the southern US than anywhere else. 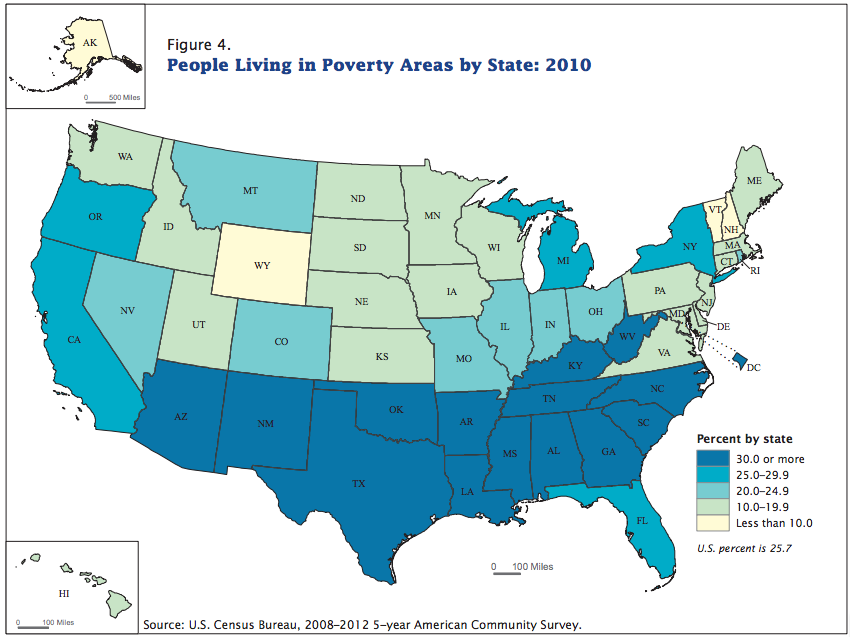 Broadly speaking, the South has long had a higher poverty rate than the rest of the nation. However, just 10 years ago, that solid band in the above map didn't quite exist. 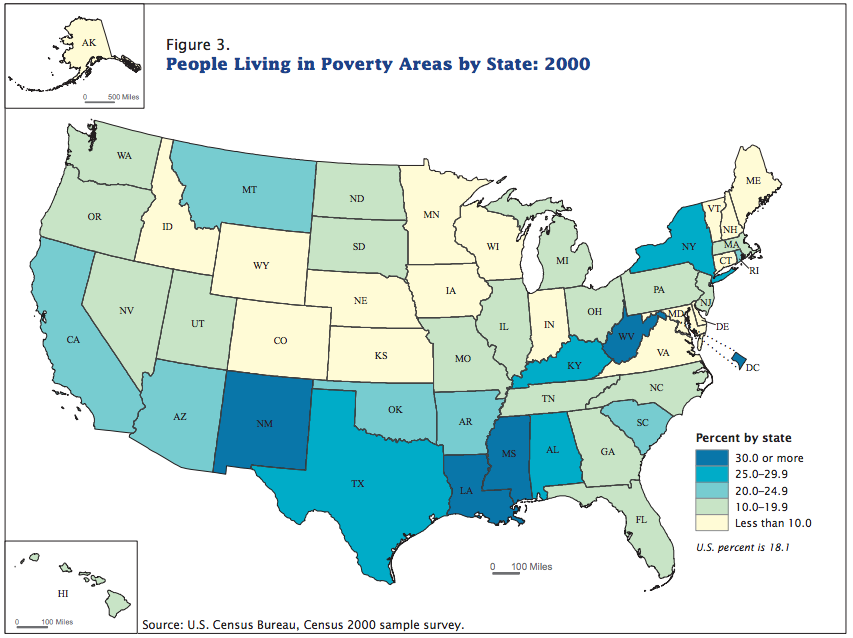 The dark-blue states are places where the share of the population living in a poverty area is 30 percent or higher, but the range can go much higher. In Mississippi, nearly 50 percent of people live in poverty areas.

It's not just the South, of course, where there have been big changes. The share of Americans living in these areas of higher poverty concentration has gone up dramatically, reversing an earlier downward trend. In 1990, 20 percent of people lived in poverty areas. In 2000, 18.1 percent did. Now, 25.7 percent do. And the share living in poverty areas grew in 46 states. And from 2000 to 2010 the US poverty rate as a whole went up as well, from 12.2 to 15.3 percent.

The South's poverty-area population did not, in fact, accelerate faster than any other area in the country — that title goes to the Midwest, whose share nearly doubled, from 11.7 to 21.5 percent. But the South has the highest share in total, at nearly 31 percent overall. Exactly why the South has such a heavy concentration of poverty areas results from a mix of complicated factors. Most obviously, the South has some of the highest poverty rates in the nation — more poor people can easily mean more poverty areas. But beyond that, low education levels, for example, can both result from and make for higher rates of poverty, and that is one major risk factor in the South. In addition, it's possible that the legacy of racial segregation and discrimination is working to keep African Americans in poverty in the South.

All of this matters because living near poverty can carry with it some major problems, Higher crime rates, for example, are associated with higher-poverty areas, as are worse housing conditions, worse public schools and worse health. In addition, economic segregation is correlated with lower economic mobility. If America's poorest are growing more and more concentrated, that could mean lower mobility (though importantly, these associations aren't causal), further entrenching these sorts of economic problems.

The results aren't just uneven geographically. Around half of all blacks and American Indians live in poverty areas, compared to just under 17 percent of white non-Hispanics and around 19 percent of Asians.