The Leftovers, Episode 1: The nuanced theology of HBO's new show

Share All sharing options for: The Leftovers, Episode 1: The nuanced theology of HBO's new show

Last night, HBO premiered its new summer series The Leftovers, which is based on a novel of the same name by Tom Perrotta. The series takes as its premise the mass disappearance of 2 percent of the world's population. In popular culture, this kind of disappearance is known by its Christian name: the Rapture. But as Perrotta has insisted, his rapture isn't the Christian one. Yes, he said, people will use the word "rapture" because it's the one they're familiar with when it comes to explaining mass disappearances. But he hopes Leftovers is able to "disconnect [the rapture] from its religious context," which he thinks is too "purposeful and clear," and lacking in "nuance and grief."

After watching the pilot, I can see that Perrotta was true to his word: his series is not about the rapture that Christians have been obsessing over for a century or two. For that matter, The Leftovers isn't even a show about a rapture — it's a show about loss. Which is to say, it's not a show about an event, but a show about the people left in the wake of that event. As Perrotta explained to the Times, that is a universal theme that should resonate with both religious and non-religious viewers: "We're always being left behind, we're always living in a world where there are these spaces where people we knew and loved used to be."

Still, the religious — and, in my opinion, deeply biblical — influence of the narrative is still lurking throughout the show. In some moments, this influence is blatant, in other moments it's merely winked at.

What makes The Leftovers different

The pilot opens up with a woman (Natalie Gold) trying to get quarters out of a change machine at the laundromat. Her nearby baby cries as she yells into her phone and curses at how uncooperative the machine is being. She makes her way to her car, puts her baby in the car seat, and buckles herself into the front seat, all the while talking into her cell phone, not really paying the child much mind.

Because I was familiar with shows premised on the rapture, I had a hunch that the mass disappearance was going to happen while the baby was screaming. And sure enough it did — but not in the cataclysmically GOTCHA! way I was accustomed to seeing it happen in rapture kinds of films. Planes didn't drop from the sky, trumpets didn't blast, there were no Hollywood explosions. The baby was crying in its car seat, and then it was gone. And then we realized someone else was gone. And then someone else. The drama began to mount, and within seconds, everything spiraled out of control. The screen went dark, and we began to hear overlapping 911 calls recounting the distress of those searching for their vanished loved ones.

"we're always being left behind"

Setting itself apart from all other Rapture stories, The Leftovers quickly broke two cardinal rules of the genre in this first scene: First, the departed bodies didn't leave their clothes behind, as is pretty much a stock trope in these kinds of stories; and second, some of those left behind were children. And as any good Rapture-ready Christian would tell you: no child ought to be left behind.

The show flashes forward three years after the scene at the laundromat — a significant length of time in the overall mythology of the rapture. According to certain interpretations of the Book of Revelation, after Christians are taken away to Heaven, a three and a half year period of peace will follow, after which all hell will break loose — literally. According to Revelation, the second half of the Tribulation will involve earthquakes and volcanoes and demonic locusts and dragons.

Of course, you'd have more luck finding fire and brimstones and monsters on Game of Thrones than Leftovers. If Perrotta thinks typical religious End Times dramas are bereft of "nuance and grief," that's certainly something he fixes with his series.

To be honest, rapture theology is lacking in subtlety and nuance, but that fault probably lies more with popular Christian writers than ancient ones. The Book of Revelation belongs to a genre known as apocalyptic literature, a forward-looking ancient Jewish literary genre that subversively critiques ruling authorities using highly coded and cataclysmic imagery. Apocalyptic narratives betray easy categorization, as their metaphorical elements are anything but straightforward. In contrast to actual apocalyptic literature, contemporary rapture stories collapse dense prophetic themes into one single myopic and manageable narrative that, for all of its magical predictions, betrays an enormous lack of imagination.

The Leftovers is probably more at home among the ancient genre, since it takes ambiguity as its starting point — what actually happened to the 2 percent of the population who suddenly vanished? Is there going to be another vanishing? Why were some bad people taken, and some good ones left behind? (As one character puts it, "I can understand the Pope, but Gary fucking Busey?") These questions, though, are never answered — and I have a feeling they aren't going to be. In one of the earlier scenes in the pilot, a press conference is held so a commission can present their findings regarding the cause of mass vanishings. The speaker introducing the conference quotes the philosopher Ludwig Wittgenstein: "Whereof one cannot speak, thereof one must be silent."

The characters, too, are dynamic and messy. The pilot centers on the family of Kevin Garvey (Justin Theroux), the police chief of Mapleton, the town in which Leftovers is set. Garvey is likable and seems morally centered, even if a quick flashback suggests a mistake or two in his past. He loves his family, which, post-Rapture, is falling apart. His son, Tom (Chris Zylka), won't answer his calls and has joined one of the cults that has sprung up after the vanishings of October 14. The leader of said cult is a guy named Holy Wayne (Paterson Joseph), who, in one of the better performances of the pilot, lets Tom and us in on a little secret: Things are about to get really, really bad. Or, as he tells Tom — while quoting an apocalyptic passage from the New Testament — "The grace period's over." That Scripture verse, tellingly, is also the tagline HBO chose for a promotional poster for the series. 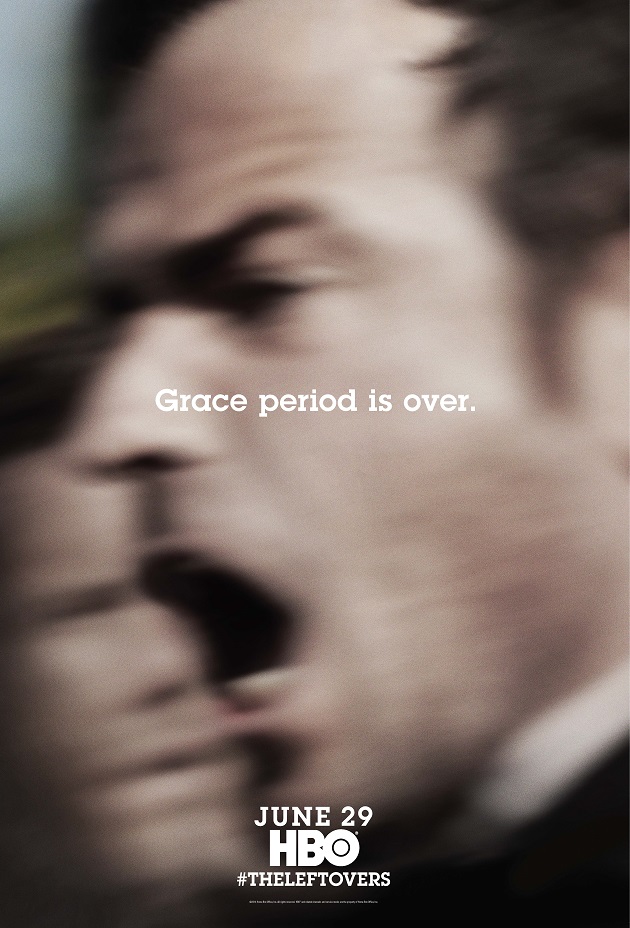 Garvey's wife, Laurie (Amy Brenneman), has also run away to join a cult called the Guilty Remnant, a group of a few dozen people that dress all in white and go around town chain-smoking, silently staring at those trying to move on and adjust to life post-vanishings. After just one episode, it's hard to figure these characters out exactly. What does seem clear is that they serve as prophetic voices — albeit, prophetic voices that don't actually talk. In their group home, various mantras hang on their walls: "We are living reminders," says one. Another explains their tobacco habit: "We don't smoke for enjoyment, we smoke to proclaim our faith." What exactly that faith is remains to be seen.

The ending of the pilot, though, might provide a clue here. Protesting the annual Heroes Day Parade given in honor of the vanished, the GR hold up letters that spell the phrase "STOP WASTING YOUR BREATH!" The phrase is certainly cryptic enough — is the waste remembering the dead, or not remembering them, or continuing living at all? — but it does seem to have something to do with their incessant smoking. Cigarettes, without diving into questions of morality, are a literal waste of breath. In a way, then, the Remnant are acting out the very judgment they are proclaiming on those left behind.

Again, this is where the biblical influence of The Leftovers is seen. In Judaism, prophets would perform symbolic actions meant to communicate a significant truth to their hearers. An example many people are familiar with is the Gospel account of Jesus ransacking the temple, which is an action the Jewish prophet undertakes to vividly enact what he thinks is God's judgment of the current temple system. Another lesser-known example is recorded in the book of Jeremiah: The Weeping Prophet dramatically smashes a clay jar, an action that he intends to symbolize the coming judgment of God upon Judah and Jerusalem. By performing their judgment of Mapleton, the Guilty Remnant position themselves squarely in the prophetic and apocalyptic tradition of speaking truth to power. And as is often the case with biblical prophets, their preaching earns them the violent wrath of their listeners.

Garvey's daughter, Jill (Margaret Qualley), hasn't followed the example of her mother and brother and left home just yet. But as the pilot makes clear, she could be leaving soon. In many ways, Jill seems like an average teenage girl trying her best to cope with loss and come out of it on the other side. Along the way, she gets distracted with — what else? — sex. After tricking her father into letting her take his car to a party, she finds herself playing a tech-savvy version of Spin the Bottle. The player spins the cell phone in the middle of a table, and when it lands on someone, a verb flashes on the screen telling you what you have to do to them. One player gets BURN, and proceeds to press a hot fork onto his target's arm; Aimee (Emily Meade), Jill's best friend, gets FUCK and proceeds to sleep with a boy Jill has a crush on.

Jill ends up having to CHOKE her partner, and the two of them head to the bedroom. When they get there, it becomes clear Jill doesn't really want to fool around with him, and they try to have a cordial conversation for a few minutes before the boy, in his underwear, asks if she will choke him while he masturbates. She obliges and places her hand on his throat, as he begins to pleasure himself. Jill stares at the ceiling while the scene continues, and, as the camera cuts closer to her, a tiny tear gently falls out of her eye. The regret and pain expressed in this moment stand in stark contrast to the wild hedonism of the partygoers in the other rooms of the house.

which of our families aren't coping with loss and managing grief?

The strongest scene in the pilot is a montage that flashed back and forth between members of the Garvey family. Kevin had just gone to see Laurie at the GR house, and begged her, to no avail, to "Please come home!" As he drives away, he calls his son, who is sitting, naked, on the bottom of a pool and screaming. Jill, meanwhile, is holding a picture of her family. The picture frame is broken, and she starts removing the shards of glass one at a time. In many ways, that's the story The Leftovers is trying to tell — how to clean up a shattered life.