The bees are dying. So here's how beekeepers are trying to fend off disaster.

Share All sharing options for: The bees are dying. So here's how beekeepers are trying to fend off disaster.

Since 2006, honeybees in the United States have been dying at alarmingly high rates. That's worrisome, since those bees pollinate some $16 billion worth crops each year, including apples, berries, cantaloupes, and almonds.

beekeepers have managed to avert disaster — at least so far

What's less appreciated, however, is that beekeepers have been working frantically to rebuild lost bee colonies and transport bees to where they're needed for pollination.

So far, those strategies have been surprisingly successful at averting an agricultural catastrophe, as Jo Craven McGinty of the Wall Street Journal recently reported. The grocery prices for foods that depend on bees has yet to skyrocket.

On the other hand, if bees keep dying off at very high rates, that good fortune could start to change.

How beekeepers have fended off catastrophe — so far

There's little question that bees are dying at elevated rates. Since 2006, commercial beekeepers have lost roughly 30 percent of their colonies, on average, each winter. Possible culprits include the parasitic Varroa destructor mite, poor nutrition due to a lack of crop diversity, and even pesticides.

But beekeepers have responded each year by working hard to rebuilding their lost colonies. Sometimes this is done by splitting healthy hives into multiple parts and repopulating the new hives with queen bees purchased from commercial breeders. Or beekeepers will buy entire packages of bees to rejuvenate damaged colonies.

In addition, commercial beekeepers will transport bees around the country to pollinate crops for a fee — particularly in places like California where colonies have plummeted. This past February and March, the Journal notes, some 1.6 million hives were brought to the Central Valley to supplement the honeybee shortage and pollinate 800,000 acres of almonds.

There's a catch, though. While bee transport can help pollinate crops, all that travel can put further stress on bee populations (and may be one possible factor in the mysterious "colony collapse disorder"). Here's a map of some of the main routes: 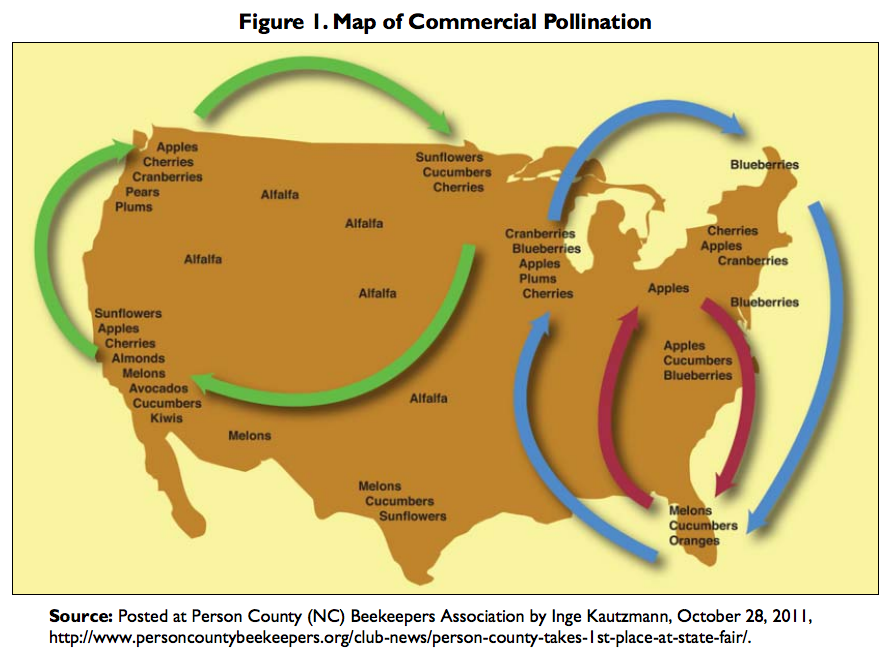 So far, these strategies seem to be helping to ensure that crops get pollinated and the food keeps coming. Grocery prices for crops pollinated by bees haven't really spiked in response to bee deaths, noted a 2012 paper by Randall Rucker and Walter Thurman of the Property and Environment Research Center (PERC).

These strategies have kept grocery prices from soaring

Rucker and Thurman observed that the rental fees for pollination services have risen only modestly since 2006 — a sign that honeybee deaths haven't yet led to a drastic shortage. The one exception is in pollination services for California almonds, although even those fees are a relatively small fraction of overall almond prices.

Prices aside, there's another intriguing stat that suggests that efforts to rebuild bee colonies are having at least some effect. The number of honey-producing colonies in the United States has stayed relatively stable since 2006 — when colony collapse disorder first appeared and bees began dying at high rates.

Shawn Regan of PERC first pointed this fact out in a piece for Quartz last year, and I've updated his chart here: 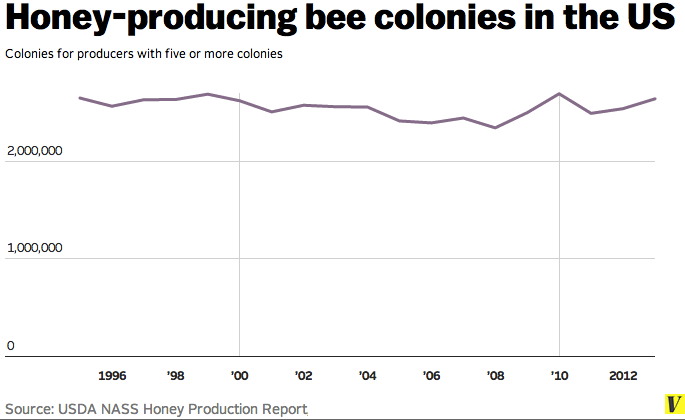 That said, there are a few crucial caveats to the figures in the chart above, as an April report from the Congressional Research Service explained.

The numbers on honey-producing hives aren't a perfect proxy honeybee populations in the United States — or the availability of pollination services. (And unfortunately, there's not great data on total honeybee populations.) What's more, there are signs that equally crucial wild bees are also in decline, a fact not captured in the chart above.

So take that chart with a grain of salt. It's a sign that beekeepers are rebuilding damaged hives, but not a complete picture of what's going on.

When will honeybee deaths become a problem?

Another key question, meanwhile, is whether efforts to rebuild lost hives — and provide pollination services around the country — will continue to compensate for elevated honeybee death rates and rising demand for food.

The Wall Street Journal piece noted that there are currently just enough bees to meet current pollination needs in the United States — but not enough to compensate if anything goes wrong.

Already, we're seeing strains: Last year, for instance, many honeybees transported to California for almond pollination were sick and demand was barely enough to keep up with supply. The almond harvest was only saved thanks to fortuitously good weather.

On top of that, as noted earlier, there's evidence that transporting bees all around the country is putting a further stress on honeybee populations and may be contributing to phenomena like colony collapse disorder.

And even if bee populations do stay stable, the Congressional Research Service report notes that they may struggle to keep up with rising demand for pollination services, particularly as the global population grows and crop demand rises.

That means figuring out what's killing the bees — and coming up with new strategies to rebuild lost colonies — will remain crucial. The US Department of Agriculture is already spending $15.3 million this year on research in this area, and the Obama administration recently asked Congress for an extra $50 million to help reverse the losses of honeybees and other pollinators.

Update: Added a link on the various stresses faced by bees that are shipped around the country for pollination.