Share All sharing options for: The barriers keeping immigrant parents from getting involved in their kids' education

Want a quick look at how immigration is diversifying America? Check out this map, based on a 2014 Migration Policy Institute report, of how many children under the age of 9 in each state have immigrant parents: 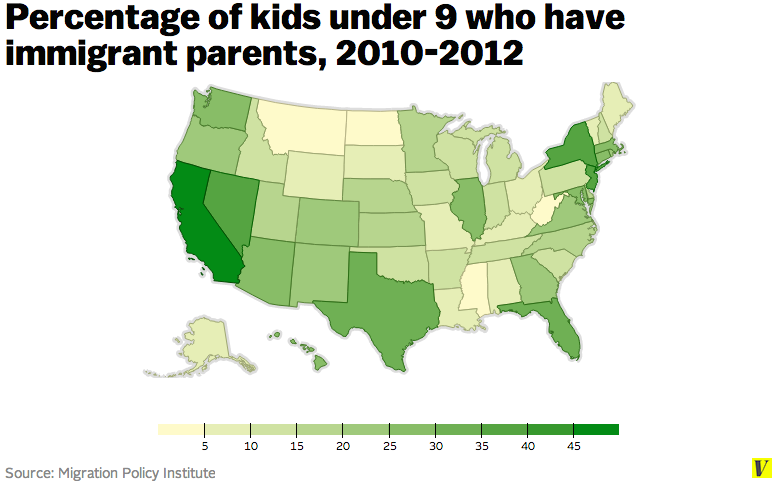 Children of immigrants can pose particular problems for early childhood educators and schools. Educators agree that parent engagement is one of the keys to getting young children to succeed in the classroom, and it's even more important in making that success last. Some research has shown that the benefits of putting a child through Head Start preschool disappear by third grade.

Many educators suspect that if they can teach parents how to help children with their academic work, the children will be able to keep their edge. But it can be particularly difficult for educators to engage immigrant parents. They're often low-income, have limited English proficiency, or feel that the school or community is a hostile environment.

How a language barrier between parents and teachers hurts kids

majority of the immigrant parents of young children surveyed for the Migration Policy Institute report said they had trouble communicating their questions, or giving input about what their children needed, to educators. Much of the time, parents struggle to communicate because their English proficiency is limited, and the school or daycare center doesn't provide enough resources in the parents' native language. (This is especially common for parents whose native language isn't common in their area.)

Sometimes, the language barrier can keep a parent from enrolling a child at all. Some of the parents surveyed for the report said that they were waiting for spots to open up at daycare centers that served native speakers of their language. They didn't want to send their children in the meantime to available daycare centers or Head Start programs where they felt alienated.

SOMETIMES, LANGUAGE BARRIERS CAN KEEP A PARENT FROM ENROLLING A CHILD IN EARLY EDUCATION AT ALL

Parents who don't speak English well might not know just how important they are in helping their children learn to read and speak it. Studies have shown that the most useful skill in helping a child learn to read a second language (i.e. English) isn't being able to speak it well already — it's being able to read in the child's native language. But when educators can't communicate this to parents, kids are less likely to get the home learning they need.

Even when educators make an effort to reach out to immigrant parents, though, it may not be enough if the general environment of the school or community is hostile to immigrants. Research shows that welcoming communities are important not just to helping immigrants integrate, but also to helping children of immigrants learn and succeed.

The Migration Policy Institute report doesn't mention the elephant in the room: it's harder for unauthorized immigrant parents to get engaged in their kids' educations. When parents are worried that any contact with a government employee will lead to their deportation, they're much less likely to show up to parent-teacher conferences or have long talks with Head Start supervisors. That's especially true when schools make an effort to make unauthorized immigrant parents feel unwelcome, by requiring them to get fingerprinted or show legal ID when they arrive at the school. And it can be exacerbated when federal immigration agents wait outside schools so that they can arrest parents after they've dropped off their children.