This past May, the country woke up to the news that two 12-year-old girls allegedly stabbed their friend to conjure up a mythological creature named Slender Man — a plan inspired by a story they read on a site called Creepypasta. Yes, that sentence is real. The 12-year-old suspects were charged as adults with first-degree attempted homicide, and could face up to 60 years in jail.

We understand you might have some questions about this confusing and seemingly unbelievable case. So here's a brief explainer:

What is Slender Man? What is a Slender man? 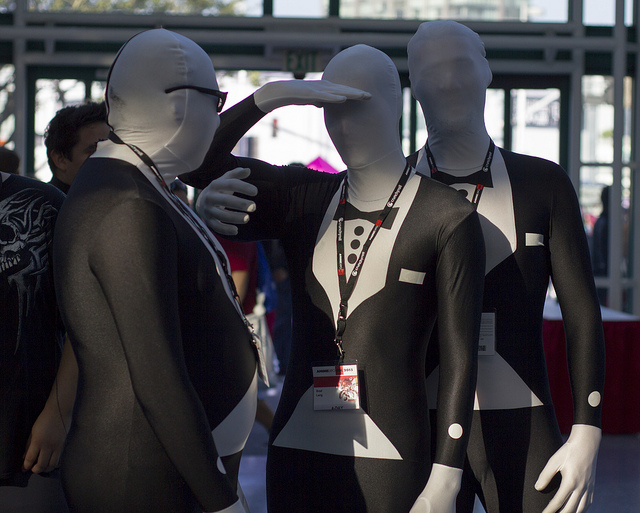 Slender Man is a fictional urban legend or horror story that was first created on an internet forum in 2009. Slender Man (also spelled Slenderman or Slendy) actually started off as a photo manipulation, by a Something Awful forum user named Victor Surge. The creature known as Slender Man has no face, no hair, is very, very thin and wears a dark suit (above).

From there, users began incorporating him into scary stories and urban legends, like Bloody Mary or other scary monsters you were probably told about as kids.

Instead of being passed around by word of mouth, the stories of Slender Man are passed around in horror story forums like Creepypasta, and Reddit's No Sleep. From there Slender Man made his way to YouTube videos like this one:

Like the variations on Bloody Mary and other urban legends, there is no strict Slender Man myth. This story portrays him kidnapping someone and whisking them away, sometimes he's jokingly portrayed like a Boogeyman-like creature, and this story paints a true, near-escape from a man that might be Slender Man.

Creepypasta. The name creepypasta doesn't seem very creepy or menacing. Its name comes from the days of email (like SPAM) when bite-sized horror stories were passed around from person to person.

Nowadays, that's evolved into sites like Creepypasta.wikia and Reddit's No Sleep forum where people post some of the scariest stories they can think of. And some of those stories involve fictional creatures like Slender Man.

Think of it as the way people share ghost stories in the age of the internet.

But those stories aren't real.

Yes. These stories are fiction. But that doesn't stop people on the forum from claiming they are real. For example in Reddit's No Sleep forum, there is a rule every story should be taken as real in order to keep the spirit of the forum intact.

But there's really no difference between stories you find on those forums and those found-footage horror blockbusters. Faux authenticity isn't a pass for murder nor does it create murder.

So these girls decided to kill someone to meet a fictional monster?

Well, according to news reports, the girls said that they were sacrificing their friend so that they could be taken by Slender Man and whisked to a mansion where they could live with him. In a sense, they made up their own myth. The AP reports:

The other girl told police they decided to kill her so they could become proxies of Slender Man, who would accept them and let them live with him in his mansion in the Nicolet National Forest.

The other girl said she sees Slender Man in her dreams. She said he watches her and can read her mind and teleport.

The girls allegedly tried to kill their friend during a game of hide-and-seek, and left her bleeding in the woods. The report adds that one of the girls said she had been planning this since December.

What's happening to the people that told/are telling these Slender Man stories?

Perhaps the most-telling or prescient perspective is from Slender Man's creator, a man named Eric Knudsen (a.k.a. Victor Surge). Earlier this year, Knudsen voiced that he felt like he lost ownership of his creation.

"I feel like I'm Slenderman's manager, and he's out there doing his thing, and I need to just kind of watch him and take care of him," Knudsen had said in January. Knudsen has not spoken about the attempted murder yet.

"In the 80s people would blame Freddy Krueger for their murders after the Nightmare on Elm Street series got popular. To see Slender reach that level though is both frighting and amazing."

A thing to remember is that there are thousands of readers who read sites like Creepypasta.wikia every day and don't commit atrocities like these girls did. You could make the same analogy to television shows, video games, and movies. And you could also make the argument that these girls could have easily been inspired by movies like Saw or Hostel.

The question of agency here is on those young girls.

Creepypasta.wikia, the site where these girls allegedly found this Slender Man myth, has issued a warning about how the site is fiction and that they can't control the action of these girls:

This is an isolated incident, and does not represent or attribute the Creepypasta community as a whole. This wiki does not endorse or advocate for the killing, worship, and otherwise replication of rituals of fictional works. There is a line of between fiction and reality, and it is up to you to realize where the line is. We are a literature site, not a crazy satanic cult.

The strange pocket of the internet where these stories come from is now bracing for a meltdown and some harsh scrutiny from people reading Slender Man reports.

Reddit has a forum specifically dedicated to the Slender Man. Some readers there have already expressed concern about the attention headed their way, while others tried to distance Slender Man from the girls' actions.

"If they were insane enough to think they could become 'proxies' I'm almost certain they would do something similar to this eventually, with or without slenderman," a user explained.

And one Reddit user equated the attempted murder and attention with the mainstream success of their creation." This isn't unheard of, in the 80s people would blame Freddy Krueger for their murders after the Nightmare on Elm Street series got popular. To see Slender reach that level though is both frighting and amazing," the user wrote.

That conjures up some scenarios like copycat crimes, or some mainstream movies based on this crime. And there's something chilling about his or her observation — that this attempted murder is a form of mainstream success for Slender.

On December 18, a Wisconsin deemed the two girls fit to stand trial. A joint preliminary hearing for both girlls is scheduled for February, WISN-tv reports.