Will Obamacare cut the $84.9 billion we spend on the uninsured?

Share All sharing options for: Will Obamacare cut the $84.9 billion we spend on the uninsured?

America spent $84.9 billion covering bills for the uninsured in 2013, a new analysis from the Kaiser Family Foundation shows.

A large chunk of that funding came from federal and state governments, who paid $53.3 billion to help offset the costs of people who showed up for care without coverage. Health care providers end up eating the rest. And Patients pay a significant amount, too: not included in the $84.9 billion figure is the $25.8 billion paid out of pocket by the uninsured themselves.

The new Kaiser data will likely be most helpful as a baseline to measure the effect of Obamacare, and whether the health insurance expansion is reducing this burden of uncompensated care.

The average uninsured person has $1,702 in bills they don't pay 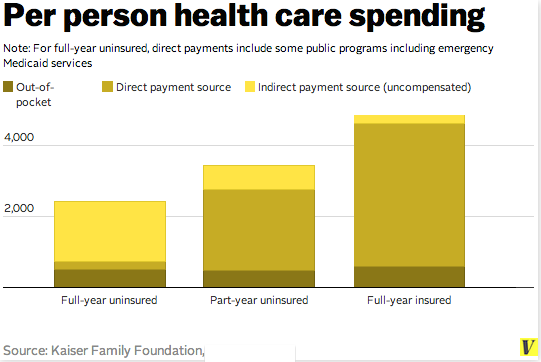 The uninsured tend to use significantly less health care than those with coverage, near certainly due to the financial barriers to getting to the doctor.

The vast majority of their health spending typically falls to third parties, whether that's the federal government or the hospital where they're seen (more on that in a moment). The average person who was uninsured for all of 2013 also spent $500 out of pocket on health care.

The uninsured use less medical care but they're footing a larger chunk of their bill: those who lacked coverage in 2013 paid 20 percent of total medical costs out of pocket, compared to 12 percent for those who did have insurance.

The federal government covers a lot of bills for the uninsured

There's a big chunk of care provided to the uninsured — $31.6 billion — that become unpaid bills for providers, with no program stepping in to help shoulder the cost. But that means providers do get paid for the other $53.3 billion of care they provide, mostly by the federal government.

Hospitals provide most of the country's uncompensated care 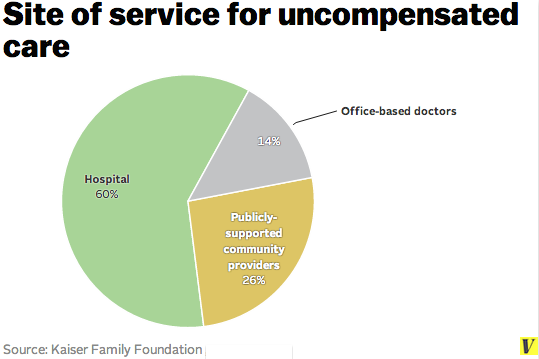 Sixty percent of uncompensated health care spending happens at hospitals. It's not totally clear that this is a product of more uncompensated care happening in hospitals, or reflects the fact that hospital care is really expensive. The average day in a hospital, for example, costs $4,293, way more than a typical trip to the doctor's office.

Will Obamacare fix this?

The early evidence does show that Obamacare is reducing the uninsured rate. 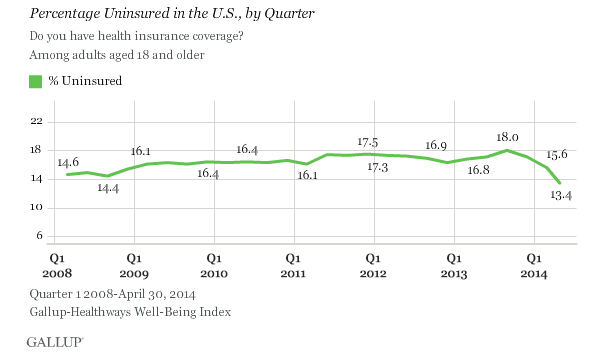 This means there are more Americans now who have someone to pay their health care bills than did in 2013.

The number might not increase as much as initially anticipated, however, due to states opting out of the Medicaid expansion. Hospitals in non-expansion states worry that they won't see the increase in coverage from more people joining the public program, but will have those cuts to the disproportionate share payments. That could shift the burden of paying bills for the uninsured from the government to the hospitals, without actually reducing the amount of uncompensated care.