The VA fires more people than other federal agencies

Share All sharing options for: The VA fires more people than other federal agencies

Lawmakers and veteran advocates are pushing bills that would make it easier for Veterans Affairs leaders to fire employees. The bills, supporters argue, would make it easier to hold VA officials, particularly health-care executives, accountable for the ongoing VA scandal.

A review of federal workforce data suggests that the Veterans Health Administration already fires a bigger share of employees — at least those classified as general schedule, instead of executive positions — than other federal agencies. 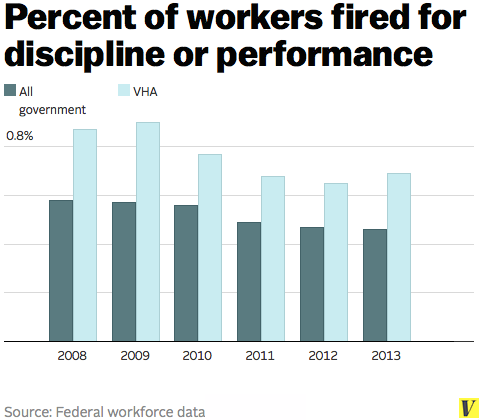 The trend, of course, doesn't mean that the VA is firing the right people or the right amount of people. The House bill, for instance, targets employees above those classified as general schedule. And the data, in fact, might suggest that the VA simply has a lot more bad employees than other government agencies, not that the agency is already doing a good job holding people accountable.

But if the scheduling problems prove to be systemic, as official investigations so far found, and the previous firing trend holds up, the VA's firing rate could climb to even higher levels as people are held accountable for the scandal.