Income from work is shrinking. Here's where Americans are getting more of their income now.

Share All sharing options for: Income from work is shrinking. Here's where Americans are getting more of their income now.

Americans' income from work is substantially smaller than it used to be. The Washington Post's Lydia DePillis today highlights a Wells Fargo report that shows Americans' non-labor income is growing, while their income from jobs is diminishing — in the 1980s, nearly 60 percent of American income was from work. Today, just over half is. 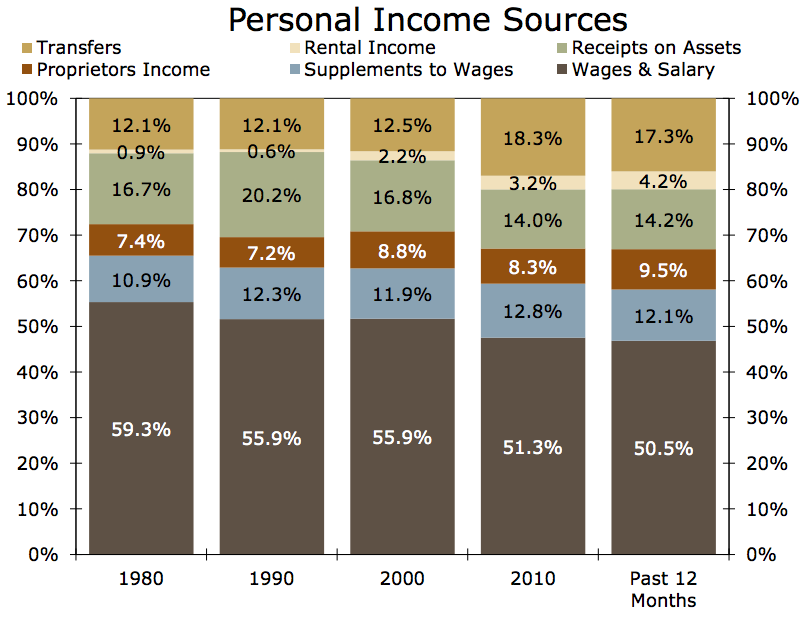 This trend isn't quite as catastrophic as it might seem at first; one key factor here is shifting demographics. The US population is aging rapidly, meaning people are leaving work and taking in more and more money from Social Security and Medicare (included in "transfers") and pensions (included in "supplements to wages and salaries"). Americans also appear to be supplementing labor income by renting out property.

the government's contribution to Americans' incomes has been on the rise for decades.

But then, a weak economy has also played a big role in this shift away from work income. Unemployment is still elevated, and an oversupply of labor for the available jobs has helped wages remain flat. The downturn also increased people's reliance on unemployment insurance (included in "supplements to wages and salaries") and transfers like food stamps.

The government's contribution to Americans' incomes has been on the rise for decades and is a key component of many poorer Americans' income, as the Brookings Institution's Gary Burtless wrote last month.

The growth of government-provided income is more than just a fascinating economic and demographic trend to watch, Wells Fargo's economists write: it affects the labor market by disincentivizing work. Flat wages plus more access to other sources of income equals less of a reason to seek out a job, in other words.

This really points to one troubling dilemma at the heart of the labor market's recovery: payouts do to some degree disincentivize work, which is one common argument against expanding policies like unemployment insurance. But if that's true, the fast growth of low-wage jobs may not exactly be luring people back onto payrolls.